It hardly seems credible that this revival was eight years (almost to the day) from the London premiere of Some Like It Hip Hop in this same theatre. Fashions change so quickly in youth-oriented urban styles but, as in her first full-length foray into hip hop dance theatre (Into the Hoods), the founder of ZooNation, Kate Prince has again hit upon a formula that appears to be timeless. So many hundreds of productions have come and gone in the intervening years, many now long-forgotten, but Some Like it Hip Hop remained freshly minted in the memory.

That original show led to the first-ever (and so far only) National Dance Awards for hip hop dancers when Tommy Franzén and Teneisha Bonner won the outstanding modern performance awards for creating the roles of Simeon Sun and Kerri. Alongside Lizzie Gough, they formed a trio of the most charismatic and popular performers in dance theatre, which elevated Prince’s concept into a blazing theatrical experience.

Franzén and Gough have returned to reprise their roles of Simeon and Jo-Jo but without the original Kerri since, having danced with Kate Prince’s ZooNation since its creation in 2002, Teneisha Bonner died just a few weeks before this opening following a private battle with cancer. What could have easily been a maudlin event, saturated with sadness, became a celebration, which is just as it should be, culminating with the entire audience on its feet joining in with the finale, dancing in the aisles to the title song. One of the many strengths of Some Like it Hip Hop is its song book, with generally catchy music by D. J. Walde and Josh Cohen and lyrics by Prince herself. I was still humming the show’s penultimate number Light Up several days’ later.

The title has an obvious allusion to Some Like it Hot, the 1959 Billy Wilder comedy in which Jack Lemmon and Tony Curtis cross-dress in order to hide amongst an all-female band to escape the mobsters. In Prince’s iteration, it is two women – Kerri and Jo-Jo – who dress as men in order to gain work in a walled city where books are banned and women are subservient. That gender-reversal aside there are few other similarities although Prince provides a clever reference to Wilder’s memorable sleeping car scene of bunk-hopping on the girl band’s overnight train with a similar scene of the new workers occupying bunks in a a male dormitory. In the film, the men barely disguise their gender through an all-night party (with Marilyn Monroe as Sugar); in the show, the girls hide in plain sight with one of them knocking out a macho thug in an initiation rite.

The Some Like it Hip Hop narrative concerns a dictator, known as the Governor (played with krumping-style menace by original Flawless member, Christian Alozie) who runs this joyless city, backed up by a bunch of thugs. Simeon is a book-collector who infiltrates the city alongside Kerri and Jo-Jo, as new employees, together with a young “stowaway” called Oprah. The hip hop show has romance in common with the film with both the cross-dressing stars finding love (although unlike Some Like it Hot, the love interests here are resolutely heterosexual). The revival of the romance between Simeon (Franzén) and Jo-Jo (Gough) is cute: Gough manages to look like the fifth Beatle with her mop hair wig, drainpipe suit and moustache.

Back in 2011, Franzén and Gough were hot properties in the world of commercial and street dance having been respectively runner-up and finalist in the first season of So You Think You Can Dance during the previous winter and they were drafted in as ZooNation guests for this show. Returning to their roles, both are performing stronger than ever: as dancers, in their fusion of street and contemporary styles; and as characters with charisma and chemistry. Franzén’s old-style locking sequences were tremendous.

The hardest job, however, must have been that of Jade Hackett (a veteran of Into the Hoods) who took over Bonner’s role as Kerri, interpreting it in a different way that made any comparisons pointless. She made the role her own and did so with distinction. If Gough was the fifth Beatle then Hackett’s goatee and curly wig put me in mind of the late, great Percy Sledge! Continuing the Beatles theme, the Merseyside accent of Natasha Gooden added to the enigma of Oprah, a supporting character who provides the key to unlocking the plot’s dénouement. In fact the plot unravels with confusing haste as the second act races to a finale (I found the two acts a little uneven).

Although not without its dark side – the Governor has, after all, blotted out the sun – Some Like it Hip Hop is full of quirky humour, great music and dance, enjoying top-notch performances throughout the whole cast of sixteen, and it was much enjoyed by a raucous audience. 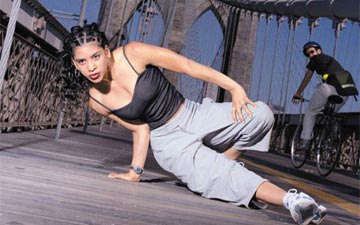 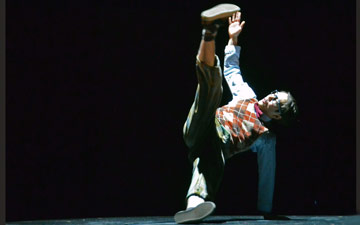 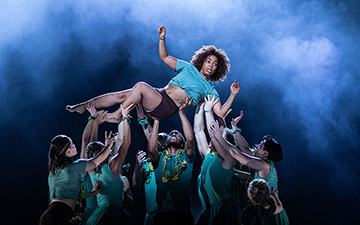 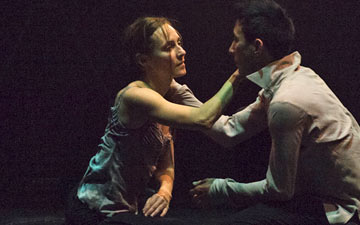