Sitting through both a matinée and an evening performance of the 14th Annual San Francisco International Hip Hop DanceFest on November 18th is the perfect antidote to the memorial service I attended the day before.  Both celebrate life, but Hip Hop does it in a kinaesthetic rather than cerebral way and I badly need to get out of my mind and vicariously into my body.  Think Zorba the Greek dancing out his pain and joy on the beach.

What so many dance forms, particularly Western ones, have lost, moving from community participation to spectator-centered theatrics, is the raw, visceral power rooted in the earth and the body.   I am always a bit bemused when I go to see classical ballet and the only time the audience gets truly excited is when male dancers throw themselves through the air with great elevation and wild abandon or a woman whips off a furious manège of turns around the stage or thirty-two fouettées on a postage stamp.   Would it really be bad form to have an entire performance filled with such stimulating moments?

Producer and artistic director of the festival, Micaya, certainly knows how to put together a show that can keep the audience paying attention and being vocal in their approval.   Obviously not all the performers are equal, but what one troupe might lack in technical prowess might be made up in wacky choreographic imagination, fabulous costumes or just the warmth and energy of youthful dancers excited to be onstage together.  With sixteen different companies on the two programs I can only write up the real stand-outs.   What really differentiates these programs from Clas/sick Hip Hop is that these are companies, groups of dancers who work together as opposed to solo dancers who come together only for a specific performance.  Yes, there are solos, but in the context of an entire troupe,  perfect unison by half a dozen dancers is just as powerful.

Entering the theater I see the pre-show has already started.  It’s a warm-up for all the dancers and they takes turns in the center showing off their best moves, not so much in rivalry but in mutual admiration.  Of the sixteen companies appearing on both programs I am most impressed by four in particular.  Lux Aeterna from Los Angeles performs an excerpt from Eponym to a score by Arvo Part.  The choreography by Jacob “Kujp” Lyons and the dancers is slow, deliberate, mesmerisingly fluid and, with the choice of music, illustrates just how far hip hop has evolved since the break-dancing to rap in the 1970s.   Solos alternate with duos and trios utilising intricate balancing formations worthy of the circus yet also with emotional content.

Hailing from London (UK) Boy Blue Entertainment first performs Blu-Nited Kingdom for the matinée and opens the evening show with Emancipation of Expressionism, both choreographed by Kenrick ‘H2o’ Sandy with assistance from Vicky ‘Skytilz’ Mantey and the company to music by UK Music.  These five women and three men do some of the tightest ensemble work of the entire festival.  Utterly focused, with razor-edged precision, they introduce themselves in a slightly-too-long piece, but later show a choreographically more complex work, full of contrasting textures – insanely fast then quietly thoughtful. One woman begins with intriguing finger movements that gradually travel up her hands and wrists until her entire arms are afire with movement which quickly spreads to the other dancers.

ILL-Abilities Crew performs No Limits in both programs to wild cheering and standing ovations.  All five men have physical disabilities and have chosen to pursue dance on their own terms, creating choreography that highlights their individually amazing skills.  When San Francisco’s own Tommy “Guns” Ly first spins and flips his way through his opening number I have no idea that he has any challenges at all until the voiceover tells of losing his leg to cancer and shattering his dreams of being a hip hop dancer.  Then he removes his prosthetic leg and performs some more, equally difficult, moves.  Their mantra is “no excuses, no limits” and like companies such as AXIS Dance Company of Oakland or Candoco from London, both mixed ability troupes, ILL-Abilities shows us that what is there is much more important than what’s missing.  In fact, it’s the only thing that does matter.

When Illstyle & Peace Productions from Philadelphia hits the stage in ***KINGZ***  the dancers’ polished athleticism and deep feeling is instantly apparent.  Brandon “Peace” Albright’s choreography is fun and witty but also creates community and a desire for peace. It’s obvious that at least one dancer has some comprehensive ballet training.  My colleague Renée Renouf later confirms after to speaking to some company members in the lobby that indeed they all take ballet classes.  (Now we just need more ballet dancers to take hip hop to loosen them up and get them in touch with their bodies.)

Two weeks later I’m at the Yerba Buena Center for the Arts Forum for Clas/sick Hip Hop featuring Rennie Harris and Daniel Bernard Roumain (DRB).  This mini-festival is the brainchild of Marc Bamuthi Joseph, Director of Performing Arts at YBCA in an attempt to answer the questions: “How do we measure the trajectory of classic American movement vocabulary beyond academically defined structures?”  and “Where does contemporary social dance fit in this trajectory?“ The first half of the program hophes to show that this form of street dancing is participatory and we are invited to get out on the dance floor.  However, as soon as one of the official cast begins moving, everyone else stops to watch and forms a tight circle around the dancer.  Unless you happen to be in the first three rows of spectators, you are forced to climb to the top of the risers in order to see anything at all.

The second half is more successful in that we now get an unobstructed view of the performers from the comfort of our seats, plus they have ten times more floor area to use.  Roumain and Matthew Szemela on violins and DJ Elan Vytal provide the musical accompaniment to a round robin of battles between Rennie Harris, Marquese “Nonstop” Scott, Arthur “Lil Crabe” Cadre, Ana “Rokafella” Garcia, Levi Allen (AKA I DUMMY), and Ladia Yates.  Having Harris, one of the forefathers of hip hop, is akin to casting Marius Petipa as Drosselmeyer in a local Nutcracker production.  Now an “elder”, whatever he may lack in sheer physical audacity he more than makes up for in mature artistic expression.  Lil Crabe is a technical wizard, combining contortion and acrobatics into mind-bending shapes, though without much soul.  Rokafella, one of a growing number of women in a style formerly dominated by men, can crank it out with an athletic flair and Yates manages to meld many types of dance from ballet to belly dance into her own eclectic style.  Nonstop and I DUMMY are the ones I can’t take take my eyes off.   I DUMMY entrances you with his  rubber arms that ripple and carve out shapes on all sides of his torso.  He is a physical poet, a master of his body and soul.  But Nonstop moves totally absorbed in his own world, every gesture comes from deep within, and his body is his means of communication which you must listen too, to the exclusion of all other voices.

For more about the evolution of hip-hop see:
en.wikipedia.org/wiki/History_of_hip-hop_dance 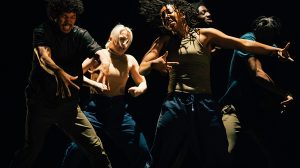