There are many alternative Nutcrackers out there, but hands down, Nutcracker Rouge has got to be one of the all-time best.

The operatic cabaret is a lush, opulent, rococo revue combining ballet, baroque, burlesque, aerial and acrobatic choreography with pleasantly unpredictable musical variety. The vaudevillian holiday mash-up is, for all its saucy nudity and raucous romping, a class act.

Nutcracker Rouge is a feast for the eyes, especially if you love satin, ribbons, bows, corsets, glitter, sequins, pasties, diamante codpieces, thongs and flesh. The costumes look like an Ellen von Unwerth photoshoot (perhaps for Chantal Thomass) run riot. Zane Pihlstrom’s sets and costumes, so essential to a boutique production, cut no corners, and in the intimacy of the Minetta Lane Theatre – with performers traipsing through the aisles – the ruched satin and sequins look just as lavish up close as they do in the dusky spotlight.

Much like the Trocks, Company XIV subverts tradition with a lot of love, knowledge and irreverent reverence. Austin McCormick – the creator and choreographer–uses a mixture of music, including excerpts from both Tchaikovsky’s and Duke Ellington’s Nutcrackers, in addition to 1950s bubble gum pop and operatic renditions of contemporary pop songs. The mixture of high-and lowbrow art forms is skillfully done. In today’s post-post-post-post-modern world, McCormick’s production is reminder of the definition of entertainment: to provide amusement, to delight, to provide diversion. Far from superficial, the result is deeply satisfying.

Shelly Watson’s Madame Drosselmeyer is a warm, brassy emcee. With as many costume changes as Cher, she makes the audience feel welcome and is a nuanced entertainer. She ushers Marie, played by a Laura Careless, into the Land of Sweets, introducing the innocent waif to a wanton wonderland.

The snowflakes wear white tutus, black masks and antlers, with 18th century-style court heels. The “Dance of the Mirlitons” is transformed into a “Cherry” burlesque act with three women in bright red platform bras and glittering red wigs. McCormick’s choreography is better than anything Bettie Page did, and not because it is more contemporary or more revealing, it is just better: dancier, more complex, more athletic. The smooth transitions between steps is far more absorbing than what is usually done to this music.

The Spanish number in this year’s production is a real highlight. McCormick uses an opera singer to perform Lady Gaga’s hit single “Alejandro.” Sung in Spanish, with high quality vocals, “Alejandro” is transformed into a song of exquisite yearning. Devon Rainey dons a papier mache bull mask and matador pants, which, by the end of the number, Marie has lustfully unzipped.

Marie spends a lot of her time in a druggy, overwhelmed haze of sensory overload. But she gets to show off her Royal Ballet School chops (McCormick’s cast boasts numerous masters degrees and top notch training) in the exhilarating final pas de deux with Steven Trumon Gray, her Nutcracker Cavalier. After Marie performs a solo exhibiting her erotic education courtesy of the Land of Sweets, she and the prince tussle in a passionate pas de deux to Tchaikovsky’s bittersweet music. Marie spins like a top before falling into his arms like a Christ figure at the peak of Tchaikovsky’s crashing crescendo. They go over and under each other, and finish it all with the traditional, all-important fish dive. Tchaikovsky’s adagio for the grand pas is deeply moving, so much so as to be funereal (legend has it his beloved sister died shortly before he composed this section), and McCormick’s sensual choreography captures the tenuous relationship between love and death, a certain romantic absolutism – that feeling that one might die without this person.

Other jaw-dropping moments include an aerial acrobatic hoop act to an all-French, operatic rendition of Sia’s “Chandelier,” an aerial duet for two males, and countless examples of peerless pliability, especially in the male dancers.

McCormick has panache: not only is he a good choreographer, he is a master orchestrator. Rouge is well-paced and ironically tasteful rubbery schlong included, a rare feat indeed. 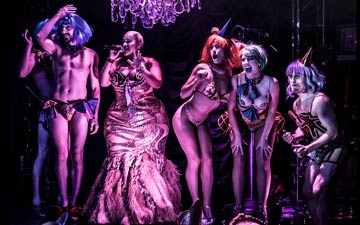 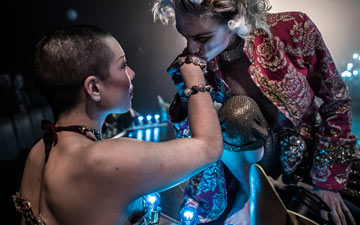