Choreographer Gerald Casel describes his new work, Splinters in Our Ankles, as an exploration of the tinikling, a lively folk dance of the Philippines. To perform the tinikling, quick-stepping dancers hop between and over bamboo sticks that are moved rhythmically by people crouching on the ground and holding the ends. Casel, a first-generation Filipino-American, recently discovered that the upbeat dance is a heavily-loaded bowdlerization: it originated as a method of ankle-breaking abuse waged by 16th-century Spanish colonists against enslaved farmers in the Philippines.

Nothing resembling the tinikling, nor even referring to it, appears in the evening-length Splinters, which had its world premiere on Friday, December 18, at ODC Theater. Instead, Casel plumbs the ripple effects of colonization by openly colonizing the ideas of other choreographers. Projections on the back wall identify some of his appropriations: William Forsythe’s room-writing improvisation technique, Jeanine Durning’s “nonstopping” move-and-talk exercise, Trisha Brown’s work Set and Reset, Warhol Superstar Nico and Fleetwood Mac’s song “Dreams.”

In a recent interview, Casel said that he has come to think of choreography itself as a colonizing act, through which a dance maker “asks dancers to adapt to a … belief system that is not theirs.” In response, the first of Splinters’ two 40-minute halves was created by the dancers through Forsythe and Durning’s exercises, improvisation and other channels, with restrained input from Casel. The second half deliberately echoes Brown’s 1983 work, down to the slack arms and straitened shoulders, shimmy-shakes and high kicks, and a couple of pairs of wide-leg trousers. Casel wants to know what the result of his re-appropriation will be.

From an audience point of view, the result is a fairly dry, albeit well-crafted and beautifully executed, academic exercise. A Juilliard-trained former dancer in Lar Lubovitch’s and Stephen Petronio’s companies, Casel proves himself a keen distiller of other artists’ ideas, an endeavor that can bring the essence of a choreographer’s style into informative relief. But without apparent subversion, what is posited as reclamation reads as homage, or an investigation of the nature of creative borrowing in general. That goes more to issues of intellectual property and artistic integrity, and at that point we are separated from the anguish of colonization by many orders of magnitude.

Casel’s dancers make Splinters worth watching, independent of the critical theories at hand. Though diversely trained, they moved as though from one school, even in energy and weight, balanced and elegantly postmodern. They walked and talked during the first half – echoes of Forsythe and Durning – in a murmuration accompanied by composer Tim Russell, who sat downstage with a keyboard and tapped out abstract rhythms and ambient sounds recorded in the Philippines. Stone-faced, the dancers moved around and past one another like unattached ions, swirling their arms, opening a leg from front to side retiré, or lowering to the ground, only sometimes forming covalent duets and trios.

After intermission, in the derivation of Brown, Jack Beuttler’s projections of horizontal bamboo stalks were the only inkling of Splinters’ origins. A duet between Peiling Kao and Parker Murphy expressed the dynamism that an idea can inspire, a tug-of-war between equal and opposing energies. They merged back into the ensemble with Arletta Anderson, Kristen Bell, Christina Briggs-Winslow, Rebecca Chaleff, Janet Collard and Kevin Lopez, and over time they all came and went in myriad formations, visually potent but diminishing in returns. Eventually, Splinters simply came to an end. 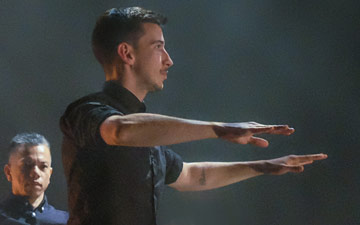