The gap left by the departure of Alexei Ratmansky’s Nutcracker for the West Coast – where it seems to be enjoying a successful run – has been filled this year by the return of Mark Morris’s now classic The Hard Nut. Made in 1991 for the Théâtre de la Monnaie, it was Morris’s farewell to Brussels, where the company had spent a productive, if embattled, three years. In short, local audiences and reviewers never really took to Morris’s irreverent style. With The Hard Nut, he gave them one last piece of hard candy to break their teeth on.

Here in New York, the production is beloved. The opera house at the Brooklyn Academy of Music was packed on Dec. 17, and the show received a standing ovation. Throughout, laughter echoed through the theatre. Everyone knows the jokes, everyone laughs. As with the Balanchine version, the Hard Nut’s success is a foregone conclusion.

As the performance revealed, there are good reasons for the production’s enduring success. The party scene, set in a 1970’s suburban American home as seen through the eerie lens of Charles Burns’s illustrations, is a marvel of individualized detail. The guests, all adults, misbehave, make out in the corners, engage in high-energy dances (à la Soul Train), drink too much, and flirt. Madame Stahlbaum (sweetly played by former company-member John Heginbotham) is besotted with Herr Drosselmeier, understandably so: As played by Billy Smith, he is elegant and impossibly handsome, the courtliest gent you’ll see this side of the Kingdom of the Sweets.

Everything in the first act has been updated: Drosselmeier’s mechanical toys are replaced by a giant Barbie doll and her robot pal; a fire blazes on the TV screen; Marie’s presents include a Barbie dreamhouse and battery-powered car. Even the fantasy scene that follows – the battle between the mice and toy soldiers – has a twist. The soldiers are dumb GI Joe dolls with giant muscles (one shoots himself in the foot), and the mouse king looks like Elvis, open shirt, Dracula collar and all. Yes, it’s broad, and, at times fails to make full use of the music, but it works. The witty, imaginative costumes are by the late Martin Pakledinaz, whose death in 2012 is a great loss to the theatrical world.

The second act is less defined, and, to my eye, much less cohesive. Instead of following the simple narrative of the Alexandre Dumas version of the story, Morris has gone back to the E.T.A. Hoffman version, The Nutcracker and the Mouse King, which is darker and more fantastical, but also more difficult to recount through dance, despite the dancers’ best efforts. Morris structures it as a play within a play. Marie has fallen ill and Drosselmeier proceeds to sit at her bedside and tell her the story of Princess Pirlipat and the Rat Queen, whose bite renders her monstrous. This condition can be relieved only by the appearance of a man who is able to bite the hardest nut without terminally cracking his jaw. Morris takes advantage of the parallels with Sleeping Beauty to drop in a mime sequence reminiscent of the evil fairy Carabosse’s soliloquy – she will be grow up to be beautiful but she will die! Cue evil laugh. (This is one of various ballet references; there is also a spinning bed, like the one in the Balanchine version.)

The second act is confusing, and never quite settles into a good flow. There’s a lot of filler, too. Too much music is wasted on Drosselmeier pleading and wandering around in search of the hard nut. The national dances are generally disappointing, with the exception of the Arabian dance, in which a veiled belly-dancer woos Drosselmeier with her over-emphatic seductions, flanked by 4 sheiks in blue gowns and aviator sunglasses. (You can see Morris’s hilarious rendition of the belly dance on the commercial dvd.) Here, the role was danced with libidinous gusto by Laurel Lynch.

But, for all its broad humor, The Hard Nut also has its moments of profundity and inspiration. The snow scene, in which the dancers (both men and women) leap and spin across the stage in their unisex silver tutus and halter tops, spraying snow with every accented step, makes you want to laugh and cry, all at once. In its final moments, the dancers shoot across the stage from both corners, crossing at the midpoint, spewing snow. Then, they do it twice as fast. Pure kinetic thrill.

Then there are the two extended pas de deux, a rarity for Morris. The one for Marie (the diminutive Lauren Grant, a convincing ingénue) and her Nutcracker prince (the modest and dignified Aaron Loux) is playful, flirtatious, and touching. But it’s the duet for Drosselmeier and the Nutcracker boy (again Loux), in the first act, that really gets to you. It begins like the bird duet in Morris’s L’Allegro, with one dancer shadowing the other, behind a scrim. Then the two men come together, holding hands and supporting each other in slow, aching balances. This is love at its most profound, an enigmatic love that is neither erotic nor filial, but epic, almost interstellar. It is perhaps Morris’s most classical, and most idealized, two-person dance.

So, while uneven, this is a Nutcracker with much to relish, not least its “reunion” aspect: Many of the roles are taken by former company-members, including Kraig Patterson as the sassy French maid, teetering on her pointes. (Lots of gender-neutral casting.) Morris, as the paterfamilias, is exuberant and warm, like a favorite uncle with a weakness for cream puffs. June Omura, now a high school English teacher in real life, is irrepressible as Fritz, a hyperactive boy with a soft spot for his mother.

All is bound together by the musicality for which the Mark Morris Dance Group is famous. The score sounded fresh, vibrant, and beautifully shaped under the baton of Colin Fowler. The high, childish voices of the Hard Nut Singers, placed in a balcony to the left of the stage, were innocent and lovely. The whole evening felt like an intimate, raucous holiday party. 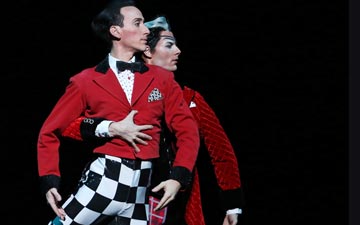