Until now, Noche Flamenca has presented more or less straightforward flamenco evenings, a succession of solos and musical numbers leading up to an explosive soleá for Soledad Barrio, the ensemble’s lead dancer and raison d’être. But recent seasons have included experiments: tightly choreographed numbers built around a dramatic theme. There have been masks and theatrical lighting effects. It turns out that all this was a preparation for the company’s first fully staged flamenco play, Antigona, based on the Sophocles tragedy. The show, which is being performed at the West Park Presbyterian Church, had its première last summer and is back for a second run through Dec. 23.

Noche Flamenca isn’t the first flamenco group to try its hand at telling stories. Antonio Gades, in particular, made an entire career out of adapting plays for the dance stage. Flamenco is an innately theatrical form. Themes of death, loss, and defiance are pervasive in the lyrics of the songs. The world of Greek tragedy is not far off. The angular shapes and the pounding rhythm of zapateado, the syncopated footwork typical of flamenco, only adds to the intensity of the storytelling.

So it’s no wonder that Noche Flamenca’s adaptation of Sophocles should work well on many levels. (The director is Martín Santángelo, Barrio’s husband. Barrio is responsible for most of the choreography.) Barrio is a mesmerizing performer, whose natural habitat is tragedy. Antigona builds up to a death dance, which she performs with a frightening force. Her body folds and morphs into a series of twisted shapes. She becomes a mess of arms and legs and sweat; it is more an exorcism than dance.

But the show is more than a vehicle for her dancing. The concept—a musical retelling of the play with danced interludes illustrating various scenes—is effective. (Supertitles translate the lyrics of the songs, adaptations of Sophocles’ text.) The performance space, a run-down church with crooked wooden balustrades and misty lighting, feels eerily right.

One of the most effective elements is also the most innovative: the inclusion of a dancer specializing in krumping, a particularly ferocious form of hip-hop dancing that includes shape-shifting moves that look like something out of the The Matrix. Robert Wilson, a krumper who has worked on TV and in music videos, plays Eteocles, one of Antigone’s brothers, who kills Polynices, Antigone’s other brother. Their battle, set to the electric guitar of Hamed Traore, is a dramatic tour de force, muscular and wild. Wilson is acrobatic and threatening, and moves with the weight of a giant. His opponent, the flamenco-dancer Carlos Menchaca, is scrappy and hard-edged, like a caged animal. Later, Wilson returns as a kind of angel of death.

There are other inspired touches: A ghostly dance for two veiled women. A shouting match between the blind prophet Tiresias (the gravelly-voiced Pepe El Bocadillo) and Creon, Antigone’s uncle and enemy, played by Manuel Gago. “You have offended the gods!” cries Tiresias, inches from Creon’s face. “Who are you to judge? You are just a blind peasant,” spits Creon. Creon dies alone, the fate, the show implies, of all despots. (He is Francisco Franco, Mussolini, and Hitler all rolled into one.)

These are the dramatic high points. But the show is still somewhat rough around the edges. It could be shorter. Not all the dances are well integrated into the story. The character of Haemon, Antigone’s sweetheart, feels superfluous, as does the couple’s “love dance,” which, in addition, isn’t particularly loving. (How does zapateado express love?) Ismene (Antigone’s sister) is depicted, incongruously, as a sort of catty mean girl who gossips flippantly about her family’s misfortunes. She seems to have alighted in the midst of this sturm und drang by mistake.

The show is good enough that one wishes it were even better. And, with some nips and tucks, and a bigger budget, I have the feeling it could be. 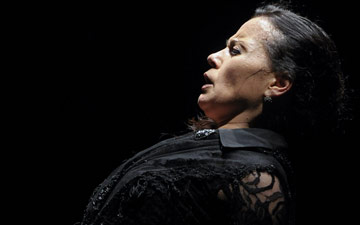 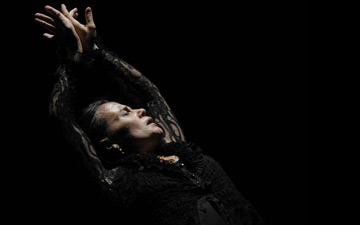 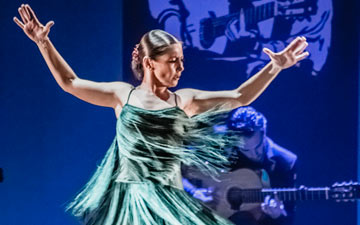