Whatever Rita Moreno takes; I want some. The Puerto Rican entertainer, perhaps best known for her portrayal of Anita in West Side Story (although her film career goes all the way back to 1950, including the role of Zelda Zanders in Singin’ in the Rain), is one of several guests appearing on film to celebrate the fiftieth anniversary of Ballet Hispanico and – at 88 – she looks amazing (appearing younger than the Company she praises); the only concession to the years being a pair of spectacles to read her notes.

Tina Ramirez established Ballet Hispanico initially as a dance school for New York City’s Hispanic diaspora, quickly becoming a community-based performing arts ensemble. Since those beginnings, in 1970, it has developed into a major dance company albeit one that has remained close to those formative roots; now occupying state-of-the-art facilities – combining the school and company – in its Upper West Side HQ.

Culturally, the company has to tread a fine line between the traditions of the Latin communities for which it was formed and an innovative quest for experimentation in modern dance. Under the leadership of Cuban-American Eduardo Vilaro since 2009 it seems that Ballet Hispanico has matched these twin aspirations as evidenced by the material in Noche Unidos, a night of dance and unity; this virtual fundraiser to commemorate the half century that combined new dance on film with plenty of chat and a guest appearance by Gloria Estefan singing a catchy new ballad – accompanying herself on the guitar – from her beachfront home, entitled We Needed Time, which she had composed during the pandemic.

The dance opened with a solo by Vilaro entitled Serenata, choreographed to the clarinet playing of Paquito D’Rivera, who was superimposed on film onto the studio wall to accompany the lyrical dancing of Laura Lopez. Next up was a new duet by Michelle Manzanales entitled CautivadX, danced al fresco by Jared Bogart and Simone Kameresi, a couple filmed presumably on their own front porch before hitting the countryside. The youthful Moreno introduced a new work by Annabelle Lopez Ochoa, Pajarillo Escondido, a solo for Dandara Veiga, which continued the choreographer’s theme of filmed dancing in window alcoves, which we have seen in her second zoom choreography Avec le temps (for two dancers at Dutch National Ballet).

I particularly loved Orilla, an enigmatic duet for Chris Bloom and Gabrielle Sprauve, which was full of gorgeous cinematography, superbly edited, filmed on a beach and outside a church, created by Andrea Miller in collaboration with the dancers. I also enjoyed the arresting sexy mambo with choreography by Nancy Turano, Mambo for 50, danced seductively by Lenai Wilkerson, alternating between garden and studio to the infectious rhythms of Mambo Goomba by Yma Sumac. I could watch Wilkerson’s swaying hips and arms on non-stop repeat.

The style shifted to the surreal dance theatre of Brit-based, Gran Canaria-born, Carlos Pons Guerra in Gazpacho, created on Antonio Cangiano and Omar Rivera who provide a kitchen-based routine to making gazpacho seemingly inspired by the peculiar culinary skills of Hannibal! It was danced to the great sound of the late Marifé de Triana singing Maria de la O. Like Lopez Ochoa, Pons Guerra has an unerring ear for great music.

Following Estefan’s anniversary present of her song, along came Pedro Ruiz’s Sobre El Siglo De Las Luces, danced in the studio by an attractive couple, Melissa and Lyvan Verdecia. The final dances were nods to the future, performed by two pre-professional award-winning students – firstly in a flamenco-inspired piece by Kiri Avelar for Ruby Castillo and then an excellent and energetic African-Cuban tribal dance performed expressively by Julienne Rane Buenaventura to choreography by Rodney Hamilton. And finally Vilaro showed some neat salsa moves of his own, replicated over zoom by audience members, while proving US TV comedy writer Norman Lear’s observation that Vilaro has the biggest smile in the western world! Other segments included Vilaro’s interview with Lear and Mexican jazz musician Arturo O’Farrill, and his son, Adam, riffing some cool jazz, respectively on piano and trumpet.

In addition to this concert, Ballet Hispanico has been especially busy offering “watch parties” throughout the pandemic, including Lopez Ochoa’s Tiburones (Spanish for sharks). This titular echo of the film’s gang name plus filmic setting (the clapperboard snapping shut like Jaws was the clue) combined with voiceover references to Puerto Ricans must surely reference West Side Story. But, the choreographer twists it inside and out, shining the spotlight on stereotypes in race and gender in a portrayal that culminates in the director (surely a Weinstein reference) getting his comeuppance in a hail of high heels. Another “watch party” worth catching is the double-header of Hispanic flair in CARMEN.maquia by Gustavo Ramirez Sansano and the sizzling Club Havana by Pedro Ruiz. All of these works should still be freely available on YouTube.

One silver lining to the pandemic has been getting to see companies online that I have been largely unfamiliar with and Ballet Hispanico is a real find: great dancers; great material; new and innovative choreographers choosing memorable music. What’s not to love! I can’t wait to see them perform live. 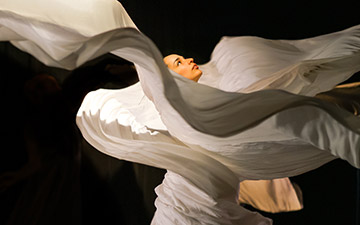 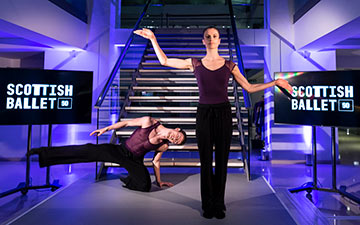