In April of 2019, when dance was so often seen live, I had the pleasure of catching up with Jody Sperling’s Time Lapse Dance, after a time lapse myself of about six years. Sperling is a scholar of and interpreter of Loie Fuller’s 20th-century style of using fabric and lighting to make swirling movements that suggest flowers and fire, as well as a postmodern choreographer. I had seen her early work a number of times. Now, in 2019, she had trained a company of women in Fuller’s style and used her interest in global climate problems to create beautiful dances that suggested wind, air and ice patterns.

In the Covid-19 April of 2020, Time Lapse Dance’s 20th anniversary season had to be online instead of in person. The company, like larger ones, had an array of offerings, but I concentrated on the videos of particular dances, which emerged in stages. First to emerge was Wind Rose, A Study in breath & atmosphere, a 2019 premiere for five women in white and Sperling in black and featuring a score by Matthew Burtner. It was lovely and well recorded, but I still kept feeling, especially the first time I saw it, that, like almost all dance I’ve been seeing online, it was better seen live.

Single Use, a solo new dance by Sperling in a costume made of plastic bags to suggest how damaging they can be to the environment, was danced and videoed post-lockdown on a block of Manhattan’s Broadway between 99th and 100th Streets that I know well, and that familiarity intrigued me in a way that would be closed to most viewers. It was Ice Cycle, a spectacularly lovely 2015 dance, also with a score by Burtner, and also seen last year, that seemed most special because the online video transcended the usual distance I’ve been feeling with online viewing with close ups that made it seem that I was within the swirling silk patterns made by the dancers.

Wind Rose had some of that quality, too, particularly in its last section which followed Sperling’s solo and the longer initial section in which shadows figure prominently (and less impressively on video). But Ice Cycle online seemed to have a different, but equivalent magic to what I had seen live in a way that is very rare.

It starts in the dark with a glimpse of the composer, occasionally seen later, too. A projection unrolls, and then we see a dancer whose white skirt, projected, unrolls endlessly, like an icy scroll. She revolves quickly away. Three women in gray, white, and black unitards dance until the woman in black leaves and another dancer whirls in with a full white cape that she funnels and flowers. A second woman joins her and a third. With strong and immensely fluid arms and sticks that greatly increase the wings of fabric, the dancers wave and revolve their swirling white silk volumes.

As with many dance videos, the camera pulls away and then in again, intriguing from a distance, compelling when you feel a part of the swirl. Jody Sperling in black joins a single woman in white, sometimes echoing or enclosing her. She’s black ice, with wings, or the encircling sea – Ice Cycle was ”inspired by Sperlings’s experience dancing on Arctic sea ice,” and is intended to express “the fragility and dynamism of the polar icescape.”

The dancer with the endlessly unscrolling fabric returns, leaving a swathe of what might be fabric or might be projection. It’s hard to tell at first, and that’s part of the magic of this piece. Behind this swathe of white a dancer in a black unitard dances, shadows or projections forming on the white band. When her arms go over it, we know it’s real fabric.

A dancer in the huge swirling white silk costume flowers behind the white band, her swirls taking on projected color – green, blue, mixes of the two, pink, red, briefly gold, and back to fire red, then green and blue. The patterns of color and fabric are beautiful.

A couple of dancers in white, then three, do unison swirls, with veins of blue projected, like veins in icebergs perhaps, though ice never moves like this. Sperling in black joins two of these swirling women in unison, too. Burtner’s score, which includes bell and wind sounds, tinkles. Sperling solos until replaced by three women in white sleeveless, translucent open robes over white unitards. They strongly project bare arms or turn, making the same movements without the magic silk wings, until one woman is left. Sperling shadows and encases her with her enclosing black silk. It’s ice melting, the sea taking over.

Jody Sperling/Time Lapse Dance will be continuing its anniversary season with a live performance on the afternoon of September 17, 2020 on West End Avenue between 91st and 92nd Streets. Part of WE WALK: Streets for Connection, Plastic Harvest, like Single Use, is “themed around plastic pollution.” Sperling and three other dancers “in costumes fashioned from plastic bags” will each “inhabit a world of her own creation.” I plan to be there. 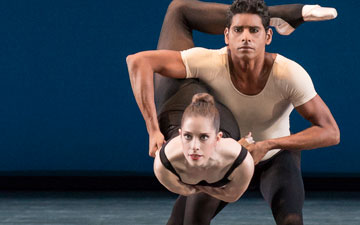