Every once in a while, an audience exits a theatre feeling deeply alive. Lit. Satisfied. Big Dance Theater’s anniversary show is programmed with the canny sensibilities of a master chef, transporting one’s taste buds across the gamut of flavors and textures but never forgetting the tart tickle.

Big Dance: Short Form features five short, disparate works – all New York premieres this season – seamlessly staged together at the minimalist concrete venue The Kitchen. Since 1991, Big Dance Theater has played with, you guessed it, dance and theater in the vein of Bausch-ian tanztheater but, at least in this anniversary program, there is less pain than Bausch and more play, a welcome whimsy and punch. Each work exhibits the vitality and ingenuity of Artistic Director Annie-B Parson’s choreography and the imaginative heights reached in collaboration with co-director Paul Lazar (Intermission, Goats). Brevity plays a large part in the success of this program: nothing is long enough to get tedious. The wit and wonder of these new shorts shows dance theater, in the hands of BDT, as a form with seemingly unending potential, without a dead end in sight.

Summer Forever, while not a tragic piece, is a strange form of sunny. Tymberly Canale wears a hodgepodge of knitted garments and an electric log fire holds court onstage. The music, a sound collage by Tei Blow, incorporates crashing death and doom metal, spurring Canale to at turns cry and laugh. She is at her most gleeful when the heavy metal is ascendant, romping around like a child left alone in the playroom, all giddy catharsis to what many people still consider Lucifer’s music.

Although the copy describes Short Ride Out (3) as being inspired by Stravinsky’s Concerto for Two Pianos, II, Blow’s score, created in collaboration with Eben Hoffer, grooves like post-Kraftwerk band Neu! Dancer Aaron Mattocks performs a taut, coiled, propulsive work of skipping, slides and jumps. The most enticing move was his waddling moonwalk, a sideways slither that highlighted a pair of tight buttocks in white pants, as if he was shimmying with his rear end. There is a slight OCD mania about this brief piece. The frequent and precise hand gestures – which suggest framework, show and tell and a desire for presentation – exhibit Mattocks as diligently showing us all of his dance moves [and I will do this and this and this and this and this]. Later he dons a white tutu, making his jumps feel all the loftier.

One of Big Dance Theater’s saving graces is that the show is not nearly as pretentious as the program makes it sound. The third work, Resplendent Shimmering Topaz Waterfall is described as being “Based on page 79 of ‘Costume En Face’ notebook notations of work by Tatsumi Hijikata [considered the founder of Butoh theater] transcribed by his disciples, published by Ugly Duckling Presse.” Samuel Pepys and Mark Twain also get program mentions. But Big Dance is perhaps best enjoyed sans program. One really can sit back, relax and enjoy the show – the performers do the work for you. Each piece in Short Form is introduced by a brief narration, typically in a fleeting, humorous and self-deprecating fashion. The longer the blurb, the faster it is read, much like the fine print orators of drug or contest advertisements.

The waterfall in Resplendent Shimmering Topaz Waterfall is a bag of ice hoisted up above a metal bucket. It drips plaintively while Paul Lazar – his face powdered, his body dressed in a cloak of knotted rag ribbons – putters around in a spotlight. Lazar’s movements are miniscule, nervous, but also calm. He fidgets, fusses then relaxes. Canale, in a folksy red knit hat and otherwise drab clothing, creeps up on him from out of the shadows and gives him his slippers. He dodders like an old man dreaming of his glory days, courting the ladies, shaking his moneymaker.

The wittiest short, The Art of Dancing, takes its cue from Samuel Pepys’ diaries, staging the initially innocent and subsequently tense and frosty situation involving Pepys’ wife and her “dancing master.” Opening with Pepys and his wife curled up on the floor center stage, Elizabeth DeMent and Mattocks both wear metallic lame pants (Mattock in gold, DeMent in silver), voluminous white blouses and 18th century wigs resplendent with bouncing curls. Mattocks provides comical narrations straight from the diaries, while DeMent prances around with courtly gestures.

Pepys grows increasingly jealous in the diaries, eventually firing the dancing master after finding him, not dancing but talking with his wife, alone, when it was “almost night.” Parson’s staging of this is superb – minimal but effective. DeMent singles out phrases from the diaries and doesn’t speak so much as breathes them into a microphone with unbridled desire and passion: “dancing master,” “alone,” “almost night” while striking rock-star, Freddie Mercury poses on a seedy, hot pink stage.

Intermission, a 15-minute birthday party for the troupe, is bound to get a lot of press. Lazar plays emcee inviting the audience down to the stage which is filled with balloons, a ping-pong table, Twister and refreshments that include beer, Sunkist orange soda, Twizzlers, mini hot dogs, and pretzel sticks. He schmoozes with audience members, interviewing them with the microphone while the audience mills around, bemused, bewildered but smiling. The participatory pleasantries are over all too fast.

Goats is an abbreviated, post-modern but no less effective rendition of Johanna Spyri’s Heidi. Playing a frustrated theater director with anger management issues, DeMent marches around the stage ordering her minions to do her bidding in rehearsal. Anyone who has performed with a troupe – theatrical, dance or otherwise – can identify with the haggard tedium that accrues with each scene. Parodying your worst nightmare of a high school’s annual drama production, the lines are delivered with real aplomb; it takes great skill to be this bad, and Big Dance had its audience in stitches. But it isn’t all straight laughs: DeMent’s exasperation is very real, and Goats, while cracking jokes, also taps the melancholic ennui that so often accompanies artistic effort. 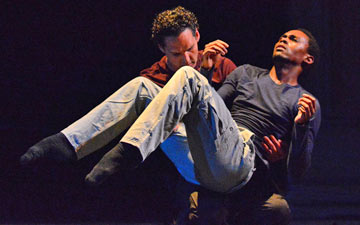 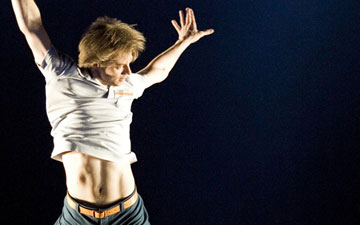 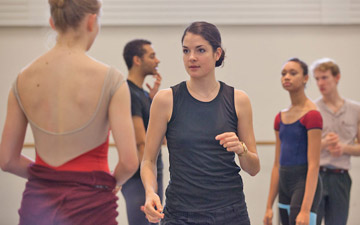