I first met Brooklyn Mack in warmer climes at the International Ballet Festival in Havana at the end of 2014 and was most impressed with his spitfire attack, squeaky clean technique and charisma in the Don Quixote and Diana and Acteon pas de deux, partnering National Ballet of Cuba’s super-ballerina queen, Viengsay Valdes. He certainly made his mark that night and the Cuban audience roared their approval and excitement.

Today he is a member of The Washington Ballet, but this frosty January, he has been a guest with English National Ballet dancing four performances of Le Corsaire. And he’s been a hard man to pin down for an interview. In the few days since his arrival here in London, Brooklyn has been kept very busy with the general dress rehearsal (as Conrad) and first night performance (as Lankendem). He also was cast as Conrad for the second night, the Sunday matinee and one more performance, before his return to America at the end of the week. We met in the London Coliseum after he had had a full afternoon stage rehearsal, but he was as friendly and full of smiles as he had been in the Cuban sunshine.

Born in 1986 in Elgin, South Carolina, Brooklyn was the youngest of four siblings by eight years, and football was his first love. However, his mother had other plans and every time he asked her to drive him to football try-outs, she found different excuses. As fate would have it, when he was 12, Brooklyn’s school took its pupils on a field trip to see a charity ballet gala. “I remember that there were a lot of amazing dancers, and I was very impressed,” he reported. “I had previously watched a documentary on TV about footballers talking about their training, and ballet had come up. They said it helped their balance, agility and speed, and I wondered if there was truth in this. After all, the dancers I had seen on stage were athletes too. So I told my mom, if she would take me to the football trials, I’d go to ballet, then she would see how serious I was about football. She agreed. I was thinking, I’ll take it for a month, two months and become a master at it, then I’ll take up football. How wrong I was! I was perplexed by ballet. It was far, far more difficult than anything I had ever done. I had always been good at everything I tried, and generally excelled at it. But ballet wasn’t like this at all. I was determined to do well.”

Brooklyn’s mother researched all the ballet schools in the area and decided on the Pavlovich Dance School. “We turned up and my mother walked right up to director Radenko Pavlovich, and said, ‘I would like you to give my son a scholarship’. Taken aback, he answered, ‘We don’t give scholarships.’ But my mom didn’t stop there, and to my embarrassment retorted, ’Well, you haven’t seen my son.” I marvel now at her sheer boldness, as I had never danced a step! He looked at her, and took me into a studio where I was shown some barre work. I was in socks and gym shorts. When we came out, he said, ‘His legs are OK but his feet are terrible. But I will make a deal. If he wants a scholarship, then he must come six days a week.’ My mom then asked me, ‘what do you want to do?‘ And I replied, ‘alright’ –and that’s how it started.

The school was a long way from my home and I would drive with my mum to her job at the hospital at 6:15 each morning, wait an hour there, taking a nap if possible, before catching two buses to my Montessori school. I finished my academic classes at 3:30 and took two more buses to the ballet school where initially I just did class, but later I had repertoire and rehearsals so that I’d be returning by bus to the hospital, where my mom had done a double shift, and we’d get home around 10:30pm. Other times I would go and stay with my godfather in West Columbia. It was a long day but I had been bitten by the ballet bug and was always looking forward to class – I’d tell myself, ‘This is the day I am going to master this’. There were 23 girls in the class with just two boys, so there were no older boys to watch for inspiration. However, I would go to the library each week and check out every ballet book and video I could find, and watch fabulous male dancers such as Nureyev, Bujones, Baryshnikov and Ruzimatov dancing, and they gave me inspiration. I did get to play backyard football with friends at the weekend –and they never teased me about doing ballet, though one girl did. She was called Stephanie and she teased me one day, and asked me out the next!” (Big chortle.)

Brooklyn studied there for two years, then received a scholarship to the Kirov Academy of Ballet in Washington DC. “It was very, very strict and structured, almost militaristic! But it was also great training.”

There were more boys at the Academy but Brooklyn was the only black male student at that time. “I used to think about only being seen by my colour when I was younger. And I was genuinely worried about it at some point. But I suddenly decided, ‘I want to be good because I am good and not because I’m black – that’s it!’ I don’t think about it anymore. Dancing transcends skin tones – it’s what you give and present that counts. It’s amazing that there is so much prejudice – some of it covert, some overt – still today in 2016, especially in America. There are so few black dancers who have made top rankings such as Arthur Mitchell, Lauren Anderson of Houston Ballet and recently Misty (Copeland from American Ballet Theatre). Misty’s promotion and all that press coverage for ‘the first black principal ballerina at ABT’ is a double-edged sword. On one hand, she is an inspiration for young hopeful minority ballerinas-to-be by showing them that they can do it too if they work hard. On the other, if we are all equal, why should this hit the headlines in such a mammoth way as it did, rather than seeing it was because of her talent. When you are on stage what is truly important is the artist that you are. But there are too few young dancers coming up and I think one issue is getting less attention from teachers, along with the problem of self-confidence – it’s so easy to doubt yourself, especially in ballet, where everything is about perfection. Nowadays, I feel fine going into a new company – it wasn’t always like that – but I concentrate on achieving in my dancing. I am quite comfortable in my skin.”

“Three years later I graduated and went on to be an apprentice at Joffrey Ballet, Chicago where it was a completely different style and repertoire since we all came from different schoolings. After a year I went to ABT Studio Company, which was more like home. There were better classes and great teachers and coaches.”

Then it was south to Orlando Ballet in Florida, directed then by Bruce Marks. “It had American rep – a bit of everything with its training and repertoire, though Bruce gave us classes in the Danish technique – boy, they were hard! I had received many invitations from director Septime Webre to join Washington Ballet and when I discovered that Bruce was leaving Orlando, I checked the forthcoming rep at Washington, liked it and went there. I’ve now been dancing with the company for over five years.”

In April 2015, he made his debut as Siegfried in Swan Lake with guest Misty Copeland as Odette/Odile – and that made headlines. (DanceTabs review)

Over the years, Brooklyn has travelled all over the world, proving himself at many top international competitions, picking up bronze, silver and gold medals, as well as a Grand Prix and the Princess Grace Fellowship Award. And he has been a guest with other companies. He performed Le Corsaire with ENB this past autumn when the company was on tour and had a shock awaiting him when he arrived. “I had already done one rehearsal as Conrad with Laurretta (Summerscales) and when I showed up at my next rehearsal, Loipa (Araujo) said, ‘Do you want to show me.’ The schedule had just said the name of the ballet and not the roles. When I asked what section of the ballet we were now doing, she said ‘pas d’esclave’, (Lankendem’s role). I thought, I don’t do this! I hadn’t known that I was dancing that role too. I asked to watch the other couple who were rehearsing with us, and then did it.’

Time was marching on and the bar area where we were sitting was filling up with that night’s audience. As we were concluding, a lady approached Brooklyn and told him enthusiastically how wonderful he had been on first night as Lankendem. ‘You looked just like Jimi Hendrix with your hair band’ she told him, which made him laugh heartily. ‘I wish you could stay longer here,’ she added. But he is looking forward to learning Forsythe’s In the Middle when he returns home, though his great dream is to dance Manon. And he was about to take his mother out to supper. She had come over from South Carolina to see her son dance – and she must have been proud of him here in London, and for her own role in starting her son off on his highly successful international ballet career. 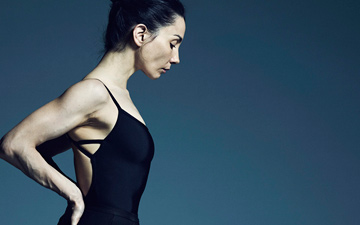