The production is a gripping piece of dance theatre that fully succeeds in realizing the dramatic promise of the elusive Shakespeare play, taking the audience on a wild and emotional rollercoaster ride in the course of its three acts. (The National Ballet co-produced The Winter’s Tale with Britain’s Royal Ballet, which premiered it in London in 2014.)

“The Winter’s Tale” is one of Shakespeare’s more complex and lesser-known plays. It’s a cold tale of power, madness, and obsession – a saga of a royal household torn apart by the sick imagination of a deranged monarch. At the heart of the story is Leontes, King of Sicilia, who out of the blue accuses his pregnant wife, Hermione, of having an affair with his childhood friend Polixenes, King of Bohemia. As Leontes descends into the dark world of jealousy and paranoia, he obliterates everything that is so dear to his heart. His young son, Mamillius, dies of shock, devastated by the suffering of his mother; the baby girl whom Hermione delivers in captivity is banished from the Sicilian court; and the Queen herself apparently dies of grief, unable to convince Leontes of her innocence.

The events that follow take place in Bohemia 16 years later, shifting the mood from dark tragedy to lighthearted romance as Perdita, the long-lost daughter of King Leontes, who is unaware of her royal lineage, and Prince Florizel, the son of Polixenes, embark on a quest to secure their happiness. The story ends on something of an uplifting note, with reunion, rebirth, and reconciliation; yet with somber emotional overtones lingering to the end.

The Winter’s Tale is a tricky play to stage, for much of the story happens in the ignited imagination of Leontes. Adapting this “problematic” narrative to a dance stage is all the more challenging, for, in addition to a convoluted plot, the action unfolds in two vastly different locales and features a multitude of contrasting personages, plus a perilous sea-crossing, a shipwreck, a murderous bear and a statue which comes to life. It’s to the enormous credit of Wheeldon and his artistic team that the work is realized so beautifully, poignantly, and imaginatively as it is.

With this ballet, Wheeldon emerges as a master-storyteller. His choreography – a fusion of classical and contemporary ballet idioms with elements of folk dance – is clear, fluent and memorable throughout. In this adaptation, the plot is simplified to focus on six main personages: Leontes, Hermione, Polixenes, Perdita, Florizel and Paulina; all of them Wheeldon delineates with the masterful touch of a first-rate dramaturge.

A Shakespeare ballet commands top-notch dramatic actors. As it turned out, the National Ballet of Canada has them in spades. I was fortunate to see the first and second casts; both were outstanding.1

King Leontes is a dominating presence in the ballet’s first and third acts. It’s a thrilling dramatic role; and on opening night Piotr Stanczyk delivered a powerful portrayal of the delusional King consumed by a manic suspicion, his twitching body and spiky jumps transmitting the wild outbursts of Leontes’ burning anger and anguish. Hannah Fischer was a lovely and credible Hermione. Her expression of bewilderment and pride in response to Leontes’s accusations of infidelity was utterly moving. In the trial scene of Act I, she was monumentally compelling, rising on point and spinning in a series of high arabesques, as if pleading for mercy and trust. Jillian Vanstone as Perdita and Naoya Ebe as her sweetheart Florizel left no doubt of their characters’ mutual affection; their jolly dancing made sunny Bohemia feel warmer and brighter. With compelling panache, Harrison James brought out the conflicting nature of Polixenes.

But it was the performance of the second cast (on January 20) that left a particularly profound impression and made me see this ballet in an entirely new light.

The eloquent Jurgita Dronina was magnificent as the wrongly-accused Queen. She was ultimately just what Hermione was meant to be: gentle, loving, pure, stoic and merciful – the symbol of poise and virtue which gives this story much of its meaning. Her dancing was impeccably expressive, as was her acting. In the first act, her reaction to her son’s death was devastating to watch. (Warning to parents – this ballet is not a family entertainment.) The towering Evan McKie triumphed as Leontes. The dancer pulled out all the stops, imbuing his role with ample charisma and power. His sudden descent to madness was harrowing; his penitence and remorse heart-rending. Elena Lobsanova was a charming Perdita; and Francesco Gabriele Frola excelled as a devoted Florizel, stealing the spotlight with his prodigious footwork during the harvest festivities in Bohemia. But it was the luminous Svetlana Lunkina, as a confident and passionate Paulina, the Queen’s Lady-in-Waiting, who ultimately claimed the evening with a performance of unparalleled dramatic insight and skill.

This production is aided immeasurably by the marvelous set designs of Bob Crowley, projections by Daniel Brodie and silk effects by Basil Twist. The court of Sicilia evokes a cool, white marbled art gallery, filled with evocative statues and paintings. The pastoral countryside of Bohemia is implied by a fantastic green tree decorated with golden charms and soaked in a warm sun. (The lighting by Natasha Katz is glorious throughout.) The nautical scenes, complete with a violent storm and a ship-chase, are brilliantly envisioned and done. The new score by Joby Talbot is appropriately melodious, even if at times overwhelming with cinematic bombast; and does a good job in propelling the story forward.

There are shortcomings. The opening prologue feels abbreviated and rushed, allowing the audience no time to get acquainted with the main characters. The scenes of Leontes’s madness in Act I could be trimmed. The same goes to the relentless ensemble dancing of Act II, which, no matter how vigorous and exhilarating, after a while felt dull and repetitive. The third act’s scene of restoration of Princess Perdita comes across as hurried; and there is simply no avoiding the fact that in the second act the storytelling comes to a halt and, despite the unrelenting bravura dancing, the action itself slows considerably. But none of these imperfections diminishes the powerful dramatic impact of the production as a whole. This Winter’s Tale is a must-see.

1Due to the severe snowstorm which hit the Washington area all performances from Friday, Jan. 22 to Sunday, Jan. 24 were canceled. 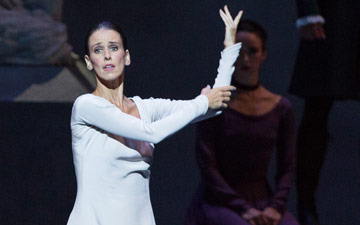