Quests is the second and latest instalment in a dance theatre trilogy called In Situ, choreographed by Trinity Laban graduate Tara D’Arquian. The 90-minute piece is abstract, immersive and site-specific: the audience follows a small cast of unnamed characters, including D’Arquian herself, around Greenwich Dance’s Borough Hall as they navigate a hazy swill of memories, reveries and reality.

The action is arranged around a meta-narrative: the emotional breakdown of the trilogy’s fictitious stage director (Marc Stevenson) as he tries to write its first piece while dealing with the aftermath of his wife’s murder. In keeping with the series at large, which is inspired by Nietzsche’s Three Metamorphoses, Quests concerns itself with questions of consciousness and self, seeking, as the programme notes, to “[raise] awareness about the multiplicity of perception and our relation to existence.” It’s a lofty premise but one D’Arquian manages to explore with little pretension, delivering a work that’s reflective and multifaceted without being grandiose.

Proceedings start in Borough Hall’s Supper Room, a large hall kitted out to resemble a speakeasy, complete with a gin bar open to the audience. For a full half hour before the show, two performers (Bruno Humberto and Typhaine Delaup) remain frozen in a half-embrace in the centre of the room while viewers arrive – an impressive exercise in stillness with echoes of Marina Abramović’s durational art. At the piece’s formal start, a band fronted by Anne-Gaëlle Thiriot takes to the stage and a flashy light show kicks off, jolting the couple from their trance and heralding the entrance of a crop of banshee-like figures – creepy, crawly creatures clad in oversize masks and witchy dreadlocks.

From here, the banshees usher the audience through a series of elaborately decorated spaces, among them an eerie cloakroom papered with newspaper articles about the murder and a foyer transformed into a grand hotel entrance. Oblique, dreamlike scenes unfold in each, presumably glimpses into the director’s dissipating frame of mind. The only real exposition comes from his pushy producer (Ottillie Parfitt), whose frantic phone calls to the press suggest the piece is behind schedule and that a great deal rides on its reception.

The sequence of rooms is intriguing, though the smaller spaces couldn’t quite accommodate the crowd, meaning the viewers in the back (who included myself at one point) couldn’t always see what was going on. The concept is also let down by its derivative surrealism, a Lynchian appropriation with details suspiciously similar to those of an interactive Twin Peaks gig I attended last year, right down to the sinister doctor character, dead girl imagery and foreboding crimson curtains.

Both of these weaknesses were rectified in the final room, a large upstairs hall misted with fog, bearing a marked-out performance space in the middle – a theatre in the round of sorts. Here we flocked around to watch a succession of imaginative dance fragments play out: a sumptuous, slow-moving whirl between the director and several female characters, an agitated jostle carried out by the banshees, a montage of hand motions presented by a 20-strong ensemble of local volunteers. Neither the choreography nor the technique was particularly remarkable in its own right, but combined with the larger mise en scène – which here included film footage of the director’s late wife interspersed with pictures of stained glass windows, all projected onto a large white shroud (a neat hagiography) – the dancing proved absorbing. The piece ends on a positive note: its final moments see the producer whisk in, talking animatedly about the show’s success, while the band hops on stage to reprise its opening jam.

One of Quests’ biggest strengths is its ability to manage the break from traditional theatre space and keep the audience engaged throughout. Its particulars are ambiguous, but its sentiments – despair, confusion, frustration – are clear-cut and deftly explored. At just 25, D’Arquian has already proved a driven, competent choreographer. I look forward to seeing where her ambition takes her next. 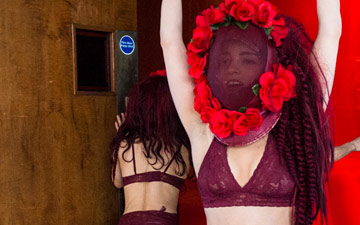 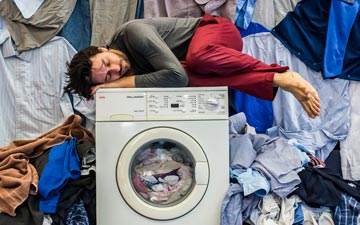