Rocio Molina is nothing less than a chameleon. One minute exquisite flamenco interpreter, the next a puppet, a doll, a Hindu deity, a hoofer, a bone breaker, a hip-swaying woman, a stone statue.

As part of the 2016 Flamenco Festival, Molina performed Danzaora & Vinática, a work which titillates through its sonic scope and Molina’s well-choreographed mood swings. Performing in tandem with palmas and percussionist José Manuel Ramos “El Oruco,” singer José Angel Carmona and guitarist Eduardo Trassierra, Molina takes the audience on a ride of the senses in a semi-abstract world where the only things that matter are sound and movement. In a sequence with lit-up tambourines, Molina creates effervescent shimmers, using her feet and the tambourine equally, revealing sounds you didn’t know existed.

While Molina is a virtuosic technician, she is not your typical flamenco dancer. Some traditionalists have criticised her conceptual, multi-disciplined approach to flamenco, but Molina has earned the right to break the rules as only a master can. She is a national treasure in Spain, where she was honored with the prestigious National Dance Award six years ago, when she was only 26 years old. Among others, she has been praised by Mikhail Baryshnikov, and has taken her inspiration from a diverse array of sources, including Netherlandish painting, hip-hop and Pina Bausch – to whom she was regularly compared for her immersive production Bosque Ardora.

After a quiet, pensive opening, Molina sends ripples of sound out into the audience, and Danzaora & Vinática has begun its extraordinary journey. She arches and curves with a sharpness that sends pains to your lower back. Molina whirls like a dervish and stops cold in her tracks. Her after images burn into your brain. She can transform herself into something of a human mobile, a marionette, bending back in a semi-circle as if suspended from her waist, the body bouncing with the slightest spring. She frequently captures the uncanny, both in stillness and in motion, her face often, though certainly not always, masklike during the more pensive moments.

In Danzaora & Vinática Molina’s movements do not operate in a vacuum, they carve negative space so clearly the positive and negatives are gifts to the audience, a moving sculpture studio. Her stillness and posture echoes temple dancers from the East, a low squat Martha Graham, and she boasts a deftness for sharp, hip-hop grooves, akin to though not as extreme as bone breaking. She weaves these elements in and out of the hour plus production without anything seeming choppy or out of place. Molina is a shape shifter, a fact made more obvious through Danzaora & Vinática’s near bare stage and effective minimalism. And in a sequence with lit-up tambourines, Molina creates effervescent shimmers, using her feet and the tambourine equally, revealing sounds you didn’t know existed.

For all her cool factor, the quintessential passion inherent in flamenco is no less present in Molina’s hands. She conjures a flurry of taps around a half full wine glass and smashes it with her foot. The glass stays on stage, and she taps on it later, the mic picking up its grainy crunchiness. Her performance is taut enough to make your teeth clench. Flamenco relies on extraordinary expositions of technique and bravura – showing effort is part of flamenco’s intensity but for all the blood sweat and tears, there must be the contrast of nonchalance, as if one can do it in one’s sleep, a duality which permeates Danzaora & Vinática.

Her partnering musicians were exceptional, with the complex mystery of flamenco’s Andalusian origins heavily prevalent in Carmona’s voice, whose timbre and vibrato frequently recalled classical Arabic music. Molina and “El Oruco” have a rhythm battle towards the end of the show in a tense, feisty, hypnotic exchange of percussive language. As a production Danzaora & Vinática is spacious and minimalist, there are many pauses and silences between episodes, but the end result is no less intense than a legion of flamenco dancers charging towards you. Molina and her musicians capture flamenco’s traditional spirit and show its future capabilities in a crystal clear distillation. 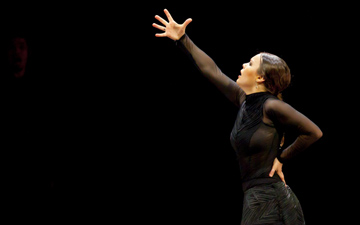 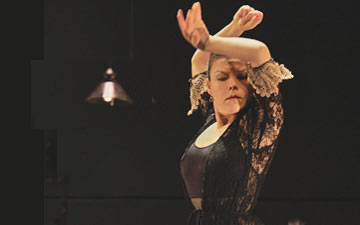 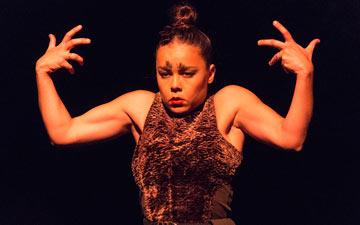