As the first week of American Ballet Theatre’s spring season continues, new casts of Frederick Ashton’s Sylvia come and go. On May 13, the day after a performance in which Gillian Murphy (who was injured) was replaced by three different dancers – one in each act – it was Maria Kochetkova and Herman Cornejo’s turn. Kochetkova was dancing the role for the first time. This is also her first season as a member of the company; she has visited a few times as a guest and was hired last year, in part because she is the right size to be paired with Herman Cornejo. ABT shares her with San Francisco Ballet, where she is also a principal.

Cornejo and Kochetkova, though well-matched in stature, don’t necessarily have much by way of chemistry, at least not yet. The difference is temperamental – his stage persona is warm and engaging, hers is self-sufficient and determined – but also stylistic. He dances in sustained phrases and turns transitions into moments of beauty and suspense. She tends to show the ends of things, going from one high point to the next. She’s a pint-sized powerhouse; he makes music and meaning through movement.

Of the three dancers I’ve seen in the role of Aminta so far, he was the only one to execute the opening phrase – low, slow arabesque turn into arabesque penchée – in a way that made it look seamless, like breathing. Even more, it felt like an extension of the flute melody and of Aminta’s psyche: simple and pure. He also played with the dynamics of the port de bras, giving it a sense of push and pull. His solo in the last act, full of arrow-shaped jumps and cabrioles, front and back, was beautifully danced, but what I remember best is a pause in attitude and a particular flick of the arms at the end. He leaves you with stage pictures. He is probably the most musically exciting dancer in the company, and the one who dances with the most fervor. His only weakness, a not insignificant one, is his partnering; a few of the partnered turns in the climactic pas de deux did not go as planned. There is a particularly difficult one that happens twice, in which Aminta has to catch Sylvia mid-turn; the first time was touch and go, and the second, she came off pointe.

Despite her obvious bravura, Kochetkova’s characterization of Sylvia felt rather flat; she hasn’t absorbed Ashton’s soft, lyrical and highly-coordinated style. This was most noticeable in her arms, which lacked the sculptural quality and clear transitions that can make Ashton’s choreography look so three-dimensional and full. At times, instead of letting a pose relax and radiate, she rushed on to the next thing. Her best dancing came in the second act, in which Sylvia tricks her captor by pretending to seduce him. Her slinky exotic number was stylish and witty and the tricky lift that morphs into an upside-down dive was spectacular. Actually, Kochetkova and Daniil Simkin – the bad guy, with whom she dances in this act – looked good together. Both are clean, highly technical dancers; they might make an interesting match.

It was Cornejo’s night, but there were other highs and lows. The ensembles looked a bit messy – the nymphs’ fouettée turns in Act I, for example, were visibly out of sync. But there were high points too. Gabe Stone Shayer and Patrick Frenette were a good pair in the “slave” duet in the second act, their timing perfect. (And their tambourine-playing was right on the music! This happens less often than you might think.) Christine Shevchenko was a fierce, fiery Diana, legs shooting in all directions as she scolded Sylvia for committing the sin of falling in love. That short scene, in which the goddess remembers her infatuation with the young shepherd Endymion, is one of Ashton’s little coups. The dancer onstage echoes the movements being performed above her in a flash-back, as if experiencing the memory all over again. It is pure poetry.

Sylvia runs through May 15. 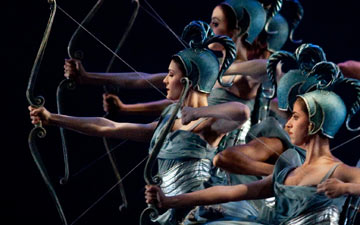 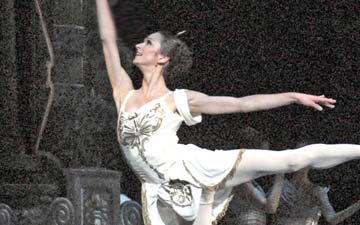 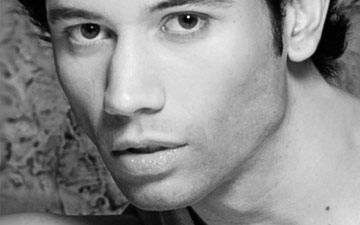