Alongside her work as a dancer and choreographer, Eliceche is a political activist and a student of critical theory, both of which influence her approach to dance. An interest in community and co-existence forms the basis for Unison, which explores the titular concept in terms of shared space and common effort rather than its traditional definition as simultaneous, synchronised action. (As Eliceche revealed when I interviewed her ahead of this show: “We never actually dance in unison! Well, we’re never simply facing the front doing the same thing at the same time. It’s a constructed form of unison using perpendicular and counter directions. It’s about us being together as a group.”)

It’s a rich combination of genres, particularly in the ‘weaving’ section, which fuses classical chassés and pliés with traces of Cunningham technique like quick pivots and frequent changes of direction. Here the dancers appeared more in dialogue than at any other point – crucial, given the demanding geometry of the various arrangements, positions and tempos. A so-called ‘leak’ into the audience – an improvisational section in which the performers danced amid us – also proved a strong point, particularly when an empty chair became a temporary plinth for a precarious, exquisitely sculpted two-dancer pose.

I was less enamoured with the improvisational floor-surfing, which was stilted and produced more awkward positions than compelling ones. And I wasn’t fully convinced by the work’s theoretical angle. Unison considers many worthy points, including the notion that unison choreography can subconsciously inspire competition among dancers (as audiences tend to perceive individual deviations as failures of sorts), but most of the piece’s messaging isn’t readily apparent in its presentation. Rather, it’s fed to us through a long, dense accompanying text that declares Eliceche’s intentions and explains in great detail the many ways the work achieves them. I’m all for signposting in abstract dance, but programme notes should be supplementary, not required reading, even in productions that, like this one, are designed more as academic exercises than visual spectacles.

My ultimate takeaway? Unison is brimming with interesting ideas, both conceptual and choreographic. The latter need to better articulate the former, though. 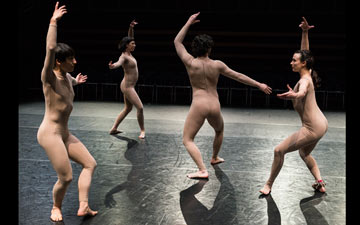 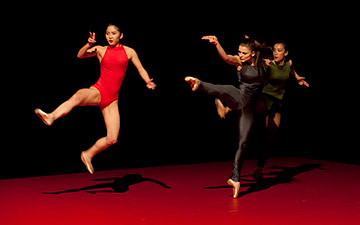