Summer has arrived at Lincoln Center. Temperatures on the plaza hover near 90 degrees, and the ice cream trucks are out. Meanwhile, at both the Met and the Koch, midsummer tales are unfolding. At ABT, Frederick Ashton’s La Fille Mal Gardée plays through May 31. Across the way, at New York City Ballet, George Balanchine’s magical Midsummer Night’s Dream, a ballet that ends with a flock of fireflies flickering in the woods, closes the season.

Those fireflies are kids from the School of American Ballet. Midsummer is full of them. They are the first dancers on the stage, and the last, running and running on their slender legs, arms flapping energetically as they execute perfect little jumps and spins. As Edwin Denby wrote in 1963: “Their steps [are] clean, their music cues prompt, they glisten with responsibility.” They are also adorable, in their little bug costumes by Karinska, sporting tiny wings and antennae. They remind us of the discipline of ballet, the endless repetition of steps, but also of the strength and freedom that such rigor produces. Balanchine harnessed their energy and talent and spread it like fairy dust over his ballet.

But the kids are just one element of what makes Midsummer tick. Another is the intelligence and efficiency with which the ballet tells its story. In the first act, Balanchine weaves together several plots. The action passes fluidly from one to the other and back again. To do this, he uses cinematic tricks like dissolves, shot and countershot, flashbacks. And yet everything is perfectly clear. Here are just a few of the strands: first, the quarrel between the fairy king Oberon and his queen Titania, over the services of a tiny page. Then two intertwined human love stories, that of Helena and Demetrius (unhappy lovers) and that of Hermia and Lysander (happy, at least at first). And the interspecies love affair between Titania and Bottom, a commoner whom the mischievous Puck has turned into an ass.

In this act, danced storytelling alternates with pure dance. Titania dances a pretty, if somewhat generic, pas de deux with an unnamed cavalier and a more poignant one with Bottom, the man wearing an ass’s head. (She and Oberon never dance together.) Oberon performs a thrilling scherzo, full of fast, flying leaps and silvery beaten steps. Hippolyta, Queen of the Amazons, who shows up near the end of the act, whips up some fouettée turns after rocketing through clouds of fog. And then there’s Puck, always flitting about.

On May 29th, the cast was particularly strong. Miriam Miller, a nineteen-year old in the corps de ballet, has the main prerequisites for Titania (a role most closely associated with Suzanne Farrell), namely Botticellian loveliness, poetry of movement, length of limb. The line of her leg in arabesque is beautiful, like a ray of light. Her port de bras is expansive and soft. She radiates warmth and benevolence. When she tickled Bottom’s chin and brought him grass to nibble on, the moment was loveliness itself. Her pas de deux with Silas Farley (the nameless cavalier) was a tad wobbly, but with experience she will acquire more strength and authority.

Anthony Huxley is a perfect Oberon, in part because he looks like a princeling, proud of carriage, reticent, slightly elfin. His dancing suits the choreography: clean footwork, calm upper body, a jump that travels far while never sacrificing finesse. The scherzo is a killer; Huxley made it look easy. As his sidekick Puck, Harrison Ball (who débuted earlier in the week) underplayed the antic, cutesy side of the role and went, instead, for a kind of creaturely exoticism, a choice that makes the character infinitely more interesting.

After the speed and efficiency of the first act, the second, a plot-less wedding divertissement for the two couples and Theseus, the Duke of Athens, always feels rather stiffly formal. (In case you haven’t read the play in a while, the story is set in Ancient Greece.) The steps are boilerplate Balanchine: lots and lots of piqués and sautés in arabesque, all contained within a precise musical structure. The music here is a combination of various Mendelssohn overtures, plus his very Mozartean 9th string symphony. Under the baton of Andrew Litton, the orchestra played with a beautifully unified tone and a strong sense of contrast. The Musica Sacra chorus sang well. It was a great musical evening. The costumes in this act, enormous cream-colored tutus with a rose-colored layer underneath, are gorgeous.

In this midst of all this prettiness lies a pas de deux of startling transparency. A man and a woman travel across the stage with excruciating slowness, executing the choreographic equivalent of a melody sustained on a single breath. He partners her with the lightest of touches as she turns slowly, lowering and raising one leg; or he lifts her so that she travels – or rather floats – backward through space. At one point, they glide in a diagonal, their arms gently pushing one against the other as if to propel each other forward. Every image adds up to the same idea: eternity, balance, trust. Violette Verdy, for whom the pas de deux was made, once said of it: “in a way, they are there to show how good a marriage can be. They represent the respect and platonic relationship between a man and a woman.”

Needless to say it takes great control to pull this off without looking strained or wobbly or letting the line of the phrase peter out. Abi Stafford and Jared Angle danced it well but not transcendently; there were moments when they seemed to will themselves to keep the melody going. Earlier in the week, Tiler Peck and Tyler Angle had given a performance that left the audience breathless. One step melted into the next as Peck’s body yielded completely to the music. The final moment, in which Angle slowly tipped her forward on pointe, only to catch her as she began her free-fall, was vertigo-producing.

Moments like that stay in our memory for a long time. Midsummer’s final image does too: Puck singing out the final notes of Mendelssohn’s score as he rises through the air above the fireflies. 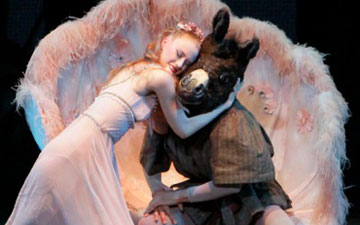 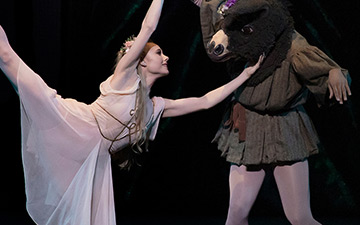 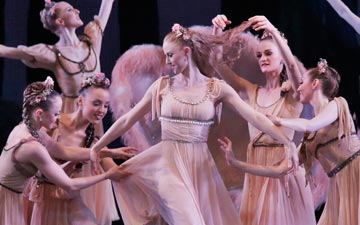