Each spring, the School of American Ballet, New York City Ballet’s breeding-ground, holds a series of “Workshop” performances to show off the crème de la crème of its upper-level students. Despite the name, there is nothing rough-hewn or improvised about these performances. (They were introduced in 1965 by the ballerina Alexandra Danilova, who had joined the faculty the year before.) Quite the opposite: they are lovingly prepared and carefully rehearsed, the ballets scrupulously staged by longtime faculty-members like Susan Pilarre and Suki Schorer. There is always an orchestra, too. It is often said that one can see more meticulous versions of Balanchine here than in the theatre across the way. After all, this is the students’ big day – for them, everything is on the line.

Almost every year, there is something by Balanchine. Over the weekend, the students performed two of his works – Danses Concertantes and The Four Temperaments – and Peter Martins’ charming Les Gentilhommes, a tribute to the much-loved teacher Stanley Williams. It’s interesting to see the shadings that young dancers bring to these works. Danses Concertantes, a jaunty, commedia dell-arte-tinged suite set to Stravinsky’s eponymous score – with rococo designs by Eugene Berman – can appear over-cheerful when performed by the company but feels just right here. The dancers’ ebullience is more natural, less forced. On the other hand, The Four Temperaments – a more stylish, more sober work – loses some of its resonance. Les Gentilhommes, of course, fits these dancers like a glove. It was created for students in 1987 as a kind of technical demonstration, a lesson in musicality, good manners, and stage presence for nine men. The orchestra was led by David LaMarche, conductor and musical administrator at American Ballet Theatre. His interpretation of the two Händel concerti that make up the score of Les Gentilhommes was especially lovely, stately but never stiff, with a dancey lilt.

All three works made a fine impression. Danses Concertantes, led by Emma Von Enck (sister of Claire, a member of NYCB’s corps) and Thomas Davidoff, was danced with a light, youthful energy. Originally created in 1944 and re-choreographed in 1972, it has a similar feel to the Rubies section of Jewels, though it lacks the attack and focus of that ballet. An energetic introduction is followed by a sequence of trios, each composed of two women and one man. Each explores a theme, inspired by the astringent, syncopated music to which it is set. There is a playful interplay between the dancers: little canons and fugues or a simple counterpoint of two against one. The first trio (dressed in blue) includes a saucy hip bump; the third (purple) ends with an image like a see-saw, in which one woman bends forward, then the other, then the first again. There is quite a bit of tricky partnering, with a lot of running back and forth between partners; almost all of it came off without a hitch. New York City Ballet could use some solid partners, so this is a good thing.

The principal man in Les Gentilhommes was Ethan Fuller, whose mature, serious stage presence gave the piece just the right touch of gravitas. Most of the ballet is built out of beautiful, clean classical steps and shifts of weight, with an emphasis on the tilt of the shoulders, the angle of the torso, the use of the eyes, the gracefulness of the arms. One entire section is dedicated to light, buoyant cabrioles, executed in a circle; one young man, then another, takes his turn at the front of the stage. The limpid quality of Adrián Pastén’s dancing, in particular, stood out here. There seem to be a lot of promising young men rising up through the school, and it is among their ranks that one sees greater racial diversity, though not enough.

Fuller also led the “Melancholic” section of Balanchine’s The Four Temperaments, set to Hindemith, and conceived as an illustration of the medieval pseudoscientific theory of the “four humors.” In “Melancholic,” the lone male droops and falls, as if dragged down by an enormous weight. Suppleness, especially in the spine, is essential, and Fuller’s back has all the requisite heaviness and bend. Kennard Henson, in “Phlegmatic,” was even more impressive; in addition to having an astounding extension (as high as the women), Henson has already set his stamp on the role, playing subtly with the rhythm, adding jazzy inflections, stylishly emphasizing Balanchine’s Art Deco shapes. Henson is clearly one to watch.

What stood out most in The Four T’s, though, was the way the details of the choreography gleamed, as if newly minted. These SAB performances are a tribute to the teachers who prepare them, in this case Susan Pilarre (Danses Concertantes), Suki Schorer (The Four Temperaments), and Arch Higgins (Les Gentilhommes). The future is in good hands. 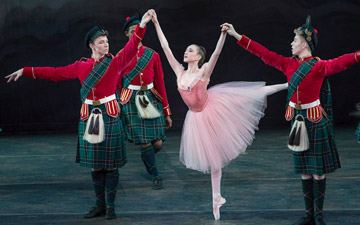