A year ago, American Ballet Theatre performed its new “Sleeping Beauty” for the first time. The production, staged by Alexei Ratmansky, is based on period documents: prints, notations, written descriptions, photos. Ratmansky taught himself to decipher Stepanov Notation, a late-nineteenth-century recording system that soon fell into disuse. The notations revealed nuances in Petipa’s choreography and mime that had been obscured by layers of alterations and adjustments for personal taste, for expanded technique, and for a million other reasons. It was a big undertaking, one that ultimately involved exploring a new way of moving and thinking about the characters and the story. It also refreshed the steps’ connection to Tchaikovsky’s sometimes grand, often witty, always sparkling score.

It was difficult at the time for the dancers to adjust to the lower leg positions, the softer upper bodies, the elongated poses and quicker tempi. Most of all, they had to imagine a new way of coordinating the body that included a more shaded and varied use of the eyes, shoulders and head. The steps are complex, un-streamlined. As Ratmansky said last year: “ It gives so much more freedom to the body because your back is more relaxed, not tense to support the straight line.” But freedom takes some getting used to.

Despite the newness of the style, it was clear already that these efforts had subtly transformed the ballet, awakening certain lost sensations and emotions. The scale of the ballet changed – from grand and grandiloquent to intimate and warm. Its fairy-tale feel had been restored. The story became more important than the individual dances. All the parts were integrated into a harmonious whole.

The return of Sleeping Beauty this season consolidates this impression. This is a production that lives and breathes, and which rewards multiple viewings, changing subtly with each cast. More than anything, it’s a gift to the company, offering multiple roles for up-and-coming dancers to cut their teeth on, colorful mime roles for the company’s excellent dancer-actors, and moments in in which dozens of company-members converge onstage like a giant family. Now that the style has settled, both the dancers and the ballet have grown, together.

It’s been impressive to see a succession of dancers take on the role of Aurora; each of the three I caught this week found her own nuance of tone, and each was enhanced by the production’s softer, more lilting style. Isabella Boylston, on June 27, danced the role with a buoyant joy and un-mannered sweetness. She sprung lightly from leg to leg, but also rested, tenderly, on her prince’s chest, as if instinctually trusting in his goodness. Her arms were particularly lovely in the Vision Scene, as she called out to Prince Désiré (Joseph Gorak) to come to her and release her from Carabosse’s spell. Gorak’s partnering was tentative at the start of their pas de deux, but smoothed out in time for the famous fish dives, which he supported with both hands (rather than one), but securely. His pristine technique and elegant line are ideal for the devilishly quick, complex beaten steps that make up the prince’s solo.

Then came the débuts. At the matinée on June 29, Cassandra Trenary, a promising twenty-two-year-old promoted just last year to soloist, danced the role in New York for the first time. (She had performed it once before, in Detroit.) Her Aurora was sprightly, sharp, energetic, vividly musical, youthful. She nailed the balances in the Rose Adagio while engaging happily with everyone onstage, using her big, sparkling eyes to maximum effect. (It was a nice touch, in the Rose Adagio, to see that the fourth suitor, the one she approached last, was her husband, Gray Davis.) If she evolved less from young princess to loving bride, that’s no sin. Her interpretation will deepen over time. The most lasting image of her Aurora was the pinprick quality of her pointes and the smiling curve of her eyes. Her partner, James Whiteside, though not as refined in his quick footwork as some of the other princes, provided stalwart support, catching her in the fish dives with one hand, as if such a trick were nothing at all.

The evening of the 30th was both a début for Stella Abrera, a company stalwart elevated to principal last year, and an anniversary party marking Abrera’s twentieth season with the company. (She is also the company’s first Filipino-American principal.) Abrera’s assumption of her new rank has been both natural and, in a way, astonishing. After spending almost fourteen years in the trenches as a soloist, she has stepped into one leading role after another with little fanfare, as if she had been born dancing them.

Abrera’s début was the same: calm, lyrical, warm and womanly. She also showed the clearest evolution from the beginning of the ballet to the end. She radiated a kind of repose, with time to linger with the other characters onstage. Her relationship with the king was especially touching. It was in this performance that I realized for the first time that Aurora’s stance in the Vision Scene – with her palms touching, next to her cheek – is meant to allude to the fact that she is asleep in a castle far, far away. A testament to her clarity.

Abrera’s dancing had a singing quality – this less modern style suits her. Her rapport with her prince, Marcelo Gomes, was gracious, even tender. He was, as always, the picture of gallantry. And he has the best smile in the biz. (On alternating nights, he has been gleefully taking on the role of the evil fairy Carabosse.) Before the closing tableau, Abrera lingered for an extra beat with her head on his chest, as if loth to let go. Who could blame her.

In short, this is a production that brings out the best in each dancer, down the line. The majordomos (Alexei Agoudine and Keith Roberts) are funny, fussy, and officious. The kings (Clinton Luckett and Roman Zhurbin) are benevolent and kind. Their behavior underscores the goodness that characterizes Aurora’s kingdom, particularly in contrast with the casual cruelty exhibited by the members of Prince Désiré’s court. The two Lilac Fairies I saw (Veronika Part and Devon Teuscher) were impressive and grand, Teuscher more commanding, Part more lush and generous, particularly in the way she uses her back and shoulders. Gemma Bond distinguished herself in the role of the “Breadcrumb” Fairy, stepping securely in a backward-moving diagonal on pointe, each step illuminating the music. Catherine Hurlin, a very young member of the corps, was delightfully zany as both the Fairy of Temperament (the pointing fairy) and the White Cat in the third-act divertissement. Gabe Stone Shayer and Zhiyao Zhang seemed to hover in the air, effortlessly, as the Bluebird. Shayer added extra complications to his jumps – one assumes with Ratmansky’s blessing. Watching Skylar Brandt dance Princess Florine and the Diamond Fairy on different nights one could not help but reflect: she’ll make an excellent Aurora one day. And the list goes on.

There are too many details to savor, so I’ll mention only two: a small lift that occurs throughout the ballet, in which the woman bends her knees and crosses her ankles in the air, so simple, and yet so delicate and lovely. Why has it fallen into disuse? And the fairy’s attitudes – one leg lifted and bent – in the prologue; the position is held for a moment while looking down, shoulders and head tilted down toward the leg. A complex, beautiful position, full of oppositions and curves. It is an apt metaphor for the entire production, in which nothing is taken for granted and everything has a little extra twist. 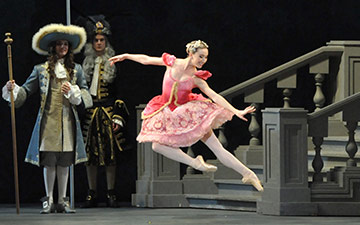