There is a saying in the film industry that you’re only as good as your last movie. Luckily, choreographer Ohad Naharin is better than his Last Work.

SF Performances has brought Batsheva half a dozen times, most recently in 2014, when Batsheva toured the thrilling Sadeh21. Like Sadeh21, Last Work showcases the vocabulary that defines much of Naharin’s choreography: hypermobile body positions, hunched and torqued postures, repetitive and spastic micro-motions, ultra-wide second-position pliés that serve as gateways to shifts in direction, implicit and explicit eroticism.

Those building blocks are all present in Last Work, choreographed in 2015, but there is no dynamic tension linking them together, no apparent hierarchy to give them relative importance. The piece opens with individual dancers performing mostly as isolated units, then segues into a deadly-dull and overlong full-company adagio, and finally explodes into chaos without context.

The dancers are Last Work’s saving grace; their emotional freedom and physical control are truly spectacular. Who else on Earth can throw themselves into a sudden backbend and freeze in midair, then fall into a boneless heap? Few dancers would writhe and thrust and tremble so convincingly, or so often, and then whip off a little tango (another familiar motif). And William Barry’s extensions are over the Moon. In the contemporary genre, these dancers’ expressive abilities are unsurpassed, and they are the premier practitioners of Naharin’s Gaga movement language, which privileges raw self-revelation above all else.

In the 2015 documentary Mr. Gaga, Naharin says that Last Work was not intended as his final creation, but that given the fragile state of politics specifically and human life in general, there’s no way to know that it won’t be. That awareness of life’s ephemerality, and the trauma of many personal losses, runs through Naharin’s oeuvre; it’s perceptible in Last Work, too, when the dancers collapse in mangled positions on the floor, like corpses on a battlefield, and more obviously when a dancer menacingly polishes a machine gun.

But these motifs are stock phrases in Naharin’s choreographic language. Without a through-line to give them meaning, even simply a cohesive construction for its own sake, they read as gimmicks meant to dazzle and distract. It doesn’t help that Grischa Lichtenberger’s electronic sound score is limited to a plodding two-note phrase that repeats for the bulk of the one-hour piece, barely buoyed by the application of melodic samples.

The central section is set on that thrumming two-note phrase, with the men dressed in black monk’s robes and the women in white camisoles and boxer shorts. It has so little momentum that one’s attention simply falls off the back of it. The dancers’ perfect unison in duets and trios, and their eye-popping one-footed demi-pointe balances, had the cold-molasses precision of Butoh, but none of its urgency.

Last Work’s score devolves into house music cacophony by the end, paralleled by anarchic ensemble choreography, a confetti explosion and one dancer taming the rest with hundreds of feet of packing tape. Artistic anarchy can be exhilarating – and no one unfurls packing tape like a Batsheva dancer – but the effect was more random than purposeful.

Throughout Last Work, Rani Lebzelter ran on a treadmill in a long blue dress, and in silent moments her steady stride created a thwap thwap beat. Her aerobic capacity is admirable, but she ended exactly where she started. Perhaps that was the point. 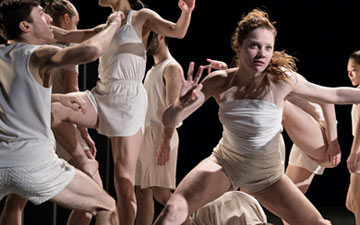