The Art of Fugue by ZviDance = Bach Cubed

When Zvi Gotheiner and his company ZviDance decide to make a new work, one must take note. And so I did, back in June of 2021, when Montclair University’s Peak Performances released the virtual premiere of ZviDance’s latest piece – The Art of Fugue. I was awestruck from that first online viewing and now even more so after reflecting on the live performance presented last weekend at New York Live Arts.

In music, a fugue is a contrapuntal, multi-voiced composition in which a short melodic theme is introduced by one voice and successively taken up by others and reconfigured – all while being interwoven in various relationships. One could call it a scheme for organizing ideas around a subject to enable a larger, more complex, interrelated expression. Fugal form can also serve as a metaphor for a non-hierarchical, collaborative social model.

The incomparable music of Johann Sebastian Bach has perpetually held an intimidating yet inspiring pull for dancemakers. It comes as no surprise that Zvi Gotheiner, founder and artistic director of ZviDance, who was originally trained as a classical violinist, had a long-brewing relationship with Bach’s composition The Art of Fugue. However, the nature of this relationship was more profound than I could have imagined. Gotheiner shared in a recent Zoom interview that as a high school musician, he was a member of a string quartet. He recounted, “We began every session by playing this fugue as a preliminary exercise. In the fugue’s polyphonic structure, each voice is independent; no voice submits to another. So you are part of a tapestry of independent voices that come together to create harmony.” Their teacher assigned this piece of music as an opening practice to ignite the social pathway for harmonious collaboration.

Gotheiner initiated work on the dance piece almost two years ago in January 2020 as a personal, yet collaborative, response to the political and social discord and anxiety of our time. For this choreographic exploration, he used Bach’s The Art of Fugue as a roadmap for the dance and for the collaborative model for its making. The result is a bombshell of a creation.

Gotheiner, who is originally from Israel and was an early member of the Batsheva Dance Company, came to the U.S. in 1978 and eventually formed his company – ZviDance. He has always drawn together a group of exciting performers with unique, individual qualities undergirded by unflappable technique. The current company, with its many new faces, continues in that notable tradition.

The 55-minute work opens with two dancers sitting on metal folding chairs casually clapping and humming a short phrase – the exposition, or main subject of the fugue. The costumes, designed by Gabrielle Grywalski, could be construed as enhanced rehearsal attire, and give a sense that we are viewing a process of making a work. This is further borne out as company member and associate artistic director Doron Perk dances as if he is extemporizing a movement sequence to the clapped phrase. The rest of the eight dancers of the company enter and sit on their folding chairs clapping the rhythm together. They watch Perk with interested attention and at times dance a phrase while seated or leap off their chairs to dance in space and possibly with another person before returning to their seats. The energy and complexity develop into full group sequences that divide into interweaving themes and counterthemes. The full-bodied movements are interspersed with bouts of quirky, punchy traveling steps that move through space creating varied and interesting floor patterns. This is all performed to the sound of group members rhythmically clapping for each other. The dance movement, although clearly a physical and visual articulation of musical components, also communicates a human narrative – that of collaborating as a community in a creative endeavor.

Bach’s music, The Art of Fugue, is then introduced with four dancers, who dance the voices of the fugue with the fully realized movements previously mapped out to the clapped rhythm. The marriage of the movement and Bach’s music is satisfying in its beauty and interesting in its unpredictability.

The third section brings in Gotheiner’s longtime technology collaborators, who develop Bach’s theme with their own creative capabilities. Scott Killian’s original electronic score filled with echoing chords and notes evokes mystery and wonder as does John Higgason’s spectacular live and pre-recorded video design projected onto the backdrop. The initial projection appears to be a doughnut shaped dense agglomeration of tiny dots of white light. The shape begins to expand very slowly and eventually encompasses the entire backdrop. This changing environment provides new stimuli for movement invention brought to bear in a sensitive and sensuous solo danced by Nat Wilson. His body seems to stretch beyond its limits as he tries to grasp the vastness of the changing universe that he is a part of.

Bach returns as Matilda Mackey dances a solo with her own projected image multiplied many times in a diagonal formation behind her. The movement of each projected image is delayed by an exact calculation from the image before it to create a giant visual canon. Mackey performs the solo with her many selves moving from one wave of action to another. This amazing vision is soon amplified by the entrance of Doron Perk and his diagonal of projected selves crisscrossing Mackey’s projections – just as the musical voices do. In this moment Bach is experienced in three dimensions – the aural experience of the music, the kinesthetic experience of human bodies dancing the structure of the music, and the visual spectacle of the mathematical relationships between those musical sounds, or vibrations, enabled by digital technology. Bach is cubed!

One of the most captivating sections of the piece is a solo, in which veteran dancer Alison Clancy dances on a dark stage with a projection of her image caught in a cosmic web of threads of light. Clancy performs the same movements in space as her entangled image in the projection. Gotheiner explained to me that although the video design is pre-calculated, Higgason’s camera is constantly capturing and responding to the dancers’ live action in real time – then projecting it onto the backdrop. So, in fact, Clancy’s dancing body is projected into the web design anew each time she performs the solo. The scene unfolds to Killian’s high-pitched tones suggestive of deep space as Mark London’s celestial lighting illuminates Clancy’s dancing body as if it were lit by the pristine brilliance of faraway stars in the night sky. The spaciousness of Killian’s sound composition and the awe evoking quality of Higgason’s digital designs are a reminder that much of Bach’s work was composed as religious music to arouse a spiritual experience.

We come back to earth with more human encounters resembling a jovial village dance performed again to Bach’s composition. The music seems to erupt from the dancers’ bodies in a natural moving expression of the sound. The dancers then introduce new and complex arrangements of the chairs and movement from the altered furniture configurations. New projections appear displaying more complex arrangements and subdivisions.

Anson Zwingelberg dances a bold recapitulation of the original fugal theme to a dynamic, otherworldly design of expanding and morphing light now filled with vivid colors. (Up until this point the projected images have been in black and white.) Zwingelberg exudes a vibrant intensity with his spiraling arms, leg extensions, and hip swivels closing and opening his body as though it is the source of this amazing light and color.

Petite and electrifying dancer Ching Ching performs a riveting solo with her folding chair. She begins by dancing atop the chair until she descends into a grand plié that brings her down to sit upon it. She runs circles around it, swims through the opening in the back, and seems to get stuck there. Finally, she frees herself and folds it up. Grabbing the chair with one arm, she whirls herself around in repeated spins as the chair floats outward in a display of centrifugal force.

The other dancers arrive with their chairs, which they sit on in a semi-circle surrounding Ching Ching. She moves toward each member of the group and receives some gesture of support or connection. Eventually other dancers rise to dance into the center of the community. In a give-and-take remake of musical chairs, the standing dancer in the center falls outward to a seated dancer and receives the support or resistance necessary to complete their movement. But the periphery continually shifts as the seated dancers keep moving their chairs around to new configurations of the semi-circle. The ever-changing group formation is replicated with a stunning kaleidoscopic image projected behind the dancers. Then quickly the grand design dissolves – the dancers gradually leave (with chairs) one-by-one as the musical voices are reduced – until only one dancer remains. The final musical voice comes to a solitary resolution as Ching Ching exits the stage leaving only a large pool of golden light on the ground where altogether they built a dance.

ZviDance’s The Art of Fugue multiplies the beauty and complexity of Bach’s creative genius onto multiple platforms with inspired intelligence and sensitivity. This work raises Bach’s music far beyond its already sky-high pedestal and sends it into new orbits. 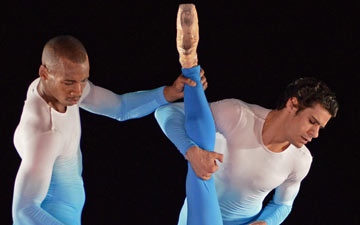 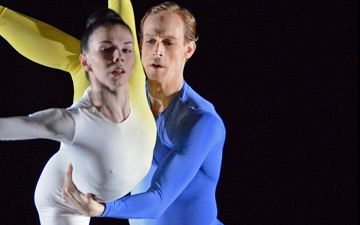 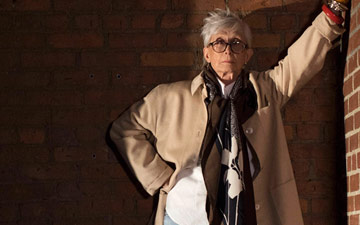