Nafisah Baba is the BBC Young Dancer for 2017.

The 20 year-old contemporary dancer from West London won the award with a diverse trio of dances that grew stronger through the rounds. Named as the winner of the contemporary final, just over a week ago, Baba’s triumph in the grand final came after a close contest with the winners of the other categories: Jodelle Douglas (street); Rhys Antoni Yeomans (ballet) and Shyam Dattani (South Asian); plus John-William Watson, another contestant from the contemporary category final, who received this year’s ‘wild card’ from the judges.

Baba opened with the weakest of her three performances, using her own choreography to Inescapable (with music by Dan the Builder – a cousin of Bob, one supposes – enveloped at either end by the sound of silence). By contrast, her performance with Lois Wong was the strongest of the duets; choreographed by Jodie Blemings to Max Richter’s Infra 8, it included a mellifluously fluid opening solo by Baba that was considerably more absorbing than Inescapable.

The Wayne McGregor influence – from Richter’s music – continued into her final solo, choreographed by former McGregor dancer and assistant, Laila Diallo. Near the place where your feet pass by, was a superb, enigmatic vehicle for Baba to win over both the audience and the judges. The work could have been a self-choreographed solo for Diallo, a Canadian, now resident in Bristol, with its quirky, characterful opening (Baba removing her Dr. Martens boots) and its long-lingering back bends, stretching out to the point of tipping over.

We had seen enough in the first two dances to understand that Baba’s hybrid style, mixing an athletic physique with a range of commercial, jazz and contemporary capabilities, was nothing like the idiosyncratic aesthetic of Diallo’s work; but Baba owned the piece as if she were the maker, dancing her own movement. It was the defining performance, well deserving of the ultimate accolade as BBC Young Dancer for 2017.

It seems that contemporary dancers have the advantage in this contest. Now in just its second iteration, dancers from the contemporary category have earned the ‘wild card’ on both occasions and it has also been a dancer from this category that has progressed to win the overall title. In 2015, it was the youngest dancer, Connor Scott (then, 17) – from Northumberland – who won, having been that year’s ‘wild card’. Now at the Rambert School – and still more than two years’ below the upper age for the 2017 event – Scott returned for a divertissement dance of his own creation that was captivating in its emotional drive and seamless fluidity.

The absence of rigid discipline for the contemporary dancers is the reason for their advantage, especially over the dancers from ballet and kathak. The robust reliance on specific disciplined technique makes even the tiniest blemish more obvious, as well as diminishing the opportunity for self-expression and freedom of movement.

There was also an inbuilt tilt towards contemporary in a judging panel that had a single specialist in three of the disciplines (Kevin O’Hare for ballet, Nahid Siddiqui for kathak and Kate Prince for street) matched collectively by three judges with a contemporary background (Marc Brew, Kenneth Tharp and Jasmin Vardimon). It’s always difficult to create a balance in such panels but this one seemed a bit too contemporary-heavy.

That point aside, I have to say that the tally of my own personal marking of the five contestants over their programmes of three dances (3 x 10 point scores) had the two contemporary performers out in front, with just four marks between first and last in a closely fought contest. I felt that Baba was pushed hardest by the other dancer to have emerged from her category and not the least in John-William Watson’s outstanding solo that opened the show. His If Not Now, Then When?, performed to a vintage song by The Ink Spots contained an impressive array of rhythmic movement, especially in floor-based dance, flavoured by street-style accents of muscle isolation. It was – to my mind – easily the best of the opening round.

Watson’s duet – Pairbound, performed and choreographed with Beth Emmerson – also benefitted from an empathetic musical choice (Nina Simone’s Ne Me Quitte Pas) and was danced in tight harmony; although one questioned whether aspects of the choreography (and Watson’s doleful expression) were not iterative of his opening solo. His closing solo, Gamble, choreographed by Caroline Finn (the artistic director of National Dance Company Wales) was an interesting brief exercise in accentuating Watson’s explosive power with delicate balances and weight transference.

The remaining three dancers showed mastery of their own discipline but in performances that generally lacked that indefinable extra quality. The Street dancer, Jodelle Douglas (21) had been a category finalist in 2015 and went one stage further in this, his final year of eligibility. His three works each tried to tell a story – of confinement, of a journey – with popping and locking that possessed a silky, liquid quality; although both of his solos were book-ended with brief periods that lacked the dynamism of the central section. I thought that his best work came in partnering the 2015 street category winner, Harry Barnes, in a tightly co-ordinated, fascinating dance, which turned the street battle (of which Douglas is a multi-victorious veteran) into a highly collaborative duet.

Rhys Antoni Yeomans (19) – a former Billy Elliot (in the stage musical) – is in his final year at English National Ballet School. He opened with James’ variation from La Sylphide, initially having a false start (unseen on the TV, obviously), which may have led to the solo appearing to be rushed. The Satanella pas de deux (danced with Misato Isogami) also reached back into the nineteenth century for classical choreography. Both these dances suffered from the tinny sound of poorly-amplified recorded music. Yeomans handled the Bournonville style deftly and I was also impressed by the strength of his partnering, notably in the promenade, although this disguised skill is less obvious than the virtuoso tricks. Morgann Runacre-Temple cleverly introduced a freer, more contemporary style to his final solo, choreographed by her to John Adams’ Short Ride in a Fast Machine, but something seemed awry with the timing in the final bars.

Another 19 year-old, Shyam Dattani had breezed through the South Asian category final and his elegance and grace continued in an opening solo, choreographed by Urja Desai Thakore. However, it was disappointing that the only sound I could hear from his ghungroo bells (attached to the lower leg) was as Dattani walked in the darkness to take his opening position. Both here and in the duet (by the same choreographer), danced with Ishira Shah, the over-amplified music obliterated the sounds of feet and bells. The delicacy of the arms and upper body movements were sublime but, although Dattani has a strong and expressive face, he seemed to possess the least potential for diverse movement flexibility than the other contestants. Sonia Sabri did her best to bring out additional qualities in her concluding solo for Dattani – appropriately entitled Unravel – beginning with a pose suggested by a crumpled piece of paper; but despite her best efforts, the control of muscle tone and balance (body flight, if you like) was less evident in achieving the suggestion of floating between steps.

Incidentally, it was in the South Asian category that another kathak dancer, Vidya Patel, first came to prominence, in 2015, going on to garner two nominations for National Dance Awards in the following year for her work with Richard Alston Dance Company, I suspect that several (if not all) of these 2017 finalists will successfully use BBC Young Dancer as a springboard into a professional career. I certainly hope so.

Patel had been the only female finalist, in 2015, just as Baba was, this year. It seems oddly counter-intuitive that 80% of the finalists in the first two iterations of this event have been young men, which is probably in inverse proportion to the gender balance amongst those seeking entry into the vocational schools. Are young men generally stronger at the elite end of the young dancer spectrum? At least, this year, the only female turned the tables for an emphatic win.

All that remains to be said is that this year’s event was most efficiently run with a strong presentational team, all with Strictly Come Dancing credentials. Darcey Bussell occupied the magisterial role of overseeing proceedings and announcing the winner, with her customary professionalism. Countryfile’s Anita Rani – who reached the semi-final of Strictly, in 2015 – carried out the between-rounds interviews (which were only seen on TV, and not heard in the theatre); and this season’s Strictly winner, Ode Oduba, was an excellent host, never lost for words even in the downtime between shots and second takes. 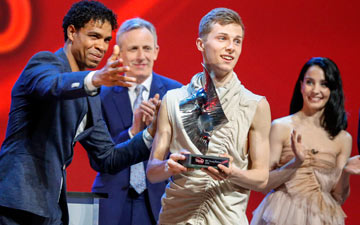 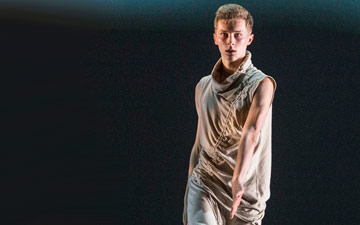