Biały Teatr Tańca (it means White Dance Theatre), is a new vehicle for the work of the uber-talented choreographer, Izadora Weiss, a protégé of the great Jiří Kylián. For several years, Weiss was artistic director and resident choreographer for the Baltic Teatr Tańca (Baltic Dance Theatre), in Gdansk. But, a change of director (and direction) at the Baltic Opera House brought this association to an untimely end, last autumn; and Biały Teatr Tańca is the phoenix that has arisen from those ashes. Weiss has maintained her personal momentum by cleverly retaining ownership of her outstanding repertoire of narrative contemporary ballets, keeping the Baltic logo and associated imagery and the company acronym of BTT (Biały replacing Baltic).

What she has lacked, over the past year, is a permanent base, and the luxury of retaining her dancers on long-term contracts. Biały Teatr Tańca was launched at the Diaghilev Festival in St Petersburg, last November, and currently leads an itinerant existence, from project-to-project. A welcome by-product of this lack of permanence was a commission to produce her first choreography for Polish National Ballet, entitled Darkness, which premiered in June; garnering a nomination for the best choreography for the 2016/17 season in the Polish Dance Awards. Darkness returns for a further run of performances, in Warsaw, this autumn.

Eros Thanatos is therefore the first original work, to be made by Weiss, on her new company; taking advantage of the offer of a weekend at Warsaw’s Teatr Polski, normally exclusively a venue for drama productions but one with a stage well-suited to dance. We may hope that this well-established theatre’s extension to narrative dance theatre might provide the potential for a more permanent home for Weiss’s new adventure.

Her personal attraction to contemporary dancers is clearly undiminished since they came from around the globe to audition for this project (and the chance to make a new work with one of the most exciting choreographers around). The dozen chosen by Weiss came from eight nations, spread over three continents, including two former members of the Gdansk-based company: Beniamin Citkowski (her male lead in Phaedra, the only one of her works, thus far, to make it to the UK); and Daniel Flores Pardo.

Weiss’s work in Gdansk was invariably made in just a single act. Here, in Warsaw, both Darkness and Eros Thanatos have been two-act works, albeit possessing significant changes in pace and style on either side of the interval. In Eros Thanatos, it is almost as if Weiss has made two variations on the same theme. As in her earlier work, Light (based on an imagined back story to Vermeer’s painting of The Milkmaid), Weiss has taken her inspiration from a work of art and its artist; her subject being the revered Polish painter, Jacek Malczewski, and his work entitled Thanatos, which in Greek mythology is effectively the personification of death.

There is a unique style and spectacle to Weiss’s work, which is invariably dark and tragic (a humorous interpretation of A Midsummer Night’s Dream being an exception that proves the rule); often based on mythology and legend (Phaedra, Tristan and Isolde, Darkness) or a Shakespeare play (The Tempest, Romeo & Juliet). Her sets are often – as here – movable panels; she utilises the darkness of upstage areas for many of her entrances and exits and regularly uses groups of dancers in different areas of the stage to tell aspects of her stories, simultaneously. Weiss’s choreography is busy, heavily influenced by classical ballet – replete with arabesques, deep pliés and jetés en tournant – but with her own indelible stamp etched onto each movement, creating a uniquely-styled, neo-classical form, which is instantly recognisable. This “house” style is very closely regulated by Weiss, who choreographs every moment of the dance and closely controls all other elements of her productions, including costumes, lighting, poster and set design.

The particular conceit in this work is to take Malczewski’s best-known painting in the Thanatos series and apply the Freudian concept of the “death drive” – a psychotic propulsion towards self-destruction, as the exact opposite of Eros, the propagator of life, through love and sex. Weiss clearly sees the two as different sides of the same being, hence the omission of “and” in the title, with the suggestion that Eros Thanatos is a proper name.

Another conceit is to cast Eros as a violinist, played by Weiss’s own daughter, Weronika, a remarkably talented young woman currently studying at the Warsaw Conservatoire and destined, I would wager, for a significant career as a concert violinist. The work’s arresting opening has the younger Weiss, starkly illuminated by an overhead spotlight, playing a sentimental theme, copied by memory from an improvisation made by Nigel Kennedy (now a Polish resident) to the inspiration of an old Jewish folk melody. She seems alone until one notices that Eros is being closely observed by a figure, lurking in the darkness, with his back to the audience, at the front right-hand edge of the stage. This – it transpires – is the character of the Painter, played by Adam Grabarczyk, who bears a striking resemblance to Malczewski.

This first act represents a sort of allegorical coming-to-life of the Thanatos painting – perhaps as a reaction to the beauty of Eros’s violin-playing – with the personification of death played by the German dancer, Nadja Simchen, wearing a long, backless, red evening dress and moving in a slinky, erotic, yet strangely dislocated style. A group of five soldiers take to the stage in an ebullient, macho dance before Thanatos (Simchen) relieves them of their rifles. The soldiers are quickly joined by five girls and it is in the ensemble choreography for this corps of ten dancers that Weiss really excels, creating beautiful, organic, ensemble movement from the highly individual actions of each dancer. They move independently, differently, before suddenly coming together in unison and then breakaway into their individual actions, once more. It has a resonance with the highly-praised, emergence-style group movement of Crystal Pite.

In fact, the last 20 minutes of the first act, is as absorbing as anything I have seen in contemporary dance theatre (on a par with Akram Khan’s Giselle, which is the highest praise, possible). It is a long, unbroken dance sequence that combines highly descriptive and beautiful music (Viatore z by the Latvian composer, Pēteris Vasks – a marvellous new “find”, for me) and outstanding clarity in the mix of choreography and narrative: the five women return in identical red dresses to that worn by Thanatos and one-by-one, this multiple personification of death takes each soldier to the “other side”; Simchen walking each one backwards, her hand covering his eyes.

One particular soldier (Citkowski) has fallen in love, mutually, with one of the girls (Naomi Citrini) and the closing sequence of Citkowski being lovingly undressed to wear just a white covering over his genitalia and then held in a strikingly-lit death pose, surrounded by the five women clad in their identical dresses evoked the contrasting imagery of the Pietà and the Brides of Dracula: an extremely effective, if not emotionally-draining end to the act.

The second act is performed to a recording of Karol Szymanowski’s Violin Concerto No 1 (by Konstany Andrzej Kulka), which has a particular resonance since Malczewski and Szymanowski were related through the former’s mother (Maria Korwin-Szymanowska) and the act opens with a family eating on one side of a long dining table, stretched diagonally across the stage. This was the Painter’s family; Grabarczyk being joined by Marta Barossi (as his wife), Citkowski (as their son), Luana Pignato (daughter) and Flores Pardo (as her fiancé). Their “last supper” is interrupted by a plague of mythical creatures (perhaps, renegades from the paintings?), such as the personification of a Faun (Ieva Levina), a Satyr (Wan Lee Hueng) and – surreally – a Moth (Rebecca Wolbeck).

The clarity of narrative is not quite so clear-cut in the second act. The family seems menaced and (unsurprisingly) disorientated by these fantasy characters. The daughter appears to commit suicide but then (immediately) returns to life. We have the feeling that the painter’s family is paying a price (perhaps even, a sacrificial cost) for his obsession with Thanatos.

Whilst Darkness deserved its critical praise and award nomination, as an avid follower of Weiss’ work for several years, it was clear to me that it sat less well on the borrowed dancers from the National Ballet, especially because they were dancing Swan Lake during the same period. It seemed that they needed more time to assimilate the peculiarities of Weiss’ special style. By contrast, the month that Weiss had to work and rehearse her own dancers for this premiere certainly brought the performance back to the same level of familiarity that was enjoyed by her Baltic dancers (and their audience). Citkowski is a charismatic dancer whose movement is redolent of her style and Simchen is a remarkable new find. One also marvelled at the prowess of the Korean dancer, Wan Lee Heung, clearly employing skills from a hip-hop background to power some particularly explosive moves.

Had this work stopped at the interval it would have been a fully-fledged, five-star masterpiece; but the second half didn’t quite live up to the brilliance of the first. Nonetheless, however, Eros Thanatos shows Weiss back to her very best form. 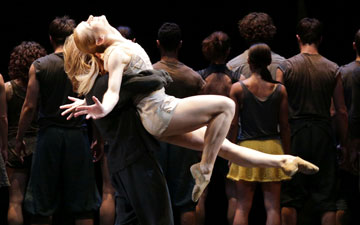 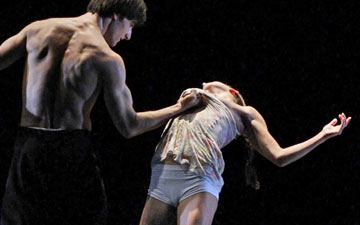 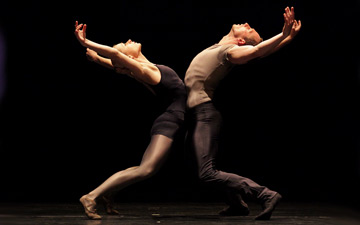 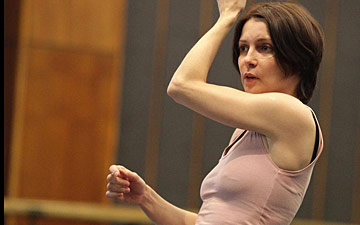