I’m guessing that the risk assessment for this show was significant. The Place was unrecognisable; all seats removed, replaced by a raised square centre stage, like a boxing ring without the ropes, patterned in mix-and-match, black and white chevrons, which concealed several trap doors, some big enough for a piano and performers to emerge or disappear; others, small enough to accommodate tiny dolls. “Dead” things fall from the flies; a murder of murdered crows, a severed arm, sundry small mammals; and a full-sized, highly realistic deer carcass, complete with antlers, also pops up from a trap. Completing a challenging set of paperwork for the risk assessor, there is also a momentary glimpse of a fully-fledged fire emerging from beneath the stage. One wonders if the conflagration was worth it for twenty seconds (the same could be said for the piano’s brief appearance).

The audience is arranged around all sides of the “boxing ring”, heads visible, like four rows of human footlights. Both the standardisation and the visibility are enhanced by the implicit invitation for us all to wear identical conical hats that mimic the monochrome patterns of the stage floor. Most availed the opportunity to dress up, thus becoming part of the performance spectacle; each of us, an additional clown in this surreal blast of macabre humour with outlandish twists.

Audience participation also extended to a version of Russian Roulette, played with lights rather than bullets (thankfully, because my companion took the hit, three times!) with light travelling around the four sides of the stage, suddenly stopping with the spot illuminating a generally giggling member of the public in his or her pointed hat. One man is asked his name and then other chosen ones are invited to give a brief eulogy for the life of this poor guy as we are led to believe that the light represents the randomness of death.

Requardt and Rosenberg were the creative genii behind Electric Hotel, a site-specific outdoors work, which I saw amongst the decommissioned gasworks around King’s Cross, some seven years’ ago. It was as if bringing Hitchcock’s Rear Window to life; each of us having the chance to be James Stewart for the evening: a highly atmospheric, voyeuristic experience, especially enjoyed in light drizzle. Other site-specific works followed and by coming indoors, as it were, co-directors Rosenberg and Requardt have now dispensed with the potential for light drizzle but nonetheless retained their compelling mix of spectacle, dark humour and bizarre excitement.

Critics seem unable to refer to their work without a reference to the filmmaker David Lynch, although DeadClub™ seems to more closely reference Lewis Carroll with the singing/dancing Valentina Fermenti, a sexy Alice with closely-shaved, silvery-blonde hair, wearing a long turquoise dress, white ankle socks and sensible “Alice” shoes. The text is interpreted in sign language. Neil Callaghan appears as if a Christ-like figure, dressed only in a pair of grubby, moth-eaten underpants that have seen better days. It is he that cuddles the lifeless dear, manipulating its semblance of death throes. It is not a scene for the feint-hearted, bringing ghoulish imagery from Snow White to sit alongside Alice´s Adventures in DeadClub™-land.

The choreography is limited, necessarily so by the size of the stage, but nonetheless there are significant dance sequences; their impact maximised by the intimacy of the setting and the fact that the audience is looking up at performers dancing inches away from their heads. More risk assessment headaches, here, I would wager.

The show is punctuated by the tiny models and voiceovers that provide their thoughts. They roll into place in the dark, an effect, occasionally ruined by the timing not quite being in synch at this performance. The relevance between these small, featureless dolls and their neurotic thoughts, the striking stage design, conical hats, Russian Roulette with lights, the adult performers and the dead animal carcasses can only really be guessed at, although it becomes a compelling exercise to try and join the dots.

It is a fascinating show, especially if you can bear to stand in warm surroundings for an hour, which leaves a plethora of after-thoughts to conjure with in succeeding days. But, as is often the case with such surreal dance theatre, it doesn´t end with the profound impact of a killer blow; departing more with a spluttered whimper, leaving behind only the dead deer as a reminder of our mortality. 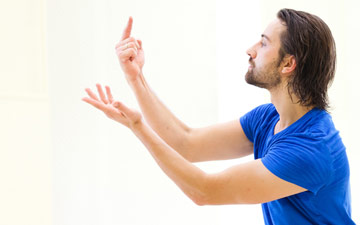