Two chiselled, sculpturally lit male bodies, each “dressed” in barely there flesh-toned thongs, occupy separate spotlights. Slowly, with exaggerated movements and shapes reminiscent of pre-Columbian friezes, one moves across a bridge of light that appears in increments between them. Reaching his destination, he stands within the foetally curled shape of the other man and leans perilously forwards and back.

So begins El cruce sobre el Niágara (The Crossing over Niagara), by the Cuban choreographer Marianela Boán, which imagines the relationship between the 19th-century aerialist Blondin and the man he famously carried on his shoulders as he crossed a tightrope strung over the Niagara Falls. The two men, once committed to this dangerous feat, have to learn to move and think as one, but they must also negotiate the balance of power between them. Boán’s choreography, set to Messiaen, has a mythical grandeur, a ritual sense of display and masculine physicality, a menacing push-pull power-play and slow, astonishingly controlled athletic movement – all of which the Danza Acosta dancers Carlos Luis Blanco and Alejandro Silva achieve with aplomb (a mirrored arabesque in particular is breathtaking).

It’s an impressive start to Debut, the first touring programme of work from Carlos Acosta’s new Cuban dance troupe. The ethos of the company, which has no principal dancers, is about collaboration – and certainly on this showing his 14 dancers are a thrillingly talented, tight-knit group. It’s just a shame that in a very mixed bag of short works, the ensemble pieces aren’t the strongest elements.

Belles-Lettres – a piece by NYCB’s Justin Peck, reworked for Acosta Danza – is a sweepingly pretty pieces for nine dancers, all floaty, gorgeous frocks and increasingly impassioned duets to lush lyricism from César Franck. Four couples twirl and swoon, while one mischief-making loner (Mario Sergio Elías) pops up and causes ripples of disruption. It’s a light, bright, charming modern ballet, and a chance for the dancers to show off some solid classical technique with a slight Cuban twist.

Imponderable, meanwhile – another piece performed by four couples plus one, which suffers from being programmed next to Belles Lettres – is a much less coherent work. We flip from the jauntily folky “nueva trova” of Silvio Rodriguez songs (rearranged by the composer Owen Belton), with suitably folk-inspired movement, to screechy electronica, and dancers wafting about with smoke machines and ineffectually waving torches on a darkened stage. The programme note waffles about it being a reflection on the weight of the soul – given the overtly political nature of Rodriguez’s work and the paranoia-inducing dislocation of the “dark” sections, you can’t help thinking of state oppression and torture. The Spanish choreographer Goyo Montero seems to want to revel in the jarring, disjointed styles, but it’s just rather baffling to watch. There’s a sequence of martial-like, street-dance suffused synchronicity, though, that gives a thrilling sense of the group dynamic – you long for more of this.

Acosta himself takes to the stage for Mermaid – a duet created by Sidi Larbi Cherkaoui, performed with the former Danza Contemporánea de Cuba principal Marta Ortega. To the eerie sounds of ocean-inspired Korean folk music played by Woojae Park, Ortega, gorgeous in a Hussein Chalayan red dress, staggers and swoons, wine glass in hand, as Acosta tries to support her. It’s a masterclass in looking out of control while maintaining a steely rigour of movement – and Acosta, always the most sublime of partners, is a perfect foil. The richness of Larbi’s choreography is revealed as Ortega’s rubbery movements subtly shift from drunken flailing pointe-work to an idea of a creature struggling out of its element – here, then, is the Hans Christian Andersen tale referenced in the title, made touchingly real by Acosta’s despair, compassion and hope. It’s a lovely piece – and the highlight of the evening.

Sad then, that Debut instead ended with Twelve, conceived by Jorge Crecis as an exercise in “dance-sport”. Basically, this involves 12 dancers spending 18 minutes throwing 36 neon-lit plastic bottles between each other. Yes, 18 minutes of people milling about and catching things. Admittedly some of the catching is very impressive – sometimes the dancers set up something akin to juggling between themselves; sometimes the sheer number of bottles hurtling around creates an “ooh” factor. And its jaunty premise of “one for all” precision-tooled teamwork aligns with the Danza Acosta ethos. But in reality, it felt like a rather humdrum circus act – and not really a true reflection of the dance talent that this exciting company clearly possesses. 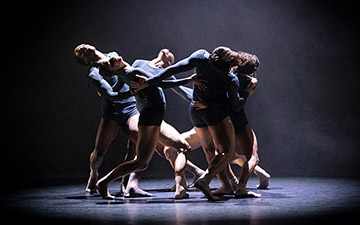