Dance Umbrella opened its 2017 programme this year with a free outside event at Battersea Power Station’s Circus West Village.  Origami is a work for a solo performer and a shipping container which slowly unfolds and reconfigures itself over forty minutes. The construction noise and industrial setting provide a sharply contrasting backdrop to a calm and meditative work which holds the audience’s attention throughout despite all the potential distractions.

Battersea Power Station is a huge building site.  The route to the performance area passes by a series of huge new steel and glass offices and flats, eerily empty as if a fleet of giant spacecraft have just landed. The famous four chimneys of Battersea are surrounded by many cranes, delicately and slowly turning and dipping. There are sounds of drilling, banging and hammering, and of helicopters and planes passing overhead which merge into the soundtrack.  What might have been a distraction embeds itself successfully into the fabric of the work. It doesn’t seem that unlikely a setting to find a 40-foot shipping container.

Origami was created by dancer, choreographer and aerial circus artist Satchie Noro and builder and designer Silvain Ohl.  As the big triangle cut into the container sides begins slowly to shift upwards, we see her inside. She is sensibly dressed for the weather – in several layers of jackets (drizzle was threatening, but mercifully held off). She dangles on a pole or on the wires that manipulate her set in various extraordinary limb stretching ways. She sheds her outermost jacket once she’s warmed up, which sounds quite normal except that she is dangling upside down at the time.

The container itself is in almost constant gentle motion, folding and refolding like the Japanese art of paper construction that it references. This must present quite a challenge to the performer in maintaining poses and balances, but you wouldn’t know it.  Noro is always cool and controlled. She might be braced between the sharp edges of the metal, or hanging by one hand from a cable high up in the air, in a position that must be truly terrifying but she seems serene.  There is no showing off and no grand flourishes.  She’s just completely at home, and even curls up as if asleep. You can’t help but think that all this would give the health and safety authorities a fit of hysteria.

Only towards the end when she is standing on top of the upended section does the enigmatic Noro unleash some force.  She produces a huge axe and swings it around her head before bringing it crashing down on each corner of the box creating a massive booming noise. The soundtrack to Origami is by Fred Costa and incorporates wordless vocals as well as more gritty sounds. Ideally the volume could be a bit louder, as it seems a little too contained and there is plenty of external noise competing with it. In the final section, the container has refolded itself to leave a triangular shaped hole which Noro inhabits.  She stares out at us, balanced on a tiny narrow ledge with hands stuck casually in pockets.

Because so much of the performance is high up in the air, there is no straining and shuffling for a decent view. In any case there is lots of room for those standing to watch. Some keen photographers did dive in and out trying to get different angles on the container against the massive Battersea chimneys, but not distractingly. It’s an event where photographing and texting are positively welcome.

The production is moving on to other sites within London to provide more contrasting backgrounds, including The Queen’s Gardens in Croydon (14 October) and Trinity Buoy Wharf (15 October).  By night the performance might look different again.  This free event is definitely worth dropping in on, if it’s near you, to make you look at a familiar backdrop in a new way. Despite all the tension inherent in such a high risk performance it’s a curiously calming and tranquil experience. 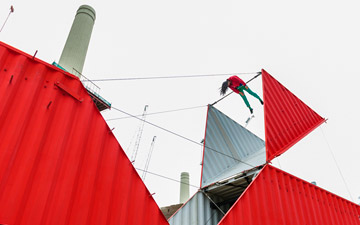