It’s pretty simple really – the Birmingham Royal Ballet (BRB) Nutcracker is the best ‘Nut‘ in the UK – certainly the best of the big productions and that’s been the case since it was first unveiled in 1990. I still remember seeing it that year in Birmingham and, like everybody else, was particularly gobsmacked by the transformation and fight scene that Peter Wright (choreographer and then Director) and John Macfarlane (designer) had conjured. Magical is a word often used but this seemed on another level and in seeing it many times since it has never lost its sense of wonder for me.

Back in 1998 Ismene Brown, in the Telegraph, declared: “Undeniably this is one of British ballet’s masterpieces, and I hope it takes the stage for a hundred years to come.” Apart from wishing I’d written it, that was when the Birmingham Nut first came to London. They were on at the Lyceum and it was a great success – the magic travelled well. Unfortunately the next time London saw the production was at the O2 in 2011 when it was necessarily changed to cope with the ginormous and non-theatrical layout. Without the ‘proper’ frame of looking through a proscenium arch the production made something of a mark but it unquestionably fell short of the dazzle it can deliver. And this winter the production came back in London, this time to the Royal Albert Hall (RAH) – an atmospheric space but again not really a shape for putting on a traditional ballet conceived for a theatre. But BRB and the Albert Hall promised much change to make it a magical experience – masterminded by David Bintley, the current company director. And of course English National Ballet (ENB) regularly appear there with Derek Deane’s specially architected classic works – the Swan Lake is very well done and seems to give everybody a fine view of the action by multiplying up the numbers of dancers involved.

BRB’s production for the Royal Albert Hall is different from the English National Ballet in-the-round approach – here we had a thrust stage occupying half the arena with the equivalent of stalls seats in the other half – it’s meant to be viewed, ideally, from the front. The orchestra is placed high above the stage (beneath the giant Henry Willis organ that dominates all) with dancers making entrances and exits beneath them though a mirrored backdrop. Flanking the orchestra and organ are two huge projection screens that really take the place of stage designs and, together with occasional projections over the organ and orchestra, augment the action. Most notably they become the giant tree through which you travel to the Land of Snow. Completing the staging are some huge baubles that descend down over the arena for the party/transformation.

So does all this re-staging work? Well, it’s a valiant effort, but it’s not as good. Ultimately pictures of a large trees just don’t offer the same concentrated power of a ‘real’ tree growing and dominating a proscenium stage. If you have seen the production before in Birmingham (or at the Lyceum), odds on you will be disappointed. And before you even get to the transformation there is the party at the start of the ballet and, without much by way of sets, it all looks rather small, lost and perfunctory – a party in an aircraft hanger rather than a richly sumptuous Stahlbaum house. All that said, there are some compensations in seeing BRB at the Albert Hall.

The good news is that the thrust stage is huge and once we move on into dance rather than strict story telling the BRB dancers really let rip, dance big and rise to the occasion. It’s just the company, there are no extra dancers, and they whip up a storm, aided to a degree by the mirrored backdrop. The company were dancing on home turf before Christmas and that gave them a crisp togetherness that we don’t always see in London. Come to that, there was a boldness I don’t always see when I go to Birmingham either. Clara was danced with fresh charm by Arancha Baselga and the Prince was a bold and honest Brandon Lawrence, absolutely devouring the space. Every time I see him I wonder why he is not a Principal but instead finds himself two ranks down as a Soloist. He may be bold but he is not a show-off – he is a noble prince in the finest tradition. His Sugar Plum was Celine Gittens – also quietly noble and very capable – what a wonderful couple they make. Although I think all the dancers really delivered their steps, one more I have to particularly mention is Lachlan Monaghan as the Jack-in-the-Box who bounced extra high and really enlivened the party. The orchestra, under Philip Ellis, also did Tchaikovsky proud. Peter Wright’s glorious ballet might not shine quite so magically in its Bintley/Albert Hall version but the dancers certainly did and the company should be mighty proud of that. 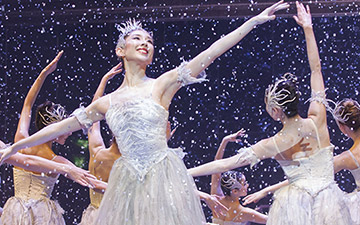