For some, The Nutcracker season has become a bit of a ball and chain, something to tick off their ‘To Do’ list at Christmas. But there are those of us that relish the thought of watching another production, a new cast, a debut here and there, along with the chance of being swept away with Tchaikovsky’s magnificent score. Of course, one has favourite moments, and there are a few that I find less than enthralling, but overall it is a welcome seasonal event each year.

Absent from the repertoire at the Royal Opera House this year, it was good to see Birmingham Royal Ballet inhabit the Royal Albert Hall with Peter Wright’s production for its third consecutive year. In spite of all the problems with performing a proscenium arch ballet in an arena setting with a purpose-built stage, it is no less magical than any other production and in some ways, it works advantageously. Having the orchestra, The Royal Ballet Sinfonia, situated high above the stage, under the baton of the always excellent Koen Kessels, adds another dynamic which enhances the overall enjoyment.

The Royal Albert Hall cannot accommodate anything hanging from the flies, thus the problem of the famous growing Christmas tree, always a delight for the children in the audience, had to be solved. 59 Productions thus stepped into the breach and designed overwhelmingly large projections of a Christmas tree complete with appropriate decorations. Indeed, throughout the performance, the projections helped to outline the story and allow us to see into Clara’s dream world in magnified definition. Dick Bird’s sparse (through necessity) props and setting, fares pretty well, all things considered. I especially like the plain back panels, which double as entrances and exits, that turn into the doors of a drawing room during the party scene.

It was my first experience (in almost three decades) of reviewing from the very top of the house in this vast arena. Alarmed at first, that this might create problems with identification, at the end, it felt closer to a revelation, with the snowflake scene especially appealing. However, it did prompt my companion to ask after the first act if there were any adults in the production at all, so tiny were these figures! That, along with a nearby mobile phone receiving messages and a number of people getting up during the Prologue (and being let back in) or being let in long after curtain up did not make for an easy start. However, I was very quickly absorbed in the superb dancing.

How do you project to the back of an auditorium that seats in excess of 5000? It seems some people manage it with the sheer brilliance of their dancing and others actually have the stage presence to engage us, even at long distance. Karla Doorbar as Clara, has both attributes. She was a delightful, believable adolescent who dances with an easy, clean technique. With the exception of Simon Callow’s bellowing voice over/narration (as Jonathan Payn’s Drosselmeyer), the Prologue is much as one would expect. There is a spritely dance at the start of the party in which the radiant charm of Lachlan Monaghan, partnering Doorbar, was instantly recognisable. The choreography also benefited from my vertiginous viewpoint, showing not only the beauty of well-structured patterns but actually heightening the clarity and neatness of all the dancing. When Drosselmeyer brought his dolls to the stage, Aitor Galende as Harlequin and Maureya Lebowtiz as Columbine, both displayed superb mechanical mimicry, but Tzu-Chao Chou as Jack-in-the-Box blew the roof off the Hall (no mean achievement) with his extraordinary airborne antics. A mention for Marion Tait’s Grandmother and Michael O’Hare’s Grandfather can’t be omitted. We are so lucky to have these fantastic artists still on stage and their performances are incomparable.

The transformation scene was equally watchable. Max Maslen as The Nutcracker and Brandon Lawrence as The Rat King meticulously led a battle scene that delivered all the goods. When Maslen was replaced by César Morales as The Nutcracker/Prince, the pas de deux with Clara that ensued was ravishing. Doorbar absolutely lived the dream and Morales was the danseur noble of the moment.

The snow scene is one of the prettiest and well danced versions I have seen with Yijing Zhang as The Snow Fairy leading with crisp panache, her band of Snowflakes and Winds swirled with grace and precision. Indeed, the Winds in the form of Gabriel Anderson, Haoliang Feng, Edivaldo Souza da Silva and Alexander Yap whipped up quite a storm, with jetés that cut through the air with fierce attack.

Act II is sensibly constructed, with the divertissement explained by Drosselmeyer’s dolls originating from different countries. Each dance was exemplary but Maslen and Monaghan were a particularly impressive Chinese duo, pirouetting both skilfully and musically and Galende, Gus Payne and Joseph Taylor were tremendous in the Russian Dance.

Céline Gittens led her troupe of blooms with ballerina brilliance as The Rose Fairy, beautiful épaulement adding extra elegance to her graceful form, in what was a wonderful build up to the grand pas de deux. Momoko Hirata could not be better suited to the role of the Sugar Plum Fairy. Her diminutive frame, her fragility, her softness of port de bras, are ideal. She has an air of sweetness without seeming overly saccharin or coy and technically she is unfazed by the intricacies or magnitude of a pas de deux that is fiendishly taxing. Paired with Morales, who is equally pure of line and devoid of mannerisms, the results were thrilling.

Two things during the performance, one of which was turned miraculously around, which were perhaps unfortunate. The stage, which is temporary, does not have the resilience of a permanent dance platform, meaning that pointe shoes clatter and even the fleetest men sometimes sound as if they are landing from jumps without going through their feet. However, this is a minor gripe given the standard of the performance. The second thing was Jonathan Payn, a very kindly Drosselmeyer, sustaining a fall at the back of the stage. However, such was his comic timing, for one split second I thought it was deliberate as he more or less slid directly beneath Chou’s phenomenal jeté – bounding onto the stage. The moment rescued by a true professional! It’s a thoroughly entertaining evening of excellent dancing and has restored my faith in sitting at the top of the house – if you give enough, it travels way beyond the footlights and BRB gave in spades. 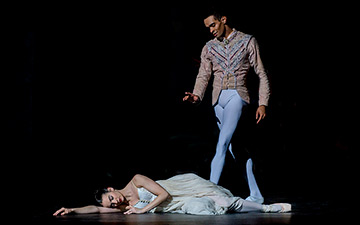