It surprises me that so few choreographers have been tempted by the absorbing narratives of eighteenth and nineteenth century English literature; and in terms of the attractiveness of these compelling works to be told in ballet, Charlotte Brontë’s Jane Eyre must be at the forefront. And, yet, Patrick de Bana’s production for Shanghai Ballet (seen here, in London, in 2013) and Nicola Tongue’s short-lived version for London Children’s Ballet, in 2008, are rare examples. So, this belated London premiere of the full-length work that Cathy Marston made for Northern Ballet, in 2016, has been much anticipated. Marston is a consummate story-teller in movement and mime and her take on Brontë’s masterpiece was well worth the wait.

It’s a challenging work to get right in dance theatre interpretation and a common issue with Northern Ballet narrative dance is to try and absorb too much detail, particularly in early character development. There are 17 named characters in Marston’s treatment of Jane Eyre, plus another 14 unnamed roles, such that the early scenes of act one present a taxing array of detailed information that is hard to fully comprehend.

It all improves significantly with two events. First, upon the arrival of Rochester, played with a suitable mix of mystery and passion by Javier Torres; and second when Marston’s choreography transitions from event and character description into a gushing torrent of romantic dance. Her pas de deux for Torres and Dreda Blow (in the title role) were passionate, flowing and full of innovation. Rochester’s return home to Thornfield, towards the end of the first act, was an exciting scene; saddle and whip evoking his arduous horse ride without any equine in sight. Instead, Torres “rode” roughshod over his household servants, whipping the floor and everything in sight, before collapsing exhausted into a monumental armchair. As a theatrical entrance, it was as cleverly-crafted and arresting as they come.

Perhaps due to the cluttering of characters, and, perhaps also, in pursuit of narrative honesty, I found Blow’s Jane to border anonymity in the early scenes but – with the arrival of Rochester – her character burst into life with palpable and endearing expressiveness. The chemistry between Torres and Blow in these pivotal roles was excellent. It’s hard to portray Brontë’s twenty-year age gap, in ballet, but Torres successfully conveys the aura of a brooding, Byronic man of experience.

Pippa Moore was another reason for the ballet to move up a gear once the action alighted on Thornfield Hall (a mansion, of course, destined itself to come alight), with her perky, kindly portrayal of the (supposedly, elderly) Housekeeper, Mrs Fairfax; and Victoria Sibson was suitably manic in a compelling performance as the violently insane first wife, Bertha Mason, kept locked in the attic (so much for Victorian standards of mental health)! I also enjoyed Sean Bates’ rather uptight, upright portrayal of the Reverend St. John Rivers, dressed as a Sherlock Holmes look-a-like, minus deerstalker and pipe. Throughout the work, Marston’s choreography makes great use of hands, arms, legs and feet to exhibit emotions and intentions.

I confess that I warmed, only in parts, to Philip Feeney’s much-admired score; although his music for the impassioned duets was first class and character themes were clearly discernible. I expect that it is a score that one needs to listen to several times, to fully appreciate. Live music at Sadler’s Wells is always a luxury and so gratitude to John Pryce-Jones (always charismatic at the curtain calls) and the Northern Ballet Sinfonia.

Patrick Kinmouth’s costumes were evocative but I was less enamoured of the set design. The patterned moveable panels didn’t give me any great sense of place, whether in the Institution for orphaned girls, freezing on the moors or at Thornfield Hall; although the use of an upstage platform to provide opportunities for concurrent pas d’actions was a neat device.

This excellent ballet is clearly a “keeper” and a work I would like to see again and again. Northern Ballet has such a huge back catalogue of full-length narrative ballets that I hope to see some much-anticipated revivals for its half-century celebrations, in 2019. 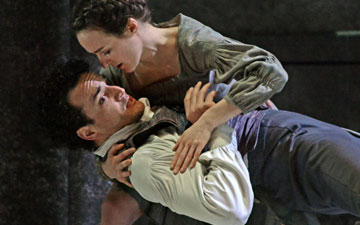 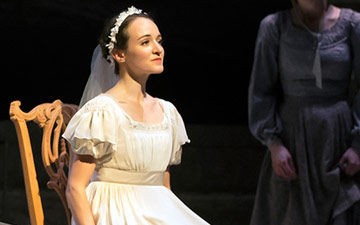 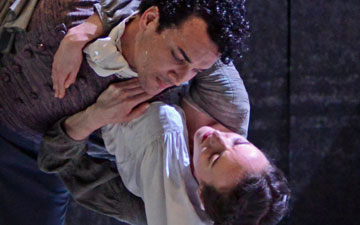 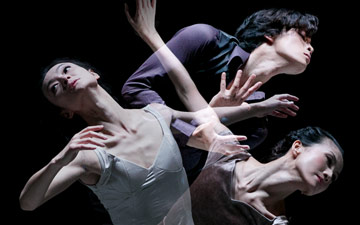