A very peculiar life-imitating-art thing happened to me while watching this show. Before the performance, I was tapping away in some social media diversion, and as the lights lowered, I was unable to locate my ’phone. I searched for it in my pockets, on the floor, on the unoccupied seats on either side of me. Had I left it in the bar? Had I dropped it on my way into the theatre space? Worrying about its absence was doubly concerning because I thought it would detract from the performance; but the multiplicity of engaging qualities possessed by Antonia Grove quickly made a mobile ‘phone seem of little importance.

And, then, at the very end of an entertaining hour; just as I fleetingly saw a gorilla, so I saw my missing ‘phone resting on the arm of the seat in front of me. This personal experience seemed to encapsulate at least one part of what Grove intended with Now You See It.

'Now You See It' Trailer from Antonia Grove on Vimeo.

The gorilla was also significant. The work covered lots of sporty things – Grove ran, she boxed (in a gleaming new pair of Lonsdale gloves) and she even triggered some other personal memories, by fencing. The sporting theme continued into the narration of a story, twice over, about an exercise she had been set, relating to a basketball match. Having been asked to count the number of times that the team in white shirts passed the ball to each other, Grove concentrated like fury, and came up with an answer, which was correct; but then her “examiner” added, “did you see the gorilla”?

I took all of this to mean that we are obsessed with detail to the extent of missing the bigger picture. Grove fretted about missing this gorilla. How could that have happened? Gorillas are not prone to wander around basketball courts but she was so intent on counting the white shirts’ passes that the much bigger thing had passed her by.

This hour-long solo was a tour de force for a charismatic performer, bearing her soul in a courageous, largely autobiographical account of an upbringing in which there were five simultaneous conversations going on at every mealtime. Grove’s reminiscences of parental scolding, sibling rivalry and her own filial acquiescence – throwing cutlery and breaking plates, but only in her mind – must have brought back similar memories from many of us in the sparse audience.

Spoken text vividly brought to life the internal struggles of this woman, recalling a difficult past, the experience of which she reconciles with her current strategies for survival. Grove has been developing Now You See It since 2015 and it is a very well-constructed mix of story-telling both in speech and dance, bridging reality and imagination. This is her story and Grove narrates it with verve and determination.

Grove manages the transitions from speech to dance (and the mix of both), including several costume changes at the rear of the performance space, with no loss of momentum. Her dancing – first in trainers and then barefoot – is arresting, with seamless sequences of beautiful neoclassical and contemporary movement, spread across the space, in diagonals and circles, punctuated by the references to fencing, running and boxing. Aideen Malone’s lighting designs enhance the necessary compartmentation of the work, not least in the effective, momentary reveal of the gorilla at the very end.

I have long been an admirer of this outstanding artist – having many fond memories of her career at Rambert, her former Probe life with Theo Clinkard and later performances with Vincent Dance Theatre (for which, last year, she garnered a well-deserved third National Dance Award nomination) – and this one-woman show was a special gem. It kept me absorbed throughout with an eclectic mix of entertainment, illusion and challenging mental stimulation. And, thanks to seeing the gorilla, I found the ‘phone I had forgotten all about in the hour since misplacing it! 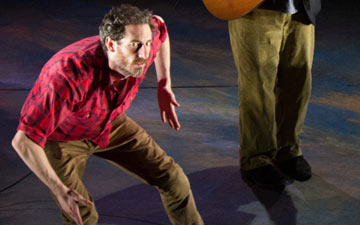 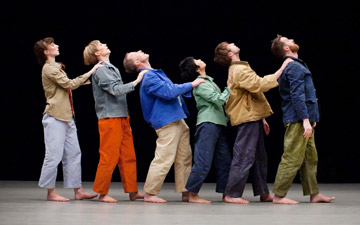 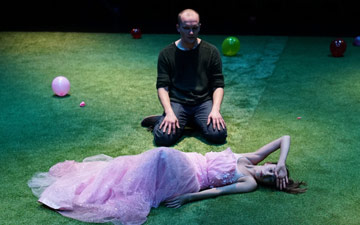