We are seldom short of opportunities to see Kenneth MacMillan’s Romeo and Juliet in London, usually from the Royal Ballet, who are planning a long run of it next spring. But it’s really refreshing to see Birmingham Royal Ballet’s take on the work, which has a more intimate, less grandiose feel. At Sadler’s Wells the audience is close to the action, pulling us into a family tragedy rather than stressing the grand spectacle. It was a fine team performance from the company but particular honours go to Momoko Hirata’s Juliet who let us know what she was thinking and feeling at every moment.

Hirata is a thoroughly convincing teenage Juliet on her first appearance with her nurse, full of youthful energy and mischief. She even giggles nervously when her parents first present Paris to her as a potential suitor. She still looks shy and unsure of herself on her entry into the ballroom. Her Juliet is something of a Daddy’s girl, judging from the relative warmth of her greeting to her parents. From here on, her trajectory is steep: convincingly transfixed by her first sight of Romeo she ultimately finds in herself a steely determination to defy her family and follow her heart no matter what.

César Morales as Romeo dances beautifully and expansively. His caring and attentive partnering seems a natural expression of his love. The balcony pas de deux flows as effortlessly as you could wish, with Morales floating a weightless Hirata though the air. It all builds beautifully to a climax in the final all important kiss. But Morales’ emotions are initially not so clearly projected as his Juliet’s and not until the final act does he find the uninhibited passion to match Hirata’s interpretation.

The trio of lads about town in Verona includes Tzu-Chao Chou as Mercutio and Brandon Lawrence as Benvolio. There’s quite a notable height discrepancy between these two which can look rather awkward. (Lawrence was a late substitution). Nevertheless, together with Romeo they are an engaging bunch. Tzu-Chao Chou’s Mercutio is a little one-note, a relentlessly perky interpretation, Lawrence is naturally elegant and polished.

Rory Mackay, a veteran of the company, is a grey haired Tybalt and gives us a rather different take on the character. Often given as a drunken thug, here he seems a dignified man struggling for control over his temper in the face of relentless provocation, before finally losing it.

BRB has just over 50 dancers and this is a big production. Sometimes it means that we get luxury casting in roles where you might not expect, for example the principal Celine Gittens as one of the liveliest harlots in the marketplace. The corps are all fully committed to rounding out their characters, the women squabbling and the men relishing their sword fighting opportunities. Even in the smaller roles there is real detail and sometimes we get a new view on a work we think we know well. Ruth Brill’s Nurse seems younger, slimmer and feistier than the usual plump old dear: Feargus Campbell’s Paris is petulant and sulky: Michael O’Hare as Lord Capulet really can’t understand how his darling little girl has got so stroppy.

Designs for this production are by Paul Andrews, and with a very few exceptions (Mercutio’s costume doesn’t do Tzu-Chao Chou any favours, and the mandolin dancers have some rather odd tasselled outfits) they are attractive and opulent. Lord Capulets dress is particularly resplendent in red velvet. The front cloth gives us an Italian landscape with a town full of walls and towers that might have been painted in the 15th century. The sets are substantial and handsome, though on the Well’s stage they can limit the space. This was most noticeable in the marketplace scenes in Act 2 where the performers could have done with more room. Paul Murphy conducted Prokofiev’s score for The Royal Ballet Sinfonia with pleasing urgency.

Though it was a strong company performance, the evening really belongs to the principal couple. Hirata’s charting of Juliet’s journey from naive teenager to determined and passionate woman was eloquent and persuasive. Morales’ dancing and partnering were exemplary throughout, and in the tomb scene a transforming ardour animated him further in his final desperate pas de deux with the body of Juliet. They gave blazing life and passion to Juliet and her Romeo. 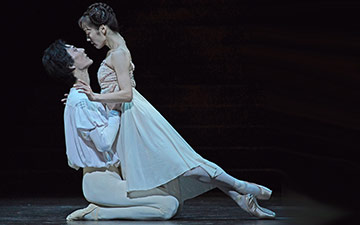