While there’s nothing so unusual about disruptive women in contemporary performance, the Splayed festival at the Place radically reframes what most people consider disruptive. Curated by dance artist Amy Bell, Splayed seeks to mess up stereotypical, heterosexual representations of the female body and replace them with other dynamic alternatives.  Bell, committed to presenting queer choreographers and performance artists whose work showcases refreshingly different femininities, addresses the invisibility of such work in dance, pointing out that experimentally complex work which politically challenges normativity is seen more readily on the Live Art circuit. Under scrutiny in the three days of performances, discussions and a festival zine are dance, sex, gender, desire, power and violence all of which are revisited through visceral concoctions of movement, visual art, music and text, and which push heteronormative complacency out of its comfort zone.

We’re ushered into the theatre and sit on chunky handmade fleshy-coloured cushions surrounding Stainton and Peake, who are reclining on a paint-splattered floor. Donna Summer’s powerfully seductive, repetitive club anthem I Feel Love plays loudly and we’re soon immersed in this sexy, messy, workshop zone. Up close and personal, Stainton and Peake naked from the waist down, take it in turn to draw on and around each other’s vaginas. With the focussed concentration and practical skill of sculptors at work, they diffuse any lingering spectator awkwardness, while interacting with affection and tenderness.

After a while they puncture the udder like sacks suspended above them and engage in a tangled, wrestling match, slipping and sliding in the viscous liquid which lazily drips down. The challenge, like a game of lesbian Twister is to remain with their genital areas in contact. Not easy and although they are humorous and flirty with each other, the effort shows also on their faces. They create a score of squelching, slurping noises as they surf over each other’s bodies, or exchange kisses, searching for different ways to touch.  Now the reference to slugs with their sticky trails and ectoplasmic bodies becomes clear.

After this creative yet arduous coupling, they separate and through intense rocking motions, pursue orgasmic states in a convincing display of autoeroticism. At times it is difficult to watch – their brave exploration of touch and intimacy is just too private for the public domain but what is fascinating is how they negotiate their relationship and frame their actions; by balancing erotically charged movement with perfunctory text – prosaic conversations about how they met (in Sainsbury’s on a bank holiday), esoteric ramblings about the shape of their developing, cosmic relationship and complex sculptural poses. While intensely personal, the intention of the work is not simply to present multiple possibilities for lesbian sexuality but as a critique of the limiting attitudes to women’s bodies and sensuality. What Peake and Stainton give us is a landscape of explorative erogenous zones outside of mainstream heteronormative erotica, but one that is psychologically complex and visually challenging as well.

The huge wood chip wall in Sheena McGrandles Figured is an important site for queer cruising. In bars and clubs, it’s a surface where people congregate and chat, a secure place to lean or simply a vantage point from which to check out others in the space. McGrandles and Annegret Schalke pursue each other across this symbolic object, but not in any ordinary fashion. In a hypnotic physicalisation of editing techniques, cuts, re-winds, slow-motion and fast-forward both women move robotically in repetitive patterns. They create pixilated images with their bodies, fractured gestures comparable to the visual effects of strobe lighting. Frequently disappearing behind the wall, they then reappear and commence the pursuit all over again, and each time the meaning of their actions is rather different. Familiar pedestrian gestures become defamiliarised and loaded with other messages. Gestures of touch that might convey desire and longing are mechanically cold. What might be understood as a masturbatory action is detached from its meaning through tricky, technical repetitions. Eating a tomato, a potentially sensuous activity, becomes random and perverse as does both women’s lip synching.

Initially McGrandles and Schalke barely make contact in their mechanical duet, gesturing towards each other, shifting direction, moving in towards each other and rewinding this action so that contact is continually deferred. Attention to detail is so acute that we can see their heads vibrating with tension and eyelashes flickering as their glazed gazes travel along vertical planes. I am transfixed by their complex cruising. Ultimately what surfaces as significant are not the sexual connotations of the duet but the perversity of the performers’ repetitive, minimalistic, tactics. It’s a work of genius and again points to the queer potential of opening up alternative viewing possibilities.

Feisty Hilde Ingeborg Sandvold storms on stage, petulant and raucous. Gripping the audience with her piercing gaze, she claps, shouts and throws herself into phrases of tumultuous motion that faintly resembles dance technique. In Dans, for Satan/ (dance, dammit!) she reflects on themes of sex and gender, whether that might involve reading out a list of STI’s; sharing snippets about her many lovers or to point out that despite being a woman she can do anything that a man can do, i.e. anything she wants. Everything she does, whether it is gulping down three glasses of milk, painting a large messy slogan in black ink declaring “Dick is God” or an intense movement section, she performs in the most unruly, chaotic manner, without ever taking her fierce gaze off her audience.

Performing with a knee injury and sporting a formidable brace, she doesn’t let this hold her back. She’s scary and impressive as she manages virtuosic leg extensions, jumps and high-energy rolls into the ground, keeping her weight off the injured leg. Intrepid and daring, Sandvold erupts with uncontrollable energy and while I’m not so convinced about some of her messages concerning sexual equality, I love the way she triumphantly displaces gendered ways of dancing to offer non-narcissistic, empowered alternatives – grappling with the history of the marked female dancer. And rejecting it. 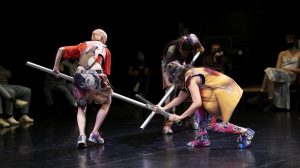 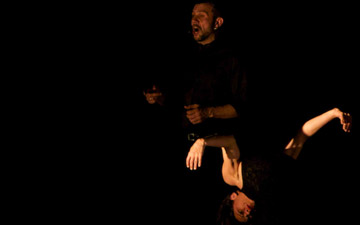 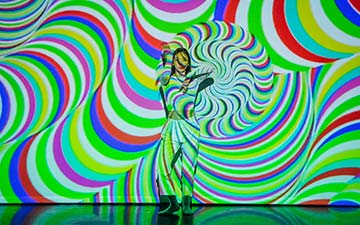