Think of dance in Argentina and the tango springs readily to mind; and, until a few days’ ago, I certainly associated Argentine dance with the milonga, not the malambo; and, yet, with roots that go back to the very beginning of the seventeenth century, the latter pre-dates the Argentine tango by almost three centuries.

Malambo is essentially a step dance, folkloric forms of which exist around the world, such as clog dancing from the North of England and Irish dance of the Michael Flatley kind. In Mexico, zapateado is a similar form and that term is also, of course, common to the footwork of flamenco. The malambo style involves striking the floor rhythmically with every part of the boot or bare foot (toes, heel, sole and sides), punctuated by fast, skipping steps and high kicks; while the upper body remains stoically postured in a macho attitude.

It is a dance form rooted in the traditions of the gaucho (South American cowboys), evolving from long nights by the campfire on the cattle trails of Las Pampas, and the competitive duels that would arise to demonstrate the gauchos’ agility and strength. In that sense, I guess we could also call it a forerunner of the street battles that turned hip-hop into another form of danced entertainment.

It is danced with a “Me, gaucho, you Jane” attitude of Latin machismo only there is no Jane, since malambo is a dance form strictly for men only (is that still allowed?). We first encounter these twelve men as mobile drummers, initially beating out complex rhythms on large drums, hanging at their sides, before adding to the effect with the sound of their feet. Beating out simultaneous rhythms in different time signatures by both hands and feet is some trick to master; and staying in harmony with eleven others doing the same thing is potentially mind-blowing.

The second incredible thing about this one-act show was the performers’ mastery of the bolas (or boleadoras), effectively lassos with a stone (or metal ball) held in a thong at the end. Developed as a hunting weapon by indigenous people in the Argentine Pampas, they were adapted by the gauchos as a means of bringing down an errant horse or cow by whirling the boleadoras around their heads before throwing to entangle the beast’s legs. It is now a circus skill – just as much as juggling or the Cyr wheel – and all of these men could whirl the boleadoras, at intense velocity, in a way that appeared mutually murderous without sustaining the slightest collision (either with another whirling ball or human) apart from when deliberately wrapping them around one-another’s arm.

The problem was that the magic wore off and the impact of both the powerful step-dancing and bolas-twirling, sharply exciting to begin with, was reduced exponentially over each succeeding repeat. This was, effectively, just a two-trick show (maybe three, if you count the sound of the drums). Each skill would have been superb as ten minute divertissements but, even taken together; it was a stretch to carry a whole evening’s performance. The producers tried to vary the effect by having the gauchos remove their boots to dance barefoot (it looked unbelievably painful) and in a single clutch of sentimental songs, sung in Spanish, by a lovelorn gaucho accompanying himself on the guitar. It felt like unnecessary fill.

All that said, one had to marvel at the rhythmic capabilities of this ensemble: as drummers, as tappers and as twirlers; the whirring sounds of the bolas adding to the aural landscape. It’s hard to define “Che” if you’re not Latin American. It’s not a name – the “Che” of Guevara fame was a childhood nickname (his given name was Ernesto) – but a form of excitable greeting. I have read that the essence of malambo is to capture the loneliness of the gaucho in deeply personal solos but this show was all too aggressively masculine in a group sense for that solitary ethos of the malambo to gain traction (sentimental songs excepted).

This show – conceived and developed by former ballet dancer, Gilles Brinas has been touring the world for over ten years (selling out in New York’s famous Fall for Dance Festival, in 2015, and performing in 32 cities, last year). In a stroke of remarkable irony, these gauchos opened their brief season in the Capital on the very day that the London-based Gaucho restaurant chain announced that it was going into administration.

The call for Argentine steaks may not be so commercially viable, these days, but the remarkable and particular skills of the cowboys, who have herded those cattle, for four centuries, appear to be in undiminishing demand. 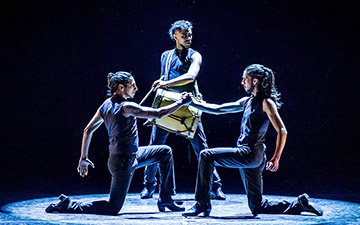