When dancer Raffaele Morra first saw Les Ballets Trockadero de Monte Carlo, he knew straight away he wanted to join the company. And so he left his native Italy, moved to New York City and became a member of The Trocks, as the company is affectionately known.

Founded in 1974, the all-male company has built a worldwide reputation for productions which give ballet a new twist. Blending skilful technique with comedy and drag for a dance show quite unlike any other, The Trocks have a repertoire of classical ballet and modern dance with their own touch of humour added.

For Raffaele, the move was clearly the right decision as he’s been with the company 17 years and has performed hosts of lead roles in excerpts from ballets including Raymonda and Swan Lake. Formerly with Compagnia di Danza Teatro Nuovo de Torino, Raffaele had built up a career in contemporary dance so moving to The Trocks meant he had to re-think some of his dancing – and learn some new skills.

“The biggest challenge for me in dancing with this company was dancing in a tutu because I couldn’t see my legs – which was a totally different experience,” he recalls. “I used to dance almost naked most of the time, because in contemporary dance that’s what you do, and then you can see every part of your body and how it moves and you know exactly where you are stepping.

“But when I put the tutu on I said ‘for the first time in my life I don’t know what I’m doing because I can’t see anything’!”

Raffaele’s other challenge was learning to dance en pointe because in classical ballet it is the ballerinas who usually dance in pointe shoes – and suffer the consequences.

“Although I was largely doing contemporary dance I was lucky to have had very good ballet teachers who always told me the importance of training fully up, so pulling up when you dance,” he says. “So when I put on my first pair of pointe shoes I didn’t have any trouble going up on my toes, I could do that technically but I still had to suffer the blisters and the black toe nails which are usual when you are not used to pointe work.”

Raffaele was captivated the first time he saw The Trocks, whose 2018 UK tour runs from September through to Novemeber – full details at Dance Consortium.

“When I went to see the show for the first time I felt the audience really participating, they were part of the show,” he recalls. “Before I joined Ballets Trockadero I remember dancing really interesting contemporary dance pieces but feeling that the audience was just not understanding them because sometimes they were too complicated.

“I enjoyed dancing them but sometimes the audience just wants to go to the theatre and have a lot of fun and I wasn’t getting that from those audiences. Then I went to see Ballets Trockadero and I was part of the audience and I felt I was being entertained and it was a really good night out. So I thought ‘I want to be part of something like that’.

“The comedy aspect of this company really attracted me. I have always found that comedy is a wonderful way of connecting people.”

The Trocks may be a comedy company but they are also a troupe of highly accomplished dancers who take their art very seriously.

“For people who have not seen our company I would say the best way to describe us is how we are – an all-male comedy ballet company where all of those parts have the same importance,” says Raffaele. “We bring a performance which is really funny and enjoyable and at the same time we bring good quality ballet. We aim to bring back the soul of those ballets – the excitement of the opening night of when the ballet was created.

“Sometimes ballet can be a little bit difficult to understand but we explain the stories, in a very silly way but also in a very clear way.”

And Raffaele believes this light-hearted approach can attract new audiences to dance.

“It’s a really good introduction to ballet for people who have never seen ballet. I’ve heard of people who, after they have seen our performance, go onto the internet to find out more about what Swan Lake is about. And when they understand the story and the story feels more approachable they then go and see the full-length ballet. That’s one of reasons I’m very proud of being part of this company.”

After 17 years with The Trocks, Raffaele has now hung up his size ten pointe shoes. While he still plays the occasional character role, he’s largely to be found backstage these days where he is ballet master with the company. This transition was always in his mind.

“I’ve experienced being at the Bolshoi and at the Royal Variety Show in London so some of the big moments in the company’s history and I am very happy to have been part of things like that. It’s been really interesting to be part of this big family, as I call it, and I’m very happy to now be ballet master with Ballets Trockadero.

“I always trained thinking of my career after dancing because I was always aware that unfortunately a ballet career can be very short. So even when I was in school in Turin I was always learning how to be a teacher as well as a dancer.

“I have always enjoyed being a ballet master particularly because of re-setting new pieces for the company. But the part I enjoy most now is the coaching part, working one-on-one with different dancers in the company and working to get the best out of them.

“It’s about understanding the dance from their point of view but also making them understand how to make it right for Trockadero. It’s about being a good Trockadero dancer.”

Raffaele is looking forward to returning to the UK.

“Personally I love the UK, it’s one of my favourite places and I visit on vacation as much as I can. It’s really rewarding to go there with the company – the audiences are the best because they combine the politeness of British culture with the enthusiasm of the American audience. It’s always very nice to perform in the UK because you get a little bit of everything from the audience.

“And this tour I’m looking forward to seeing some new places. We’ve been coming to the UK so many times that I kind of know my way around those places we’ve visited before and I always like to see new places – they always have a particular charm.”

Raffaele is keen for people to see past any preconceptions they have of The Trocks and to come and see them perform.

“We are very respectful of ballet – it’s about enjoying ballet and bringing laughter to ballet. And I would add ‘don’t be afraid to bring your kids’. Years ago it was impossible to see a kid in our audience because of the drag aspect and unfortunately people misunderstood that. But we are not outrageous, it’s just fun. They will have a wonderful time.” 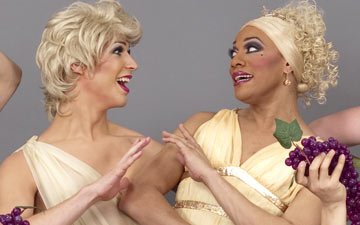 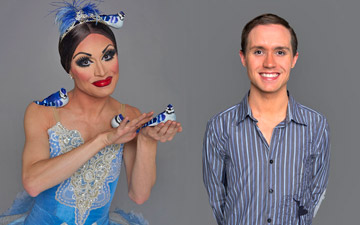