“It’s very gloomy at the moment. Very uncertain,” Carlos explained. “The bad thing is that I haven’t yet bonded with the dancers at BRB because I joined in January and I was on tour with Acosta Danza when this happened.” Company meetings and class have not always been successful from his home: “we live in a valley and our village doesn’t yet have fibre optic cable so the internet is up and down.” Happily, with one brief interruption, we managed to remain connected.

The lockdown has had its compensations. Carlos is helping with the home-schooling of his daughters, spending much more time with them than would normally have been the case for this dance mega-star just embarking on a big new job. “That is a good thing out of all this madness.”

Like so many ballet companies, BRB is using the lockdown to develop digital content for various platforms. In a sense that has helped Carlos in his bid to shift the image of the company. “I don’t want to be the kind of director that is very corporate,” he explained. “I want to be useful and dynamic. First of all, I can only be myself,” he said with a smile. “We are on a quest to bring new, more diverse audiences, and especially young audiences to see our shows and I think the digital content may help even while we aren’t performing live. We must also now work hard to make every part of the company accessible to all people: audiences, performers, backstage staff and administration.”

Home from Home: The Swan from Birmingham Royal Ballet on Vimeo.

Early in lockdown, Carlos adapted Fokine’s choreography for The Dying Swan into a solo for BRB principal dancer, Céline Gittens, to dance in her living room (sharing a split-screen with pianist, Jonathan Higgins and cellist, António Novais) giving it an uplifted ending of life and hope, renamed simply The Swan, which not only garnered tens of thousands of views online but also featured in a BBC Four programme entitled Dance on Film, a compilation of brief contemporary dance films, which Carlos hosted.

Given the radical nature of some of those films, I wondered if the quest for new and diverse audiences might alienate BRB’s steadfast balletomane following? “As you know I’m a big fan of contemporary dance and anything that is the future but also I like and respect tradition. However, I recognise that if you are going to revisit a production like Don Quixote that speaks of the past, there is no point to deliver like Petipa did in the 1800s. It needs to be made relevant to today.”

“We will always be there for our core audiences,” Carlos explained, “but we want to get rid of the old-fashioned attitudes and take the stigma away from ballet, especially within the local Birmingham community. We have to present ballet that mirrors the people of Birmingham so that they see themselves in topics that will interest them. Hopefully, this means they will come again and then the third time they will be coming to see The Nutcracker!”

At the time we spoke, BRB had cancelled all its summer shows and had brought the company holidays forward to start on 22 June until 27 July. “After that we hope to have nine weeks of rehearsals,” explained Carlos, “because we are still planning to have a triple bill, including Balanchine’s Theme and Variations and a ballet that is new to the company, Chacona by Goyo Montero (created on Ballet National Sodre in Uruguay, in 2017). We are also aiming to have Romeo and Juliet and Swan Lake, which we were still due to perform in Plymouth before the Covid-19 lockdown. It’s a lot of rep!”

This all depends on how long the theatres remain closed. “I keep hearing that theatres will be the last to open and that makes me very nervous. Even if we can open before Christmas, social distancing within the theatres, even at one metre – let alone two – will mean that we will lose a lot of potential income. A theatre that seats 1,500 will perhaps only allow 500 or less due to social distancing. And, there is an even more difficult scenario because if we don’t get to do The Nutcracker we will be in deep trouble since it represents almost half our annual income from ticket sales; but we have to be prepared for that. At the moment we are just considering different scenarios to see what it looks like. We have furloughed staff to save costs to counter the economic impact that we are going to face.”

The considerations include some dramatic shifts in planned repertoire. Carlos’ Don Quixote should have been premiered by BRB in June but it has now been shifted to the spring of 2022. The Carlos Presents programme has been postponed until the autumn (which is still very much in doubt) where it is due to take the place of the planned triple bill (Seventh Symphony, Kylián’s Forgotten Land and another new creation), which has now been moved to autumn 2021. “Postponing things has resulted in a lot of disappointed people,” explained Carlos. “But, everybody is in the same boat of shuffling things around. The summer programme was already on sale and we were ahead of our targets: we were selling very well so it makes sense to retain those ticket sales and move it to the fall instead and so that’s what we did.”

But beyond that simple postponement and rearranging company holidays to fit in the necessary nine-week rehearsal period, everything else remains up in the air. “The whole ballgame of plans is going to be changing due to coronavirus,” Carlos explained. “I don’t even know that what I have put forward will be possible due to the economic factors; everything will have to be continually reviewed. We will have to see when all this madness finishes, where we will be sitting economically and then react to that and bring a plan that is more realistic.”

We closed by speaking about Carlos’ homeland of Cuba during the age of the covid-19. “Everybody in Cuba is locked down,” explained Carlos. “And, in Cuba that is much more difficult than here. In Cuba there is no shopping online, you have to stay in a queue to buy chicken or bread and social distancing is impossible.”

“We had to close everything. We had a programme with kids from disadvantaged backgrounds and we had to send them all home. We have been trying to keep the motivation going and I posted a video on twitter and Instagram that we made with the members of Acosta Danza. Now we are in conversations to do the same for the students of the academy.” Although lockdown may have given Carlos more time to spend home-schooling his daughters, he has certainly been busy giving hope and motivation to the dancers and students – in Birmingham, Havana and around the world – who depend on his inspiration and leadership. 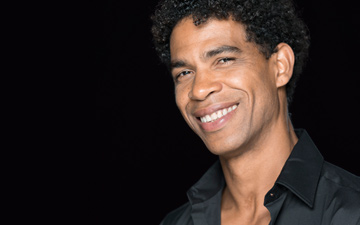 Carlos Acosta – Dancer, Directer, Choreographer: ‘I am a man on a mission – I always have been’ 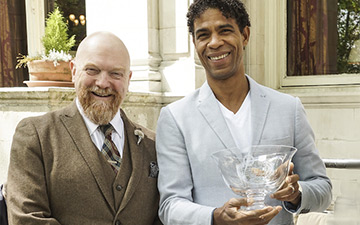