Liss Fain Dance knows how to set a mood. As I walked into Z Space on Friday night for the opening of A Recomposition: I Don’t Know and Never Will, I was completely transfixed by the environment – both visuals and sound. Piles of firewood and leafless branches were scattered and arranged around the stage. Large wing-shaped cellophane hung from the light grid-like clouds. A long path of soil stretched from one corner of the stage to the other. Matthew Antaky had designed a container that felt natural and raw, desolate and wintery – an unassuming canvas onto which anything might emerge. Jordan Glenn’s original score, played by Nava Dunkelman, Jacob Felix Heule and Glenn, had started ahead of the performance, captioning our experience as we took in the room. Soft, rumbling timpani sounds and atmospheric percussion created a meditative state, hypnotizing and peaceful at the same time – it was stunning. I only wish I had been as transfixed by Recomposition itself. It had so many wonderful individual components (including the spatial design and the soundscape), but as a connected whole, it was slow to arrive fully.

Choreographed by Artistic Director Liss Fain, Recomposition is a new piece, though it references and revisits Fain’s I Don’t Know and Never Will, which premiered last spring – almost like a second chapter in a larger choreographic cycle. I didn’t get a chance to check out the original work, so my viewing on opening night wasn’t an exercise in comparisons or contrasts between the two. Recomposition and its ideas and choreography were brand new to me. Using Fain’s own letters and notes from decades ago, the work mined the unfinished past, or as the program notes shared, “How does each of us connect the past to the present? What does one hold onto?” That narrative/concept was abundantly clear in places and less so in others.

In Recomposition’s first scene, Fain and actor Jonathan Siegel brought some of these letters to life, and it was powerful. Siegel gave voice to the correspondence, delivering a series of soliloquies. Fain watched him intently taking in the intonation, the emotion and the sentiment from this past relationship. The pair traversed the soil pathway throughout the vignette, coming together and moving apart, wistfulness, regret and nostalgia oozing into the space. Simultaneously, four dancers, costumed by Mary Domenico in amber-brown and adorned with sequined tree branches, moved in the areas surrounding the soil. They cycled through varied choreography – legs and arms extending into the space, bodies cartwheeling over the soil pathway, high-velocity jumping and diving. The choreography was technically rich and impeccably danced by Sonja Dale, Megan Kurashige, Shannon Kurashige and Sarah Dionne Woods-LaDue. Though how it might be connected to what Fain and Siegel were doing wasn’t apparent.

And that was the biggest challenge I found with Recomposition. I truly enjoyed all the parts. Potent scenework would unfold during the fifty-minute dance. The sensory atmosphere would continue to astound. Gorgeous choreographic phrases and sequences would grace the stage – complex, cantilevered partnering; entwined postures and shapes. But the movement and the story felt unrelated. Not that I was expecting the dance to ‘act out’ what was happening in the scenes; that would be too on the nose. And I’m sure for the company, the connection wasn’t tenuous at all, but for this audience member, the combination of fairly abstract dance and a highly narrative container didn’t add up.

Having said that, the movement in Recomposition’s final moments did feel more connected. All five women (the quartet plus Fain) hungrily dismantled the aisle of soil. They picked up handfuls of dirt, jetéd through it, rolled and slid in it and spread it all over the stage. It communicated a deep statement about remembrance. That sometimes remembering can feel very straightforward and tidy, like the original pathway, but more often than not, it is disordered, messy and cluttered. Recomposition had reached a poignant end where the dance and the concept had come together. While striking, it also made me a bit greedy. I wished the link could have happened earlier.

I also missed the immersive-ness that many Liss Fain Dance performances have. Fain and her collaborative partners often welcome viewers to roam around during company performances like one might at an art installation. For the audience to decide when to linger and when to move on; to notice what scenes they may be pulled to as well as what vignettes may not pique their interest – a real ‘choose-your-own-adventure.’ They went a different way with Recomposition. The audience was assembled around the perimeter of the performance space and pretty much stayed where they were for the whole show. Before it began, Fain invited the crowd to write a note to a lost connection and explained that a few would be chosen at random and read aloud during the piece. So there was that participatory element to the evening. But generally, Recomposition had a more static viewership experience that I was expecting. 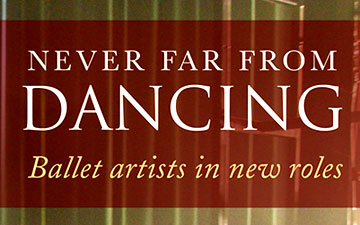