David Bintley, who steps down as director of Birmingham Royal Ballet at the end of the 2018/2019 season, describes the current double bill as ‘two ballets fuelled by power and politics’. Since ballet is a tricky medium to convey political information (see MacMillan’s Mayerling and Anastasia), it mostly has to be inferred from programme synopses.

BRB’s newest work, Ignite, takes its inspiration from an 1835 painting, The Burning of the Houses of Lords and Commons, by J.M.W. Turner. The conflagration was accidental, not revolutionary arson. The burnt building’s successor is the Victorian neo-gothic parliamentary edifice by the Thames, hardly the harbinger of a new world order.

Ignite’s choreographer, Juanjo Arqués, and his dramaturg, Fabienne Vegt, are primarily interested in translating Turner’s dramatic painting into movement. (Ignite, part of BRB’s Ballet Now commissioning project, is a co-production with Dutch National Ballet, where Arqués started his career.) The ballet, which includes pointe work, is in three movements, depicting the way the fire took hold, flames and smoke mirrored in the river below. In a second painting, Turner showed a huge crowd watching the firemen’s attempts to control the inferno. We, the audience, become spectators of the ballet’s turbulent effects.

Reflective panels at the rear of the stage rise above the action below. Silken shirts in shades from yellow and orange to deep crimson swirl around the dancers’ shoulders as they combine in quartets, couples and a trio (Max Maslen, Miki Mizutani and Tzu-Chao Chou as dynamic elements of combustion). A white-clad figure moves among them: Mathias Dingman as Sky.

In the second movement, he joins Delia Mathews as River, with her entourage of women in blue-grey trousers, drifting in bourrées. Kate Whitley’s stirring music quietens into shimmering melodies for strings as Sky and River perform a pas de deux that could be about love, the meeting of twin souls, the union of air and water or ice-skating practice. He leaves and she returns to her signature sequence of chaîné spins with her elbows tucked into her sides, fingers extended. River ripples on, untouched by the conflagration.

Mathews then stands with her expressive back to the audience as she witnesses the crescendo of flames, including a fiery pas de deux for red-clad Céline Gittens and Brandon Lawrence. After the stage has filled with silken flourishes to blaring brass and crashing percussion, the cast remove their shirts and turn around to face us. The reflective panels descend, the orchestra is replaced by crackling sounds and the garments are dropped as charred embers. It’s an effective ending to a tumultuous ballet: what it implies politically is anyone’s interpretation – probably different in Brexit Britain from European Netherlands.

The revival of Bintley’s 2015 The King Dances would suit the intimate Sam Wanamaker Playhouse in Shakespeare’s Globe, lit by candles. In the long black shoebox of Sadler’s Wells, it is too dark to see the dancers’ feet, in spite of the shiny floor covering. Bintley based it on accounts of Le Ballet de la Nuit, a 1653 epic in which 14-year-old Louis XIV appeared in five roles. The precocious monarch fancied himself as a dancer – so much so that he inaugurated a ballet academy (still going strong in Paris) to train his courtiers to match his standard.

The night-time ballet starts after the sun has set. Flaming torches illumine the dominating figure, La Nuit – Louis’ Chief Minister, Cardinal Mazarin (Yasuo Atsuji) – and a quartet of gentlemen. They adopt baroque postures that are the origins of ballet: elegantly placed feet (in heeled shoes), well-held arms and shoulders, proud head and neck. They can perform at speed, spinning and jumping in neat sissonnes.

When they are joined by four ladies, men in masks and full sleeves and skirts, the steps become lighter and even swifter, lit by candelabra. The young king (Lachlan Mohaghan) is always shadowed by La Nuit, his regent Mazarin. Louis shows off his cabrioles and arabesques to prove he is the finest dancer of all. Once left alone, he has a vision pas de deux with the goddess of the Moon, Selene (Yvette Knight), who complements him as the Sun King.

This scene jars as a modern fantasy, out of keeping with the 17th century masque of the Ballet de la Nuit. Why would adolescent Louis XIV dream of dragging an idealised woman around on the floor, especially when she is meant to represent peace and purity? When he raises her, she adopts crescent shapes to demonstrate that she is indeed symbolic.

She then becomes Odette, whisked away from him by Von Rothbart/Mazarin, now called Le Diable, the Devil. The ballet becomes very silly as Louis sleep-dances in his nightgown, manipulated by monsters in Halloween outfits. They swing him between them like a female courtesan – a Mitzi or Manon in a MacMillan brothel scene.

Gravitas returns for the finale, in which the courtiers behave with formal decorum, dancing baroque steps in geometric patterns. Some of them apparently represent qualities of grace and honour, much like Aurora’s fairy godmothers. In a coup de théâtre, Le Roi Soleil makes an appearance, covered in gold bling as the sun god Apollo. Standing arrogantly in a crossed fourth position, he represents absolute majesty and the male might of dancing (if a pity about his limp blond wig.)

The King Dances is uncertain whether it’s a masque or an overlong instruction in the courtly origins of classical ballet. The performance I saw lacked conviction: the company’s energy was diverted into the swirls and surges of Ignite‘s contemporary ballet choreography, rejoicing in the freedom from academic constraints. 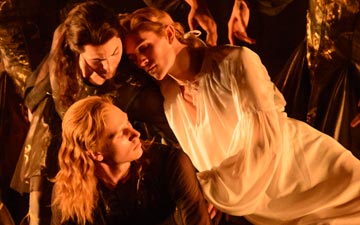 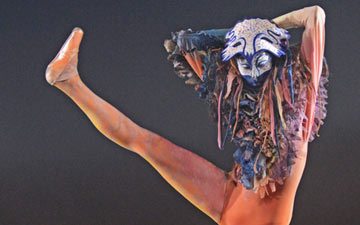