Vicki Igbokwe’s bold dance retelling of the classic fairytale Hansel and Gretel has a sense of playfulness at its heart, and something of a political message for adults to chew on too. Its soundtrack is an African-tinged mix of house, jazz, soul and grime, and the choreography is equally mixed, encompassing the fast pace of house dance, the groundedness of African styles and the bold gestures of waacking and vogueing within a robustly athletic contemporary framework. It’s just a shame that these elements don’t always come together to make an entirely coherent narrative.

On a simple primary-coloured, building block stage, the four dancers offer a new version of the well-known tale – one in which Hansel (Marc Stevenson) and Gretel (Mayowa Ogunnaike) start in an African village, head off on their own to the big city, pick up a guardian, Wasi (Esme Benjamin), then end up first in Dover and then in Brixton, negotiating the capital and the care system (represented by Rudzani Moleya). Instead of breadcrumbs, they follow London landmarks and memorable smells to find their way when they are split up from Wasi. And, naturally, there is an umbrella-wielding, biscuit-bearing witch to overcome as well.

Igbokwe and her writer Gbolahan Obisesan opt not to try to nail down any of the mad jumps in logic, preferring to emphasise the children’s boldness, imaginative powers, camraderie and sense of adventure. But it does make things a bit confusing. And providing each character with a voice, courtesy of a recorded voiceover, puts an odd distance between audience and dancers, as though they were performing behind glass. Maybe this is why, on the afternoon I saw it, the children watching were somewhat reticent about joining in with the audience participation segments. 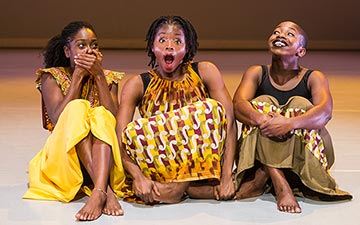