Back for a second run at the Linbury only 8 months after its première, Liam Scarlett’s Hansel and Gretel is again playing to full houses. By now the ballet is well known to be a disturbing dip into frighteningly distorted minds, and few will have arrived expecting a cute little gingerbread house and a happy ending: instead we get a cleverly staged and very well danced psychodrama, scary both in what we see and what we further imagine.

There are, though, two fundamental problems which hold the piece back from complete success. The first, inherent in the story, is the difficulty of casting the two children and especially Hansel: it seems easier for a young woman to look 10 years old than it is for a young man, and however hard James Hay tried to convey his character’s youthfulness through movement, he still has an adult face and the sight of him cuddling his teddy bear adds another – and presumably unintentional – layer of discomfort and maybe even ambiguity.

The second and more serious problem is the decision – I don’t know whether it was Scarlett’s own or was forced on him – to stretch the piece out way beyond its natural length to satisfy the current obsession with ‘full-evening’ works. Why, why? It seemed to me to cry out for a tighter structure: especially in the hour-long first part the tension that was built up in a finely choreographed and delivered encounter would drain away as the scene went on and on; and then we had to go out and chat through a 25-minute interval and come back for more. In the contemporary-dance world the 60-minute, no-interval format is commonplace and completely accepted and it would immensely benefit Hansel and Gretel to be cut down to that length.

That said, Scarlett has created some remarkable sequences and images and I have nothing but praise for his dancers. Bennet Gartside manages to show us the moral cowardice of the children’s father without losing our sympathy – and that’s even before we meet his dreadful wife, the wicked stepmother, played with wonderful relish by Laura Morera in black suspenders and a ginger wig (among other things). Leanne Cope, as Gretel, steers well clear of sentimentality and even sweetness – she’s a down-to-earth, sensible girl and a good balance for Hay’s more sensitive and neurotic Hansel. Both the Sandman (Donald Thom) and the Witch (Ryoichi Hirano) had stepped into this cast as replacements: Thom was well up to the challenging task of making his effects entirely through movement, as his face is covered by a mask throughout; Hirano, in the first big acting role I’ve seen him do, was horribly convincing as the creepy but ultimately pathetic paedophile.

Full marks, too, to Jon Bausor’s designs, making the very most of the Linbury’s reconfigurability: I really envied those who didn’t already know how the witch’s kitchen would rise out of the depths. (Though that has the downside that it would presumably be very difficult to stage the piece anywhere else.) I was less impressed by the music, though: it was written deliberately to remind us of film scores from the 50s (the period in which the ballet is set) and so it was appropriate, I suppose, that it mostly acted as background rather than an equal partner, but I was disappointed by the predictability of some of its more assertive passages.

One for the ages? No, not at this length: but cut, it could survive and maybe one day it will be cherished as an early work of a major choreographer. 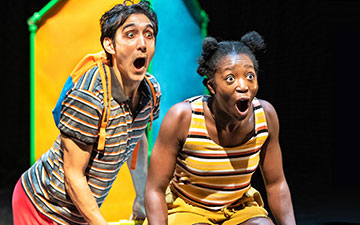