Does every classical ballet company need a Don Q in its repertoire? Probably, since audiences need cheering up with an extravagant fantasy of Spanish highjinks, dignified by association with a literary epic. Never mind that the 19th century ballet has little to do with Cervantes’s 17th century novel: it’s a farrago of fun, a vehicle for flashy dancing of all kinds, from folksy to classical. Carlos Acosta, who first mounted his production for the Royal Ballet in 2013, will stage it next year for Birmingham Royal Ballet, in his new role as its artistic director.

He has performed so many versions of Don Quixote that he wanted to put his own stamp on it, making use of the Royal Ballet’s theatrical as well as technical abilities. He has aimed for a sense of community in a bustling Spanish town, whose inhabitants burst out dancing at every opportunity, with just a few on pointe. Classical ballet set pieces are constantly interrupted by comic incidents, boisterous beggars or preening matadors. The Act I setting is so busy that the townspeople could calm down, stop expostulating and for heaven’s sake, stop fanning themselves.

Acosta has provided a narrative thread by giving more prominence than usual to the demented old Don (Christopher Saunders). There’s a substantial prologue to establish his hallucinations, with his idealised love, Dulcinea, haunting him like La Sylphide. His bumbling servant, Sancho Panza (nimble David Yudes in a fat suit) is established as a prolific thief. They set off on would-be chivalric adventures, intervening in every scene and continuing their quest at the end on a wonderfully decrepit old nag (though there’s no donkey for Sancho Panza).

Act I takes a while to get going, in spite of animated eruptions of dancing by Marianela Nunez as Kitri and her two girlfriends, Yuhui Choe and Beatriz Stix-Brunell. Nunez, sunnily flirtatious, is entirely plausible as an innkeeper’s daughter, charming his clients with her exuberance. Vadim Muntagirov as Basilio is no penniless barber. He must be the illegitimate son of the local grandee, his bearing so naturally elegant, his partnering of Kitri so courteous. Though he’s sweetly desirable, this Basilio would never philander with the village girls. Kitri can be confident he’s hers.

The action heats up with the arrival of the matadors and their smouldering supremo, Espada (Ryoichi Hirano). His encounter with the street dancer Mercedes (Laura Morera) promises more passion than the loving liaison between Basilio and Kitri. Morera exploits her sensual phrasing of Minkus’s music in a way that Nunez can’t in this Act  – she’s too busy being vivacious.

She shows a different side to Kitri in the tender start to Act II, before she is transformed into the Don’s dream of Dulcinea as a classical ballerina. The vision scene was ideally danced on the opening night, with Anna Rose O’Sullivan as a scintillating Amour and Fumi Kaneko regally assured as the Queen of the Dryads. Tim Hatley’s design choices look very odd in this Act. First, a lurid tropical sunset behind a gypsy encampment; then a parade of differently scaled windmills; then a backdrop of hugely bright echinaceas towering over a bevy of nymphs in pastel-coloured tutus. No wonder the dazed Don had a headache when he came to.

Act III is a riot of seguidillas, habaneras and fandangos, as the townspeople celebrate the return of the runaways and their rapid marriage, secured by Don Quixote’s intervention. Before the famous Grand Pas, Hirano seizes his chance to steal the limelight in an outfit of emerald green silk with pink stockings. He’s a joy, far funnier than Kitri’s comic suitor, Gamache (Bennet Gartside, in an unrewarding role).

Muntagirov comes into his own as a danseur noble in white tights, his long legs airborne in scissored leaps and flying jetés. His upper body remains serene, as though no effort is required to impel him upwards. Nunez shows off mischievously, confident that he’ll be in place to catch her, halt her multiple pirouettes and gaze into her eyes. Now it’s her turn to play with the music, sympathetically conducted by Martin Yates.  Where she used, in earlier Grand Pas performances, to flaunt her skills brazenly, she now exudes happiness. Rightly, the first night audience gave the pair a standing ovation when they took their bows. Theirs was a performance that caught up everyone in the sheer pleasure and excitement of spectacular dancing. Olé! 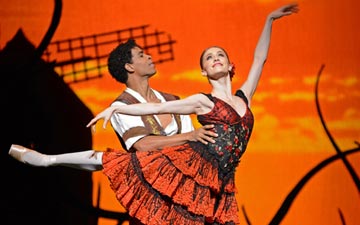 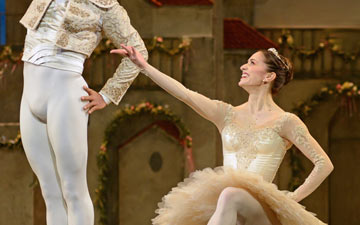 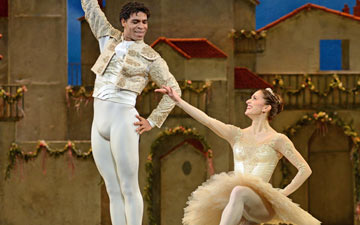 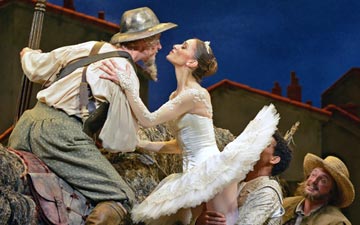 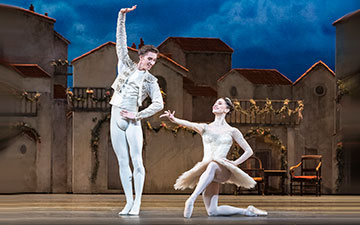