Putting two ballets based on fables in one programme raises the question of whether they are moral tales for children or allegories of adult experience. The answer must be both, though the double vision is uneasily accommodated in Liam Scarlett’s The Cunning Little Vixen for the Royal Ballet School and a recent interpretation of Frederick Ashton’s The Two Pigeons by the Royal Ballet. The double bill is dedicated to HRH the Prince of Wales, president of the RB school and company, on his 70th birthday. He was present in the Royal Box on Wednesday.

Kevin O’Hare, director of the Royal Ballet, commissioned Scarlett (Artist in Residence) to create a ballet for the students to show the link between the school and the company. It’s stronger than ever under O’Hare’s leadership, since nearly 80 per cent of the present company have come through the school (admittedly only briefly in some cases). However, not all the 43 students involved in The Cunning Little Vixen are going to make it into the Royal Ballet or Birmingham Royal Ballet. The experience will, of course, stand them in good stead when they pursue professional careers in other companies or go in different directions.

Scarlett chose to choreograph his own version of Leos Janacek’s opera, which was inspired by cartoon drawings in a Czech newspaper in the 1920s. The opera’s libretto tells, among other things, of a vixen’s rite of passage from cub to motherhood and mortality. Scarlett has simplified the story, using an orchestral arrangement of Janacek’s vocal music by Peter Breiner. All the same, the full synopsis of the ballet in the red programme is required reading, since Scarlett is not as adroit as Ashton at telling a story through dance alone.

The setting, via projections by Finn Ross and Ash J Woodward, is an animated children’s picture book, brought to life by animal characters in vivid outfits designed by Scarlett himself. The woodland creatures live in fear of the gamekeeper – a vast pair of legs on the screen at the rear. The exception is the feisty Vixen Sharp-Ears of the title, who defies him.  She is first seen as a fox cub (Malvina Kolb from White Lodge), then as an adolescent who becomes a mother of many (Madison Bailey from the Upper School).

Her adventures on the way to adulthood are witnessed by a corps of insects: bumblebees, ladybirds, dragonflies and mosquitoes. They have plenty to dance, since Scarlett is ingenious at dealing with a large cast of different ages, sizes and technical abilities. He can’t help referencing Ashton when he introduces creatures such as the frog, rabbits, chickens and cockerel, all with their own personalities.

Although Scarlett keeps the story light enough for a children’s ballet, there are dark episodes from the opera, and from animal life. The rampant dog (Jeremy Chan) whom the Vixen recruits to help her escape from the gamekeeper’s yard is not a docile pet. With him, she instigates a massacre of chickens, feathers flying, by turning the hens against their cowardly martinet of a cockerel (Johnny Randall). She’s brutal to a grumpy badger (Archie Sherman), whom she evicts from his den in order to move in with her paramour, Gold-Spur the dog fox.

Her encounter with the seductive fox (Liam Boswell) is the occasion for a romantic interlude to Janacek’s loveliest music. Their pas de deux is a surprisingly long and intricate one for two youngsters who have to negotiate big brushy tails during the many lifts. She is all gangly legs, he a bit rough as a partner; they are altogether charming when they dance side by side. Madison Bailey reveals the young vixen’s initial shyness and delicacy before they eagerly nestle down on the badger’s mat.

It’s Sleeping Beauty awakening time when they rouse, meet her parents and are married in a moment, to general rejoicing. An instant litter of pups arrives – very cute, until they are encouraged by their parents to murder two helpless rabbits. Feral nature isn’t nice, and nor is the gamekeeper, still in pursuit of the vixen. She stands up to him and is shot by his double-barrelled gun, looming large on the projection screen. I’d assumed she must be dead, as she is in the opera, but according the synopsis, the (invisible) gamekeeper has tripped and misfired.

The wounded Vixen is miraculously brought back to health by a bounding frog (Daichi Ikarashi) who began the ballet with his explosive leaps, and who leads the grand finale celebrations. Apparently, since there ought to be a moral to the tale, the vixen has repented of her wrong doings and lives happily ever after with her growing family: so much for Janacek’s message about the natural cycle of life and death. The finale is fun, with everyone on stage, running in place in unison then separating for ecstatic leaps and lifts. The pages of the picture book are closed on screen, the ballet ending on an uplifting note. Scarlett has served the students well, with enough challenges to keep adults as well as children entertained, if not enlightened.

The moral of La Fontaine’s fable on which Ashton based his Two Pigeons is perfectly clear: true love requires repentance (and preferably fidelity). It’s the same message as Giselle and Swan Lake. Ashton appeared to treat the Pigeons story light-heartedly, but he didn’t intend it as a cartoon account of a twee affair. When the curtains parted for Yasmine Naghdi’s debut as the Young Girl on Tuesday, she appeared to caricature the girl’s fidgetiness, writhing and wriggling, pretending to stamp on an insect as though it were a rodent. No wonder her painter boyfriend (Alexander Campbell) was exasperated.

Naghdi was so over the top as a drama queen that I can only assume that this was a new interpretation of the role: the heroine as a spoilt ‘princess’, choosing to slum it in an attic with a penniless would-be artist. She exuded a sense of entitlement very different from her demure girlfriends’ behaviour, showing off her extravagant arabesques and bullying her boyfriend. When she imitated a bird’s pecking movements, she was more cockerel than dove, over-flexing her feet and flapping her elbows. The bird references are hints, metaphors, not farmyard imitations.

Perhaps Naghdi’s exaggeration of the choreography was meant to show the girl’s callow volatility in Act I so that her forlorn state in Act II would be the more pitiful. The result, though, was that Ashton’s variegated vocabulary of steps – small and speedy, punctuated by big effects – were all writ in capital letters, without light or shade. Her contest with the gypsy girl (Fumi Kaneko) was a caricature of indignant flouncing. The youngster is meant to lose the face-off, not tough it out. When, humiliated, she lost her lover to the raggle-taggle gypsies, she chose melodrama over pathos.

Kaneko was a sophisticated seductress, a gypsy queen by right. She performed the acrobatic choreography with mocking dignity, enticing her naive suitor to compete with her macho gypsy lover (Valentino Zucchetti). Campbell, who had been overshadowed by Naghdi’s impetuosity, came into his own in his virtuoso solo. The gypsy camp’s carryings on were enjoyably exuberant, all the more shocking when they turned on Campbell and brought him low.

The two white doves behaved impeccably in the final moments, accomplishing just what Ashton wanted without over-egging. Less can be more, as Naghdi will surely learn. 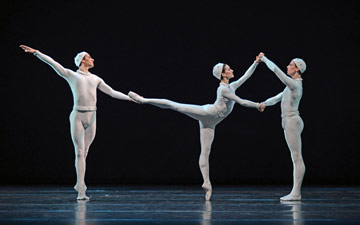 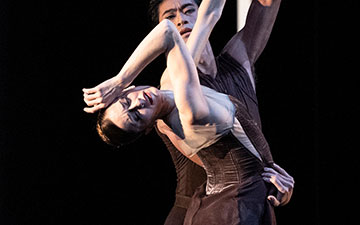 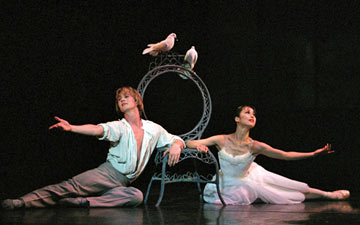