At Thursday night’s premiere of World’s on Fire from ODC/Dance, time and space felt particularly porous. Outside it was 2019 San Francisco but inside Yerba Buena Center for the Arts, it was a different place entirely. With old-time banjo, fiddle, and lilting melodies, live music by The Crooked Jades evoked a sense of nostalgia and wistfulness. Unfinished wood poles lined the perimeter of the stage – perhaps a fence or possibly an abstract rendering of crops. The women wore floral dresses; the men, billowy button-down shirts, suspenders and vests. Company founder and AD Brenda Way, Fire’s co-director, shared this in the program, “my commitment to working on this piece…stems from a desire to look more deeply into our heartland, to try to understand the values it represents and finally, to consider our points of connection.” The scene had been aptly set for such an inquiry.

Over the next sixty minutes, Fire’s choreographer/co-director Kate Weare (ODC’s resident choreographer), Way and The Crooked Jades would introduce us to a particular place, certainly one that felt far away from the Bay Area. To the people who live there, and to their struggles and dreams – vignette after vignette revealing different chapters of their story. The choreographic messages were clear, and often quite poetic in their imagery. The music was striking. And ODC’s company dancers shone. Though as an overall experience, I would describe Fire as mixed.

Throughout the entire dance, a collage of stirring emotions peppered the space. Charged, frantic phrases suggested struggle and frustration: fists, planks and stylized fight motions. Sensual duets and ardent extensions spoke of passion; angular contractions of desperation; powerful, resolute walking of resilience. In the central pas de deux, Tegan Schwab and Brandon Freeman added further sensations to the already potent atmosphere. In one moment, they stretched upwards pleading with the heavens, only to be knocked down and driven to the floor. Long searching lines saturated their duet, though twitches and jerks continually interrupted the action, which felt like a metaphor for unexpected obstacles.

While Fire was accompanied by different music selections composed by The Crooked Jades’ Jeff Kazor, stops and starts were minimized, which provided an impressive and fluid continuity. Another notable measure of connection was between the dancers and The Crooked Jades. The band was onstage for the entire work and the dancers joined them at several points, adding their vocals to the mix and extra percussion with their bodies. Nothing flummoxes me more than a lack of recognition between onstage performers; in Fire, there was one cast, and that was a significant accomplishment.

Dynamics, on the other hand, proved to be a challenge. Save for a few brief periods of levity where upbeat footwork patterns and skirt swishing made a fleeting appearance, Fire remained at the same dynamic level. Yes, many emotions were present, but the tone seemed forever weighty, grave and somber. Even the multiple skipping circuits looked somewhat bleak. Having said that, there is nothing wrong with a work that intends to be serious. Not at all. But for an entire hour? When tone and themes stay consistent for that long, I think they tend to lose impact rather than gain.

In addition, there was a curious trope with the costuming, which also relates to the lack of tonal change. Not in the design (Mary Domenico’s vision was terrific), but in how the costumes were used during the dance. As Fire went on, the cast would periodically shed the outer shell of their costume, revealing a new layer underneath. Some performers did this several times. I kept waiting and hoping that a different quality or state of being would also be ushered in, but it never was. It seemed an odd recurrence in a work that rarely shifted on the dynamic spectrum. 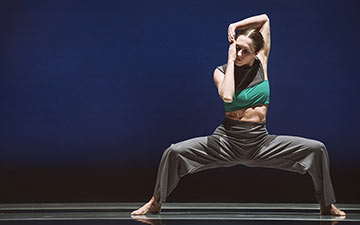 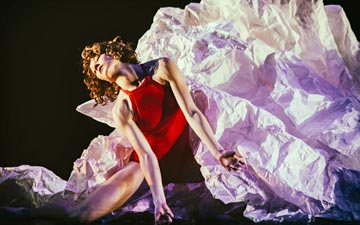 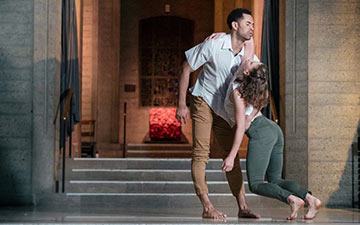