Under the direction of Iain Webb and his wife Margaret Barbieri, former dancers for the Royal Ballet and Birmingham Royal Ballet, the Sarasota Ballet has become an outpost of British dance, and, in particular of the works of Frederick Ashton. It’s a funny juxtaposition: the sun-drenched, high-humidity atmosphere of Florida’s Gulf Coast and Ashton’s crisp, buttoned-up style. But somehow it works. A few years ago the company hosted an Ashton festival. And it continues to explore the Ashton back catalogue. This week, it became the first American company to perform Ashton’s early work Apparitions, which hasn’t been seen anywhere for decades. The ballet was staged by Grant Coyle, principal dance notator at the Royal Ballet in London. The Sarasota audience, fed a steady diet of Ashton ballets over the last decade, seemed delighted.

Apparitions, made in 1936, dates from Ashton’s early period as choreographer in residence for the Vic-Wells Ballet, under Ninette de Valois, with Constant Lambert as musical director. Margot Fonteyn was a teenager. Together, Lambert and Ashton conceived a ballet based on the scenario of Berlioz’s Symphonie Fantastique, about an artist tormented by visions of an ideal but elusive love. Instead of Berlioz, they used various piano pieces by Liszt – including the familiar Consolation no. 3, “lento placido,” – orchestrated by Lambert. Here, the pieces were played with convincing sweep by the Sarasota Orchestra, under the baton of Ormsby Wilkins.

As if an Ashton rarity weren’t reason enough to catch this program, there was also the presence of Marcelo Gomes, former much-admired principal dancer from American Ballet Theatre, to recommend it. Gomes resigned from ABT early last year, after an un-specified allegation of sexual misconduct dating from eight years earlier. No further details have emerged, and Gomes has received support from various colleagues, including Julie Kent of Washington Ballet and Diana Vishneva of the Mariinsky. In the past year he has performed with Washington Ballet, Hong Kong Ballet, the State Ballet of Georgia and other companies, and has served as a regular guest artist at the Sarasota Ballet. Steps on the road to redemption after a sudden and dramatic fall from grace.

Gomes danced the central role of “The Poet,” around whom Apparitions revolves. As in Berlioz’s scenario, he pursues an ideal woman (in the Berlioz she is referred to as the protagonist’s “idée fixe”), takes laudanum, imagines a brief encounter with her at a ball, then sees her death cortege, and, as the drug starts to turn on him, has visions of a demonic orgy and goes mad. In Ashton’s version, he kills himself with the dagger we conveniently see in the first scene, where the poet broods in his high Gothic study. The sets, elegantly surreal, are by Cecil Beaton. All this Romantic hyperbole seems slightly silly to us now. But the theme of the doomed dreamer runs through Romantic ballet – see also, La Sylphide. Notably, in the same year Ashton made Apparitions, Léonide Massine created his own Symphonie Fantastique, using the original Berlioz, for Colonel de Basil’s Ballets Russes de Monte Carlo.

The 1936 cast was led by Robert Helpmann and the sixteen-year-old Margot Fonteyn. Helpmann was known as a powerful stage presence and actor rather than a virtuoso. As the alluring sophisticate, “The Woman in the Ball Dress,” Fonteyn revealed herself to be a major talent. And the program contains an extraordinary photo of her at the time, girlish and yet mysterious, looking faintly Spanish with her fan and dark eyes. A lasting partnership with Ashton was born.

The most impressive thing about this performance by the Sarasota Ballet is how convincingly it pulled off what is, inarguably, a stilted work, with more exposition than dancing. It’s clear that the dancers are fully immersed in the delicate, detailed vocabulary of Ashton; they look natural and comfortable in it, and that is no small thing. They bend and twist at the waist, and hold their arms in Ashton’s soft, airy shapes simply, without over-emphasis.

Gomes, in turn, has always been a convincing and sincere actor. In a role in which he is called to emote as much as to dance, he suffers and battles his demons with unabashed sincerity, all while performing limpid arabesques on demi-pointe and quick, crisp, darting footwork. Apparitions may not be a bravura role, but much of the choreography for the poet is detailed and very exposed, filled with balances and tricky transitions – entrechats into lunges, relevés into arabesques, petit allegro.

As the Woman in a Ball Dress, Victoria Hulland, a principal at the Sarasota Ballet, was also convincingly focused – a mysterious and alluring presence behind her fan, betraying nothing. Her choreography is tricky, full of jumps and gliding steps on pointe. As well as endless deep backbends; the ballet is full of them. One can only guess that Ashton was fascinated by the young Fonteyn’s supple back.

The high point of the ballet is the stylish ballroom scene, which takes place in a luminous white space upon which the shadows of musical instruments are projected. The ball gowns, poufy and pastel-colored, are a particular delight. Figures glide in and out of the wings; the men, dressed as Hussars, lift them into turns in which their feet skim the floor. The world is similar to that of Ashton’s “Valses Nobles et Sentimentales,” from 1947. This is followed by a surreal scene in which the sound of bells in the distance is embodied by an ensemble of sprites in spiky headdresses, who move their rounded arms from left to right, like bells in a bell-tower. They execute simple steps, like a series of pas de bourrées, over and over, a trick Ashton borrowed from Petipa.

After the interval, everyone was cheered up by a performance of Stars and Stripes, George Balanchine’s joyously tongue-in-cheek patriotic hit-parade from 1958. As the first section, led by Elizabeth Sykes, got underway, I was afraid that this would be a disappointingly polite and un-ironic rendition of the ballet. The pointe-work lacked attack, the smiles were glazed. But things improved with the second section, led by Katelyn May, as she flirtily played her trumpet to John Philip Sousa’s “Rifle Regiment.” The Ziegfield Girls effect started to come into focus. (High kicks galore!) The men’s “regiment” in section three was just right: like toy soldiers going through the ABC’s of male technique, advancing row after row. Ivan Duarte, lead soldier, nailed every double tour. By the time the pas de deux for “Liberty Bell” (Kate Honea) and “El Capitán” (Ricardo Rhodes) came around, all was right with the world.

It’s a tribute to Webb and Barbieri that the company can pull off these two ballets, so opposite in affect and physicality, back to back with convincing style. It’s even more impressive that Gomes doesn’t stick out in any way. Partly, this is due to his modesty as a performer; he’s not trying to show off. But it also shows just how well the Sarasota Ballet is dancing these days. 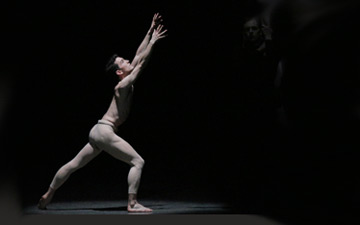