Ivan Putrov is an idealist. He dreams up his themed productions – Men in Motion, Against the Stream – as searchlights into the art of ballet, aspiring to educate as well as entertain audiences. He prefers not to label his projects as galas, with the implication that they are showcases for guest artists. Instead, there must be a unifying concept behind each programme.

He spends a lot of time assembling the contributions and performers he wants to fulfil his ambitions as a producer/director, even though the event might be for a single night. ‘Putting a show together is as thrilling as preparing for a dance performance.’ he says. ‘Maybe even more so, because such a variety of things have to come together to make something very special happen. For me, it’s another way of expressing myself by making new discoveries.’

Now 39, he continues to dance as an independent artist. A principal with the Royal Ballet until 2010, he has performed with companies around the world. ‘I’m lucky to have friendly locations where I can keep in training and make contacts with dancers. I need to be on good terms with their directors so that they can be released to me at the right time for one of my projects.’

Inevitably, however, cancellations happen at the last minute. How does he cope? ‘You breathe in and you breathe out and try to do your best,’ he says wryly. “I’ve spent all my life in the theatre, so nothing surprises me.’ His parents were both dancers in the National Ballet of Ukraine in Kiev. He first performed at the Opera House there at the age of ten, while training at the Kiev Ballet School. He won a prize at the Prix de Lausanne in 1996 and was invited to join the Royal Ballet School. Antony Dowell took him into the Royal Ballet company in 1998, promoting him to principal in 2002.

After he left, he put together his first project, Men in Motion, in 2014. His aim was to show how male dancing had changed over 100 years, from Vestris to Nijinsky to today’s virtuosi. Like a rival production at the time, Kings of the Dance (managed by Ardani Artists, Russian impresarios), it was a mixed bill, with familiar offerings and new commissions. Putrov has since taken various versions of Men in Motion to Ukraine, Italy, Russia, and Poland, as well as London, at Sadler’s Wells and the Coliseum.

His latest enterprise, Against the Stream, is to be a tribute to remarkable choreographers who changed the ecology of dance beyond recognition. ‘We might now take their achievements for granted, but they broke previous conventions and went against the stream. Because of their impact, they enabled others to move forward. I’m thinking of Ashton and MacMillan, Balanchine and Robbins, Lifar and Nureyev…. After them, the dance world was no longer the same.’

But what about Fokine and Nijinsky and Nijinska and Massine? ‘Of course, but I can’t fit all the mould-breaking choreographers into one programme. What I want is to mount performances that get as close as possible to the spirit of works that have been handed down by their creators within their original companies. In this globalised world, we need to see how these works are unique in the context in which they were created. The energy, the commitment the dancers bring to their own tradition is different from the ‘exported’ version of those ballets.’

Putrov’s aspiration is to present dancers who come from a particular legacy and who aren’t often seen on the same programme in the same country. Thus, Serge Lifar’s choreography should be done by dancers from the Paris Opera Ballet, Balanchine’s and Robbins’s choreography by New York City Ballet dancers, MacMillan’s by Royal Ballet dancers, Agrippina Vaganova’s by Russians – and so on. ‘Companies have been generous in accommodating me with dancers in between their commitments’, he says, trusting there won’t be unforeseen hitches.

From the Paris Opera Ballet, he has secured Mathieu Ganio, étoile since 2004, and Hannah O’Neill, premi`ere danseuse since 2016, who will dance the central pas de deux from Lifar’s Suite en blanc and the final duet for Cinders and her prince from Nureyev’s Hollywood-style Cinderella. Balanchine will be represented by his Diamonds pas de deux, danced by New York City Ballet’s Maria Kowroski with Marcelo Gomes. She will perform Robbins’s In G Major pas de deux with Tyler Angle, while Joaquin de Luz, recently retired from NYCB, will be the soloist in the Suite of Dances Robbins made for Mikhail Baryshnikov in 1994 to cello music by Bach.

Two pas de deux from the Russian repertoire, Vainonen’s Flames of Paris and Vaganova’s Diana and Actaeon, will be performed by Dimitry Zagrebin (formerly with Bolshoi, now with the Swedish Royal Ballet) and Katja Khaniukova (ex-National Ballet of Ukraine, now with English National Ballet).

Less familiar is the choreography Putrov has retrieved from the back catalogue of Royal Ballet’s Ashton and MacMillan. Matthew Ball and Mayara Magri will dance Ashton’s Awakening pas de deux from The Sleeping Beauty; Putrov himself will perform the Dance of the Blessed Spirits solo Ashton recreated for Antony Dowell in 1978. Dowell, who coached Vadim Muntagirov in the solo for an Ashton Rediscovered master class in 2016, has also supervised Putrov’s revival. MacMillan is to be represented by a trio from Images of Love (1964), based on Shakespeare’s sonnet ‘Two loves I have of comfort and despair’. Originally created for Lynn Seymour, Christopher Gable and Rudolf Nureyev, it will be danced by Magri, Ball and Putrov, coached by Seymour.

The international cast will perform to live music, conducted by Samuel Burstin from the Coliseum orchestra pit, on a stage that will be used for three English National Opera productions the following week. ‘Not much room for ballet sets’, says Putrov, ‘but as a dancer myself, I want my artists to be professionally presented, and to feel absolutely secure. I want the audience to appreciate that this will be a special experience to remember.’

He is indeed an idealist, having such high ambitions for a single evening’s performance. ‘Well, I hope to take the concept of Against the Stream elsewhere. There is so much more I could show, so maybe this is just the beginning’, he says. ‘I believe that humanity needs art, however ephemeral, and it gives me joy to make something magical happen.’ 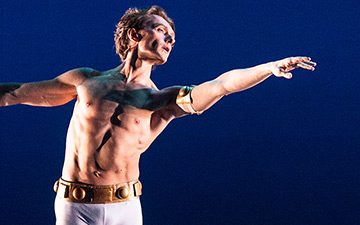 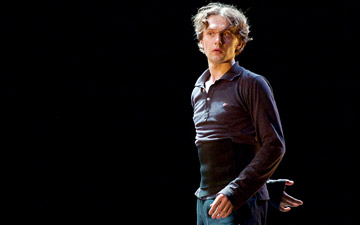