The key to La Fresque (The Wall Painting) is that it was originally commissioned in France as a piece to be seen by young people. Choreographed by Angelin Preljocaj, it’s based on a 14th century Chinese fable about a young man who falls in love with a beautiful girl on a temple fresco. There’s not much in the way of a plot or a moral, though Preljocaj sees his creation as exploring the mysterious relationship between representation and reality. So for youngsters, it’s meant to be like losing yourself in a video game animated by real life dancers.

The story starts in the historical present, with two travellers, Chu and Meng, on an arduous journey. They have to support each other in a storm, illustrated by a ghostly tangled projection, later revealed to be strands of hair. Hair plays a significant role in the fable. Black robed monks transport the travellers to a magical realm, where they see a frieze of five young women linked together.

As a series of scrims lift away, the seated women launch into a mane-tossing routine that entrances the men. Meng scuttles away, leaving Chu (Antoine Dubois) besotted with the long haired principal girl in white (Clara Freschel). He selects her for a pas de deux of balletic lifts as the projection trails its jellyfish tentacles above them. Nicolas Godin’s score now modulates from sinister electronics to lyrical harmonics, pulsing hypnotically.

Presumably time passes, as various episodes succeed each other in different types of dance and music. There’s a march for five couples in formation (men as well as women) and a frantic folk dance, incurring whoops of excitement and lots of leaps. The love match continues, sometimes in silhouette, mostly in slow motion as though in a trance.

Briefly, Chu leaves his loved one alone. She flings her hair in an abandoned solo, perhaps a premonition of what is to come. She tumbles, flails, kicks and runs in circles in the usual contemporary dance tropes before collapsing. An abrupt change of scene brings in black-fringed celebrants in square white masks: are they her Expressionist nightmare? Or is this a pre-wedding ritual, in which her four girlfriends perform an adoration of the virgin bride-to-be by binding her hair extensions into a chignon? Here is an echo of Nijinska’s Les Noces, a ballet Preljocaj knows well, having created his own version to Stravinsky’s music in 1989.

The preparations go on for a long time, involving a courtly minuet for the loving couple and jigging and jumping numbers for the guests, all wearing party outfits by Azzedine Alaia. A mesmerising sequence of aerobatics has the bridesmaids caught up in long skeins of hair dangling from the flies. They swing, climb and swirl upside down to hushed, breathless music. Eventually, Chen arrives as the bridegroom, bearing two bouquets of red flowers, the Chinese colour for a wedding.

The marriage is consummated discreetly. No sooner is the couple asleep than warriors emerge from a light box to abduct Chu and return him to reality. He awakes to find his fellow traveller Meng, who has missed him for only a few minutes. When they look back at the temple frieze of young women with long hair, the central one has a red flower tucked into her chignon – the symbol of a married woman.

At 80 minutes without an interval, La Fresque is picturesque but inconsequential. The characters are cyphers, the setting a mirage. What kind of love has transformed the girl in the fresco? As a theatrical spectacle, the collaboration between set and costume design, lighting, video effects and dreamy music is effective, but the choreography conveys nothing to hang on to. Preljocaj has devised more impressive rituals than this, aimed at grown-up sensibilities rather than entertaining youngsters. Sadler’s Wells should continue to programme his tougher work, as it used to years ago. 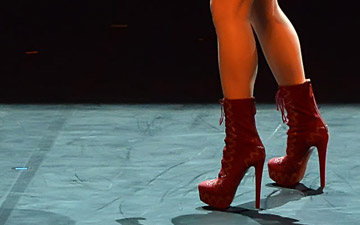 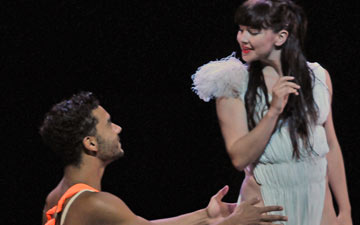 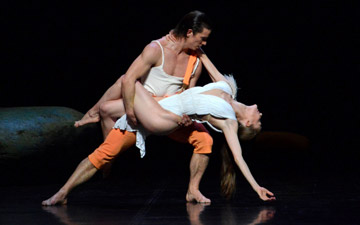