Impermanence’s ambitious choice to perform Bertolt Brecht’s first full length play, Baal, through its own brand of dance theatre doesn’t disappoint. Through skilful manipulation of the original text, envisaged through expressionistic dance, narrative, film, music and even singing, the four performers, (artistic directors Roseanna Anderson and Josh Ben-Tovim with Sonya Cullingford and Alessandro Marzotto Levy and musician Robert Bentall) create a show which reflects on the complexities of Brecht’s story, both in structure and content.  Non-linear, poetic language both spoken and flashed up on screen spills randomly into chaotic scenes – twenty-two in total, some of which are abstracted from the original story, others directly quoted. A whirl of bodily and visual commotion mobilizes the work at some pace and contributes to its restless, impatient mood suggesting the turbulence of Germany circa 1904, when Brecht wrote Baal. However, it could equally reflect on the mass uncertainties of more recent times.

Layer upon layer of possible meanings explore the life of anti-hero, Baal, a gifted poet whose greed and self-interest set him on a journey of destruction and debauchery. Loved and praised by all the wrong people, we witness his decline and fall; his miserably lonely death a grim penalty for a life squandered. Following or even comprehending the text is an impossible task for the viewer, assaulted and distracted by an overload of stimuli, but true to Brecht’s intentions when he wrote the story, “nothing is understood, but some things are felt”.  Impermanence interprets the text largely through affect – by creating arresting visual imagery and choreography that troubles us. The character of the decadent, chauvinistic Baal is interchangeably performed by all cast members, both in unison groups or through individual solos. Each dancer reveals a different aspect of this frenzied, toxic man, whether it is cruelty, seduction or arrogance.

Baal’s exploitative interactions with lovers and friends are explicitly conveyed through rapacious duets but there are other quiet moments when he’s portrayed in deep reflection surrounded by nature. Evocative film footage suggests Baal’s destructive journey through city and countryside: pursuing a woman along a derelict railway line; meeting his friend in a bar, or meditating, waste deep in a river, foregrounded by a majestic forest. This recurring and stunningly beautiful image of a man immersed in water, as if enacting a cleansing ritual, brings a welcome stillness and purity to the frenzied messiness of the work. Nature is an ever-present theme and conveys both violence and destruction in footage of scorching planets and nightmarish hurricanes, while rivers and forests also provide moments of tranquillity and hope.

Robert Bentall’s electronic music which he plays live on a nyckelharpa (an ancient 16 –stringed Swedish keyed fiddle) is melodious and haunting as he inhabits the stage, an extraordinary musical presence. His hybrid music influenced by traditional Scandinavian folk, veers off into both classical and experimental electro acoustic genres, fascinating in its complexity. Another unexpected musical appearance is that of David Bowie’s two famous tracks Ashes to Ashes and The Ballad of the Drowned Girl which although somewhat random, nevertheless fits with the multi-dimensional quality of Baal and its portrayal of downfall.

Baal conveys a convincing Brechtian essence framed through a contemporary gaze. It’s an intriguing work that celebrates the company’s wild creativity, bold performing and fascinating, well researched interpretations of the original story. However, I feel totally gorged by the multiple references, overload of ideas and presences on stage and want to break the content down into small, simple scenes in order to digest it properly and feel its depth. 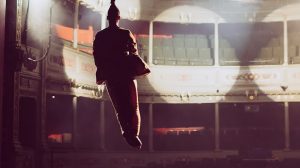