One of the wonderful things about the fall season at The Joyce this year has been the focus on live music. Almost every show there has had it. With it has come a noticeable increase in the number of programs devoted to tap dance, an art somewhat neglected in recent decades that is finally having a resurgence in popularity and stage time. A sign of health within the tap sphere is the sheer diversity of these shows. Each choreographer has a signature and the urge to experiment in different ways, so that one tap performance is nothing like the next.

The evening currently at The Joyce, And Still You Must Swing, is the creation of Dormeshia, a veteran tap dancer who used to go by the name Dormeshia Sumbry-Edwards. She has appeared in a long list of productions, from After Midnight to Bring In Da’Noise, Bring in Da’Funk, to Sophisticated Ladies. Some have called her the greatest tapper of her generation. I’m wary of such titles, but what I can say is that she is a dancer of enormous sophistication, finesse, variety, and subtlety. One of the chief pleasures of And Still You Must Swing is the variety of dynamics, something often missing in tap performances, made worse by the overuse of amplification. Like the soprano Montserrat Caballé, Dormeshia is able to muster the most impossible pianissimos, with a clarity that sends shivers down your back. Her arms and fingers caress the air, creating a graceful, almost old-world (à la movie musicals) accompaniment for her feet. The clarity of her footwork is a wonder. No matter how fast she goes – and she can go incredibly fast – she never sacrifices beauty or tone. You feel that she could subdivide the beat to infinity, and still you’d hear each individual strike of the floor. She also dances as if she had a secret; I’ll not soon forget the little smile and wave she gave at the end of one of the group numbers. In her silver high-heeled tap shoes she looked like a queen. (She also wears gold low-heeled ones, as do the two men.)

Dormeshia has put together a team of extraordinary individuals, each with his or her own style and talents, in what is essentially a musical set, without a unifying theme or concept. It doesn’t need one. They speak through their dancing, together and alone.

Derick K. Grant is an affable giant, whose dancing contains a surprising combination of lightness and heft, lumbering heaviness and grace. One of his greatest gifts is the way he throws himself into a move, giving the impression he will tip over, only to somehow glide magically into the next step. He keeps you on the edge of your seat and is, at the same time, capable of great sweetness. Camille A. Brown isn’t a tapper, but her entire body is a rhythmic and expressive instrument. At times, she gives the impression of scooping the sound from the percussionist with one hand, then bending it with her powerful arms and back. Her dancing, which is really not of any school but her own, connects percussive dance with its African and African-American roots, the call and response of the drummer and dancer, the awakening of the spirits through rhythm and movement.

My personal favorite, besides Dormeshia herself, is Jason Samuels Smith, a dancer of almost anarchic spontaneity. In his solos, he tends to dance with his eyes closed, as if listening intently to his own body and its response to the music. You never know what he’ll do next. He dances in syncopated bursts, creating varied sounds: scrapes and stutters and elaborations on a rhythm picked up from the piano or bass. His legs fly in all directions at once. Just as unexpectedly, he’ll slip into a groove; you wish it would go on forever.

The jazz band, a pianist (Carmen Staaf), bassist (Noah Garabedian), and two percussionists (Winard Harper and Gabriel Roxbury), also excellent, sit to one side of the stage and are given several purely musical interludes. (They even played a samba.) I loved the moment when, in an easy-going passage of sliding steps for Dormeshia, Grant, and Smith, the bassist broke into a little quotation from Lou Reed’s “Walk on the Wild Side.” Was it spontaneous? It seemed like it. A smile of recognition rippled across the stage, and then the moment melted away into another wave of invention.

“Swing is from the inside,” the legendary tap dancer Jimmy Slyde once said, referring to this special, difficult-to-define quality. Mastery, love, ease, spontaneity, self-assurance, truth – all are elements of swing. It may be difficult to define, but you know it when you see it. Dormeshia and co. have got it. 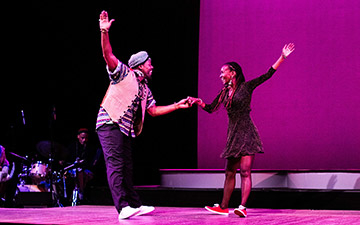 Dormeshia – And Still You Must Swing – streamed recording 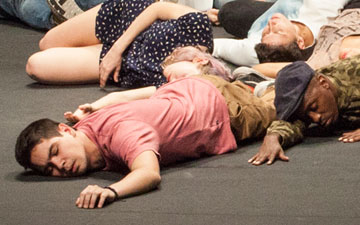 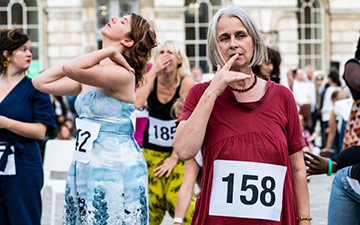 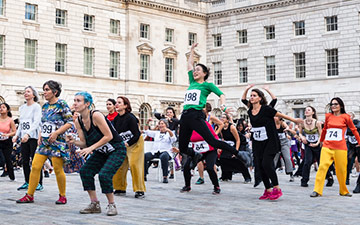