When I saw The Snow Queen during its premiere run in Edinburgh, I made a pact with myself to try and see it again later in the tour with different casts and also to see how it bedded down. It was an easy decision because Christopher Hampson’s Snow Queen impressed many scribblers with mostly 4 and 5 star reviews and I was certainly impressed, as my earlier review amply shows; and I remain mightily impressed, but I want to reflect here on some general points and the different dancers, rather than give a full account again.

Besides the live touring, Snow Queen was also screened at Christmas across Scotland and, later, the wider UK. Anecdotally some have said it seemed hard to follow what was happening, particularly at first. If you are seeing the show live I certainly feel folks need to read the programme or free cast-sheet synopsis to get a rough idea of the story and I’m sure recordings could do better in explaining the plot for the casual audience as well. But on seeing the show run twice in a day I was also amazed by all the narrative detail that’s embedded across the stage action and which I had missed in first viewings. It’s a work that will bear repeat viewings as we unpack more subtlety in the story and different dancers colour it further. All up, its a production you can grow with and will wear well over the years to come. Just do a bit of homework.

One thing that some commentators picked up on was the end, which seemed a little perfunctory for a deathly battle between the Snow Queen and her sister. Well the ending has changed slightly and while their plunge though the enchanted mirror now feels stronger, the battle itself still feels too short and less then titanic. The ballet is not long – two acts spread over 1 hour 45 minutes – and I think this section could be extended. Possibly some time could be saved in the act 1 Market Place scene-setting. But overall I like the sense of pace and you need to keep your wits about you because there is little padding-out of the action here.

In seeing it again, the parts that really jumped out at me were the bandits’ encampment group number with its particularly stirring Rimsky-Korsakov, and the audience generally gave their greatest and warmest applause for it. Of the pas de deux it is the one towards the end between the Snow Queen and and ensnared Kai that again sets the pulse racing as music and classical ballet movement show the troubled relationship. The final lovers’ pdd (Kai and Gerda) is fascinatingly different – it’s not so much about the steps but the human emotions laid bare and the simple hugged ending is touchingly perfect.

The matinee show was led out by Araminta Wraith as the Snow Queen, supported by young dancers Roseanna Leney as Gerda, Jerome Barnes as Kai and Anna Williams as Lexi/Summer Princess. Wraith is well suited to the Snow Queen role – a mix of distant imperiousness but also played with a rather sad human dimension: a mythical character that you could believe in and actually have some sympathy with. I also really warmed to Jerome Barnes; Kai might be a boy next door character but he executed the steps with a cheeky and rather pushed panache. He only joined the company 2½ years ago and on this showing is one to watch. He needs to work on his partnering, though. But as a collective group, despite a couple of headdress malfunctions, they brought the ballet alive for an appreciative full house that often let rip with applause, particularly in the second act.

The evening performance was led out by Katlyn Addison, a guest soloist from Salt Lake City-based Ballet West who trained in Canada and also danced at Houston; and Addison certainly has the sparse and steely look I often associate with North American dancers. Her footwork was sharp as sharp can be and fits stunningly well with a role built on shards of ice and broken mirrors. It was a commanding performance technically, if dramatically I didn’t so fully believe in it as I had earlier in the day. Kai was danced by the recently promoted to principal Evan Loudon: a safe pair of hands, who delivered with Addison the best pas de deux of the show with faultless clarity. And Araminta Wraith was back on stage again, this time as Gerda. One moment particularly resonated when, just after Lexi and Kai meet, she sees the danger of Lexi and in guiding Kai away turns to give Lexi a look of withering and worried disapproval. So believable in darker drama, as she was as Elizabeth Proctor, in The Crucible, I only baulked somewhat at her slightly OTT toothy happiness come the end – it felt less nuanced. As Lexi, the tall and commanding Grace Horler almost stole the show. A strong dramatic performance that certainly projected the ‘don’t mess with me’ image, hers was I thought the best Lexi of the three I’ve seen and I want to see Horler in other dramatic roles of consequence.

It’s a cliché to say that everybody in a company made the show a success, but it’s a cliché you will have to put up with, I’m afraid. There are many soloist and cameo roles in The Snow Queen and the company shone brightly in dancing them and if I didn’t know it before I did know by the end of the day that Scottish Ballet has much strength in depth. I will, though, mention just one other dancer – Alice Kawalek. An Artist in the company for less then 2½ years, she was a fizzing dynamo of activity in the (circus) Ballerina role. It’s a role that’s made complete by Lez Brotherston’s costuming – in fact I think his dustily dark throwback designs for the entire circus are probably the best he’s ever done.

An away-day from London to Glasgow isn’t always the easiest thing to make happen (and in truth I had a horrid journey home), but I wish the London writers were able to do such things more easily. It’s a great thill to see a company at another level of dancing and understanding. 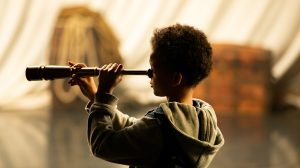 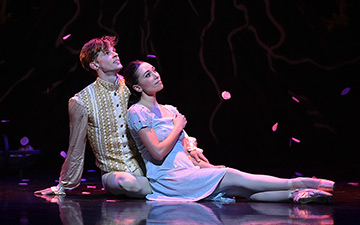