Scottish Ballet have come up with a delightfully life-affirming present to blow away the Covid blues this Christmas. It’s not a film of an existing ballet, as we usually see at this time of year, but a ballet feature film – something made just for the camera and in which the camera is choreographed into the action. The result is an exhilarating ride full of exquisitely different and surprising perspectives.

Conceived by Christopher Hampson and Lez Brotherston with film-making duo Jess & Morgs (Jessica Wright & Morgann Runacre-Temple), the hour-long film was made on location in Edinburgh and Glasgow with most of the dance action filmed at the company’s Tramway base. Making anything under Covid rules is a nightmare of difficulty, but you would never know it from the escapist and charming result. The story is simple, as a young boy accidentally enters a closed theatre and the sets and costumes come to magical life and take him on a dance adventure using extracts from Peter Darrell’s Nutcracker and Hampson’s Snow Queen. It’s pretty tightly integrated and, besides the music you’d expect of Tchaikovsky and Rimsky-Korsakov, features some new compositions by the excellent Frank Moon.

The revelation is of the Scottish Ballet dancers, who here you see in much closer detail than normal and they act and dance their socks off. Too often we see dancers from afar and don’t always appreciate just how dramatically they use their faces as well as their bodies and it’s what lifts The Secret Theatre up another level. That and the unusual views conjured by the filming of Jess & Morgs. The entire company get a look-in in scenes which include the town square visiting circus, Roma encampment and finale from Snow Queen with the snowflakes, Mirlitons and Sugar Plum from Nutcracker. I have to mention exceptional performances by Bruno Micchiardi as the louder-than-life and knowing Ringmaster, Constance Devernay’s imperial and snarling Snow Queen and Leo Tetteh as the wandering and thunderstruck Young Boy at the heart of it all.

But crowning it all were Sophie Martin and Jerome Anthony Barnes in the Sugar Plum pas de deux. Now a mum, Martin has come back at the top of her game – a gorgeously stunning mix of warmth and distant glamour, every movement and gesture perfectly weighted. Such bliss. Barnes has rightly just been promoted to Soloist – only 3½ years in the company and yet looking super-sharp and honed as the Nutcracker Prince. One to particularly watch in a company bursting with talent.

The other revelation is the sets and costumes of Lez Brotherston. We’ve seen all the costumes before, but seeing them close up, in such variety and in quick succession rams home what a national treasure he is as a dance/theatre designer. The close view also shows how well made they are: but all of what we see is such a strong group effort by all involved. This may not have been the original plan for Scottish Ballet’s Christmas show, but out of adversity, something extraordinary and different has evolved. I hope it’s a creative strand which can be taken forward in new projects. And the best bit is that The Secret Theatre is entirely free to see – visit the Scottish Ballet website and sign in for a viewing. A huge success – bravo to all involved in such a special film. 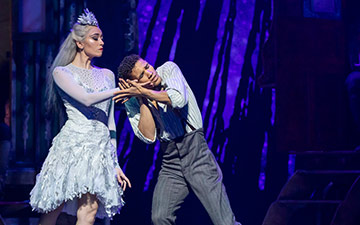