“Space is the Place,” was the Sun Ra anthem. And those were the words for the last song in a tribute to the late pianist and Arkestra leader, conceived by Nona Hendryx and presented by Met Live Arts, in conjunction with and commissioned by Harlem Stage, at the Temple of Dendur in the Metropolitan Museum.

Sun Ra (1914-1993) was an Afro-futurist long before the term was invented. As a jazzman he abandoned his original name, Herman Blount, not suitable for one who claimed to be a being from Saturn, a bringer of peace. Sun Ra could play all kinds of piano, from the oldest to the newest, incorporating all kinds of jazz into his avant-garde Arkestra, from his own stride piano to free jazz. The Arkestra (which still continues under saxophonist Marshall Allen, who joined it early on) produced spectacles, with costumed musicians and dancers. Egypt was an influence – Ra is the Egyptian god of the sun – so what could be a more suitable setting for a tribute to Sun Ra than the Temple of Dendur in the Metropolitan Museum’s Egyptian wing?

It was a spectacle indeed, even before the concert officially started. The four dancers, including the choreographer, Francesca Harper, strode through the aisles, gesturing like living sculptures, which would have been noticeable even if they weren’t called “Dancers and Living Futurism Sculptures” in the program. Their extravagant costumes, combining Egyptian motifs with Native American and sci fi ones, were designed by Virgil Ortiz. Racing circles were projected over the far wall (the band faced the temple; the audience faced the band and that huge wall) and, before the concert, over the ceiling high above.

The dancers in their fabulous costumes were important, but largely decorative. They danced up and down the aisles and in front of or beside the stage, but never mounted it. That belonged to the musicians, an excellent group, led by Musical Director and trombonist Craig Harris, who had worked with Sun Ra in the Arkestra and who composed music for this tribute evening, and Artistic Director Nona Hendryx, who emceed, sang, led the two other vocalists, and composed some of the music.

Carl Hancock Rux, one of the vocalists, wrote and declaimed Sun Ra-appropriate calls, such as “transformation,” and the words to the songs kept up such themes. We heard that all was cosmic dust, that we gave birth to the expression of love. Hendryx and Keyontia Hawkins sang beautifully together “to the rhythm of the dance, to the rhythm of the spheres.” Toward the end Rux told us, “We have traveled across the universe.”

Sometimes Rux reminded us that all is not well and we heard a recording of Sun Ra himself speaking about a man killed by a policeman, bridging the past and the present, but, one can hope, not the future. Still, the emphasis was on the positive future: “You will find peace of mind.”

The music was vigorous and eclectic jazz, moving among styles as the Arkestra did, and providing many pleasures, though I missed Sun Ra’s solo excursions into 1930s style piano. But the ensemble was often rich, involving the singers and many instruments – drums, electric percussion, acoustic and electric bass and guitar, woodwinds, synthesizer, piano, and Harris’s heraldic trombone, including, particularly from Harris, some impressive solos. There was a touch of free jazz cacophony, just a spicy touch, and toward the end, the surprise of electric organ tones.

The instrumentalists were in black, but the vocalists wore elaborate silvery costumes, particularly the two women, and most particularly Hendryx with her spiky headdress and her back’s array of sharp spiked sun rays (which she removed). Nubby silver columns spurted on the stage. The projections against the enormous rear wall changed, ranging from pink curlicues to moving dots.

The dancers, of course, also moved among us with graceful extending arms. Each was in a quite different costume, which projected something mythic. With no clues in the program, we made our own associations, but now I have not only attached each dancer to a costume, but know what Ortiz, the designer, intended them to represent.

I thought of Francesca Harper, the choreographer, in her silver headdress and encircled neck as Nefertiti; in fact she was the goddess Isis, sister and wife of Osiris, mother of Horus. I thought of Jaime Rodney as an Egyptian falcon god, but got the bird wrong. He was ibis-headed Thoth, god of writing, magic, wisdom, and the moon.

Robert Mason, like Harper, was not masked, and wore an elaborately geometric black and white patterned bodysuit and cap. He represented a Runner in the 1680 Pueblo revolt against the Spanish in New Mexico, driving the Spanish settlers out. Virgil Ortiz is from Cochiti Pueblo, and the figure and patterns stem from Cochiti pottery.

Aaron Ricks’ costume was particularly striking and mysterious. Ricks is very tall, and though clearly a man, he wore metallic breasts, and an enormous crumpled skirt. Spiked sun rays, similar to those Hendryx initially sported, sprouted from his back and his head was helmeted, masked, and topped by a spiky headdress. He represented Cuda, Aeronaut, Captain of the Survivorship Armada.

Although I had learned about the 1680 Pueblo Revolt while in New Mexico, Cuda was a mystery. On Google, “Cuda, Aeronaut” leads immediately to Virgil Ortiz. Ortiz’ artwork centers on the Pueblo Revolt, “contemporizing the central characters as sci-fi superheroes to engage younger generations.” Though hardly any of us knew this at the Temple of Dendur, Cuda was certainly impressive, and one can imagine how intrigued Sun Ra would have been by Ortiz’ designs and astral projections.

The dancers were generally graceful figures, singly or as duos, sometimes even gliding, floating down an aisle, gesturing with pointing or wide arms. At one point, in front of the stage, they raised ceremonial staffs, holding them horizontally before marching up aisles with them. At another they danced in the aisles, two at each side, with lights twinkling on their fingers. They could be slow and sculptural, but eventually they twirled and whirled. Cuda’s rays shifted with the rhythm. Standing a bit beyond the stage, Harper seemed to watch protectively over it all.

With the “Space is the Place” finale, the initial projected circles returned, circling back to the beginning. The music remained rich, then wound down. The dancers glided away. 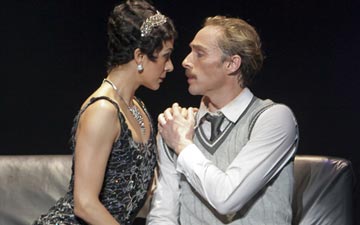 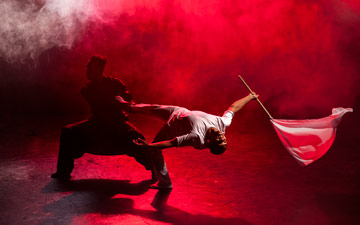 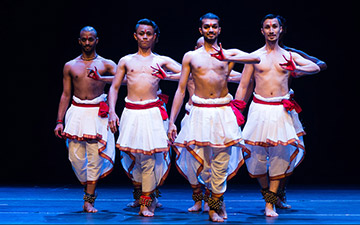