Nikolaj Hübbe, artistic director of the Royal Danish Ballet (RDB), decided to make his latest production of August Bournonville’s La Sylphide freely available online because tickets for November’s live performances in the Royal Theatre had been in such demand. The in-house recording of the premiere on 24 October features Ida Praetorius as the Sylph, Jon Axel Fransson as James and Kizzy Matiakis as the witch, Madge – her last role with the company.

She retired on 14 November, visibly pregnant in a joint farewell interview with veteran critic Erik Aschengreen. Kizzy, née Howard, started her dance training in Leo Kersley’s school before moving to the Central School of Ballet. After three years with the Royal Swedish Ballet, she joined the Royal Danish Ballet, and married fellow dancer Tim Matiakis. During her long career, she has performed an impressive variety of roles with the company, concluding with an unusual interpretation of Madge – of which, more later.

This is Hübbe’s third production of La Sylphide, a staple of the Danish Ballet’s Bournonville repertoire. It’s his prettiest version, after a stark production in 2014 with Madge as a sinister male figure, not a vengeful woman (whatever the sex of the performer). The new designs are by Anja Vang Kragh and Mia Stensgaard, both of whom have designed Royal Opera productions in London. Stensgaards’s designs for Kenneth MacMillan’s Manon, originally for RDB, have been seen in English National Ballet’s production of Manon.

The set for James’s Scottish farmhouse in Act I is intimately linked with the natural world outside. The interior is decorated with greenery for the celebration of his betrothal to Effy. Decorative curtains at the rear of the stage then become translucent when the Sylphide invites him to enter her woodland domain. Since the painted vegetation is primarily pink and purple, this cannot be a Scottish grove or glen. If it’s James’s fantasy world, how come he dreams in pink as an escape from his responsibilities as a married landowner? Perhaps the clue is in the unlikely hue of his bright blue tartan Highland dress. He’s no son of the soil, unlike soberly kilted Gurn (Benjamin Buza), in love with Effy.

Fransson has a Romantic hero’s old-fashioned good looks as James and an arrogant air as he lords it over Gurn. He’s harsh with Matiakis’s Madge, wanting to throw her out of his house when she seeks warmth and shelter. In Bournonville’s scenario, James sees her as a bad omen before his wedding, not simply as an intruder. He is persuaded to let her stay by Effy and her friends, who want their fortunes told. Matiakis’s Madge is not an old hag but a strangely alluring creature swathed in a voluminous kaftan. She entertains and manipulates the guests, insulting James. She wields her stick as a weapon, raising it above her head as she confronts him before choosing to creep away, assisted by Gurn.

Effy (Stephanie Chen Gundorf) is given an interpolated solo to show how exhilarated she is by her betrothal. Gundorf bounds happily, her neat feet in soft leather laced shoes. James and Gurn compete with each other in springy beats and jetés, covering more ground than she does. Though Fransson has an impressively airy jump, he doesn’t have the deep plié a true Bournonville dancer needs. Buza digs down to power his leaps; he’s an earthy rival for Effy’s affections, even though she spurns him.

Praetorius’s Sylphide floats convincingly in her grands et petits jetés as well as being suspended by wires in mid-air among the scenery. She wears a diaphanous long skirted tutu, with outlines of leaves on its upper layer. When her retinue of similarly dressed sylphs emerges in Act II, the gauzy set is filled with floating fabric. Praetorius is an elfin being with an impish smile, both innocent and seductive. She knows full well what a tantalising effect she has on besotted James as she tells him not to touch her.

She’s a drama queen when she turns up at his window, weeping extravagantly because he has vowed to marry another. Hübbe has abbreviated a lot of the mime in the ballet, so she doesn’t get to explain that she has loved James ever since she first saw him, hovering over him day and night to protect him. Her mood changes swiftly from despair to gleeful joy, clapping her hands and wrapping herself in the blue plaid scarf meant for Effy. Gurn enters and calls the others, only to be mocked when there’s no sign of her. Since he doesn’t mime that the female stranger has wings, is the Sylphide only visible to James?

Once James has been lured into the Sylph’s pink and mauve domain, her offerings to him are unclear, unless you know them already: she gives him strawberries to eat, spring water to drink, catches a butterfly he begs her to release. Like his later rejection of her present of a bird’s nest, these special moments are hurried over. Fransson needs to have more time to convey that James has confused feelings about being with the wilful Sylphide and abandoning Effy. He is distracted by dancing among the sylphs who have been summoned to entertain him, led by bright-eyed Astrid Elbo. Close-ups show how charming they are, very different from the cold-hearted wilis in Giselle.

Madge, however, is ruthless. When the villagers enter in search of James, she inveigles Gurn into denying that he has found James’s cap. She prods him into remembering her prophecy that he will win Effy’s hand. His proposal is accepted. Gundorf mimes pragmatically that he’ll do, and they go off together. Madge turns her attention to James, conning him into believing her enchanted scarf will secure the Sylphide for him. Commanding though Matiakis is, their interaction needs even greater urgency, with James willing to give all he has for the magic talisman.

Praetorius is enchanting as the carefree Sylphide, intrigued by the scarf until she realises it’s not the betrothal gift she hoped for. Her wings drop off and blind, she feels her senses failing. Tenderly, she assures James that she truly loved him and gives back his ring as she falls into the arms of her attendant sylphs. Her sweetly mischievous face goes blank as she is carried off – a most affecting death in the best Bournonville tradition.

Matiakis’s return is both vicious and surprising. Madge arrives full of venom, reminding James of how he tried to evict her. She forces him to watch the funeral procession of sylphs passing into the heavens. His pleading gesture asks why his punishment had to be so extreme, before he collapses. As the curtain falls, Madge’s upraised arms start to crumple and her triumphant expression changes. Instead of glorying in her revenge, Matiakis’s witch is realising the full extent of what she has done. Chilling indeed.

The production works well on screen, even though the lighting and filming leave something to be desired. (This is an archive recording, not a film relay.) The cast are all dramatic dancers with a keen sense of the Romantic ballet’s tradition, passed on to them by veteran performers such as Sorella Englund and Anne Marie Vessel Schlüter, as well as Hübbe himself, a notable James. They benefit from an exuberant conductor, David Levi, and musicians who haven’t had to distance too widely in the Royal Theatre’s capacious pit. A particular pleasure at the end of the screened performance is the way everybody on stage bows first to the Queen of Denmark’s box and then to the rest of the audience. This is company etiquette, showing respect (and affection) when Queen Margrethe is present. A keen supporter of the ballet, she would have attended the first night party backstage to congratulate all those involved – if Covid-19 precautions permitted. 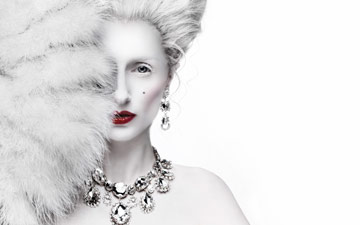